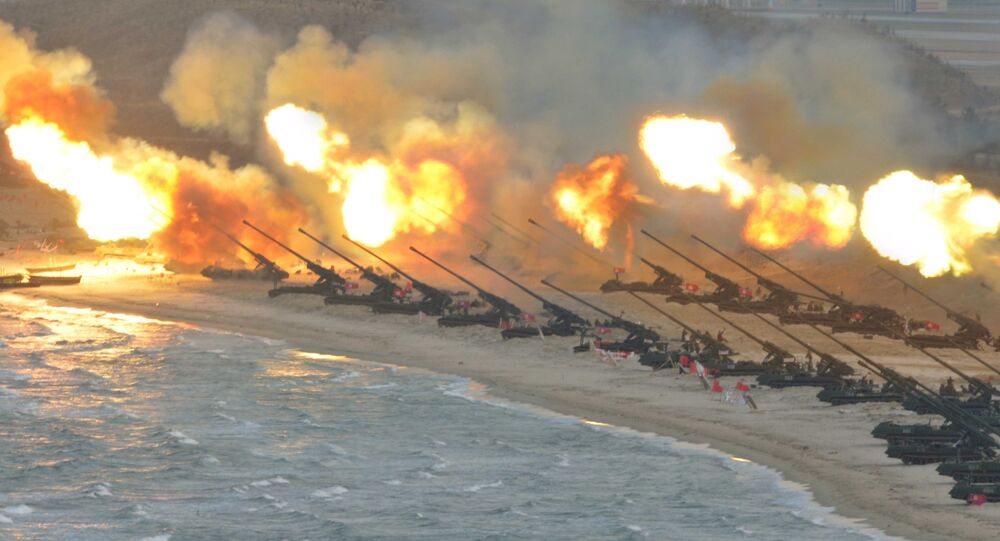 North Korea has carried out massive artillery drills, possibly the largest in the country's history, to mark the 85th anniversary of the founding of the country's Army. Speaking to Sputnik, Chinese and Russian experts explained why the exercises may actually be a sign that Pyongyang is seeking some kind of compromise with the US and its allies.

The North Korean military staged massive long-range artillery drills in the country's east near the city of Wonsan on Tuesday, marking the 85th anniversary of the founding of the Korean People's Army.

South Korean officials told the Yonghap News Agency that the live-fire drills were closely monitored by the South Korean military. One report said that between 300-400 artillery pieces were used in the exercises. Sources also indicated there was a strong likelihood that North Korean leader Kim Jong-un attended the drills.

© AP Photo / Jun Dumaguing
‘Undisguised Military Blackmail’: US Nuclear-Powered Sub to Join USS Carl Vinson Near Korean Peninsula
The exercises coincided with the military exercises being held by the US and South Korea off the western coast of the Korean Peninsula. Against the background of a tense security situation, the US has sent the USS Carl Vinson supercarrier to the region, with a nuclear-powered submarine also set to join the carrier group off the waters of the peninsula in the coming days.

About 28,000 US troops are permanently stationed in South Korea, and Washington has repeatedly rejected signing a formal peace treaty with Pyongyang. Legally, the US and North Korea are still at war, with hostilities held at bay by an armistice signed in 1953, the year the Korean War officially came to an end.

© AFP 2021 / Ed JONES
Korean People's Army (KPA) artillery pieces displayed on Kim Il-Sung square during a military parade marking the 105th anniversary of the birth of late North Korean leader Kim Il-Sung in Pyongyang on April 15, 2017.
© Sputnik / Iliya Pitalev
All Against One: S Korea, Japan, US Agree to Tighten Pressure on N Korea
On Tuesday, officials from South Korea, Japan and the United States agreed to increase pressure on Pyongyang over its ongoing nuclear and missile testing, South Korea's Special Representative for Korean Peninsula Peace and Security Affairs Kim Hong-kyun said. For his part, US Special Representative for North Korea Policy Joseph Yun said that it was clear to Washington that North Korea was not yet ready for dialogue.

North Korea was widely expected to mark Tuesday's anniversary of the founding of the Korean People's Army with some grand demonstration of force, with experts fearing that new missile or nuclear testing was likely.

Zhan Debin, the head of the Center for the Study of the Korean Peninsula at the Shanghai University of International Business and Economics, told Sputnik that the fact that North Korea staged artillery drills instead may be an indication that they are willing to compromise.

"The fact that North Korea did not conduct nuclear testing, or undertake some other 'more serious actions' can be regarded as an attempt at some kind of compromise in the face of pressure from the outside world," the expert explained. After all, "if the DPRK had conducted nuclear testing, or launched a ballistic missile, it would have met with a tough response from China and the United States," he added.

© AFP 2021 / JUNG Yeon-Je
US soldiers take a position during their drill at a military training field in the border city of Paju on March 7, 2017. The US military has begun deploying the THAAD anti-ballistic missile defense system to South Korea, US Pacific Command said, with its first elements arriving on March 6, to protect against threats from North Korea

Pyongyang, Zhan noted, seems to have gained a pretty clear understanding that further nuclear testing in the present circumstances would be harmful to its own interests.

For example, "nuclear testing could affect the situation surrounding the early presidential elections in South Korea; this is something North Korea is also aware of. If North Korea conducts further testing, this will complicate the formation of North Korea policy for Moon Jae-in, the South Korean presidential frontrunner. He will be forced to react more harshly, which in turn could weaken his former approach and change the tone of dialogue with Pyongyang. Therefore, if North Korea had gone ahead with its nuclear tests, it would have lost more than it gained."

"It must be admitted that the current situation has been sorting itself out in a rather graceful manner," the expert said, speaking to Radio Sputnik.

"On April 15 (the 105th anniversary of the birth of North Korean founder Kim Il Sung), Pyongyang marked the occasion with a parade. Its planned missile test did not get off the ground. Then, on April 25, when everyone expected either a launch or an explosion, they did something they have every right to do in the current circumstances," (staging the artillery drills instead).

This, according to Lantsova, demonstrates a sense of caution from Pyongyang. "In the end, everyone engaged in some saber-rattling, but the situation on the Korean peninsula is likely to gradually return to normal."

In these circumstances, the academic suggested that further pressure from the US, Japan and South Korea will only serve to aggravate the situation. Instead, the sides must somehow agree to sit down at the negotiating table.

"More pressure will only convince the North Korean leadership that they need to continue to develop their nuclear program. In the current circumstances, it's worth recalling the experience of the six-party talks held in the early 2000s, which served as a platform for interaction with the North Korean leadership." Today, these have been forgotten, according to Lantsova. But perhaps remembering this experience might be a good idea."

© AP Photo / Susan Walsh
Trump Tells UNSC Members Status Quo on N Korea 'Unacceptable', Calls for More Sanctions
For his part, Zhan Debin emphasized that achieving a breakthrough in its nuclear testing will continue to remain a key strategic goal for Pyongyang, notwithstanding any pressure North Korea may face from the international community.

"Essentially, if North Korea succeeds with a breakthrough in nuclear testing, this would be of great importance for the North Korean army, its unity and morale. After the army gets stronger, the North Korean regime will also become more stable and surefooted," the expert concluded.

Air China to Resume Flights to Pyongyang in May

All Against One: S Korea, Japan, US Agree to Tighten Pressure on N Korea