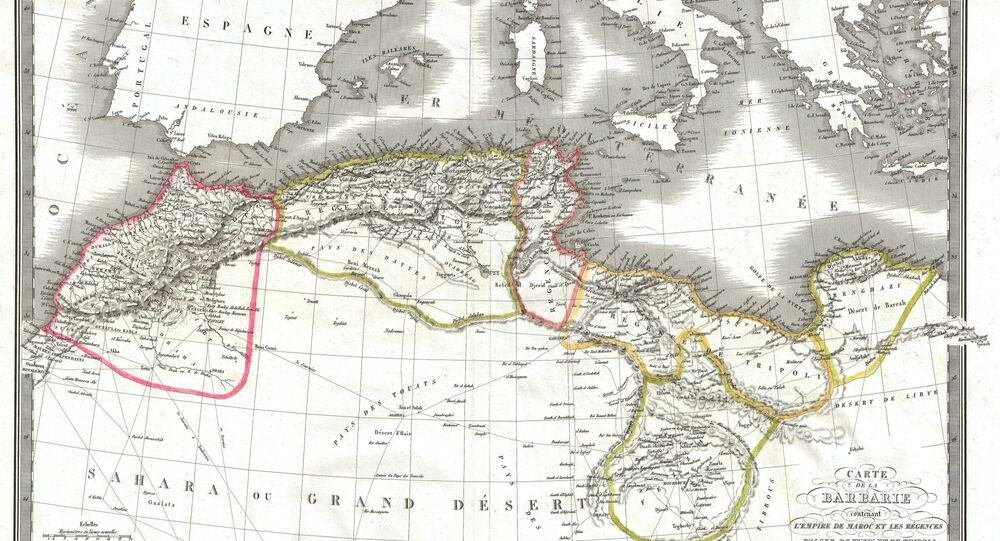 Tens of thousands of refugees continue to risk their lives crossing the Mediterranean from Libya to Europe. Meanwhile, a Trump advisor has proposed breaking the country up into several new states. Commenting on the chaos that continues to engulf the North African state, Radio Sputnik contributor Ilya Kharlamov warns that the worst is still to come.

Last week, the International Organization for Migration reported that nearly 32,000 refugees and migrants have crossed the Mediterranean Sea to reach European states since the beginning of this year, over 80% of them going to Italy. Over 550 people died trying to make the treacherous crossing.

Libya has been mired in chaos and civil war since 2011, when a NATO-led bombing campaign led to the overthrow and murder of Colonel Muammar Gaddafi. Since then, the country has become a haven for people smugglers and slave traders, becoming one of the main routes by which people from across Africa and the Middle East make an attempt to reach Europe, which has been mired by a migrant crisis since 2015.

Earlier this month, White House deputy assistant to President Donald Trump Sebastian Gorka was reported to have proposed to the president that Libya be partitioned into three new states: Cyrenaica in the east, Tripolitania in the northwest and Fezzan in the southwest. Prior to the Italian invasion of 1911, these were the administrative divisions of Libya in the Ottoman Empire, which collapsed in the 1920s.

In a searing op-ed on the implications of Gorka's proposal, and the desperate situation now facing Libya, journalist and Radio Sputnik contributor Ilya Kharlamov wrote that the results of Western powers' 'experiment' in Libya is quickly coming around to hit them like a boomerang. For Europe, he warned, the worst may still be yet to come.

"Torn apart by conflict, Libya is once again at the center of attention of Washington strategists, or more precisely, those of them who are considering a new division of the country into three parts, Tripolitania, Fezzan and Cyrenaica," Kharlamov wrote. "This, for example, is the view held by deputy assistant to the president Sebastian Gorka." Effectively, the journalist lamented, "it seems that the period of the reign of Colonel Gaddafi, under which Libya was turned into an economically and socially developed state, should be completely forgotten."

"Today, the country resembles a territory from the medieval era, where the slave trade, terrorism, and criminal gangs thrive. Then there are the refugees, endlessly flowing to Europe in search of a better life. Too often, they find death before ever reaching the continent. In the country, there are now three governments, plus retired army general Khalifa Haftar, who controls part of the territory in the east. And there are no agreements between these forces. On the contrary, contradictions between them are only gaining momentum."

© REUTERS / Ismail Zitouny
Fighters of Libyan forces allied with the U.N.-backed government gather at the eastern frontline of fighting with Islamic State militants, in Sirte, Libya

Unfortunately, Kharlamov noted, even amid such musings by great powers over whether or not to formally liquidate the Libyan state, "no one in Washington seems concerned over offering compensation, or any real, large-scale assistance to the country. The idea is to 'take and divide', to recall the words of the hero of a Bulgakov novel."

© AP Photo / Mohammed el-Shaiky, File
Libyan Future: West Apparently 'Has No Idea What to Do With It After Gaddafi'
Ultimately, the journalist suggested that "perhaps Trump's team simply hasn't gotten to Libya, or to any serious reflection on the country's future fate. At least Barack Obama once admitted his mistake on Libya, even if slyly. The former president claimed that it was necessary to overthrow the regime to 'protect civilians', but that there was no plan of action on what to do after that. So the country 'slid' into a large-scale civil war, Obama said."

Unfortunately, Kharlamov noted that not everyone can just get up and walk away from the toxic Libyan quagmire, apology or no apology. "The US is very far from Libya. Europe is a lot closer – just a stone's throw across the Mediterranean. What happens on the ruins of Gaddafi's Jamahiriya should be of prime interest to the Europeans, especially since their fates are closely related."

© AP Photo / Matthias Schrader
German Navy sailors surround a boat with more than 100 migrants near the German combat supply ship 'Frankfurt am Main' during EUNAVFOR Med, also known as Operation Sophia, in the Mediterranean Sea off the coast of Libya, Tuesday, March 29, 2016
© AP Photo / Mohamed Ben Khalifa
IOM Reveals Slave Markets Operate in Southwestern Libya
The journalist recalled that in the 20th century, Libya had been a colony, first of the Italians, then of the French and British, who administered it following Italy's defeat in World War II. After that, the country gained formal independence (in 1951) and genuine independence (in 1969), when Gaddafi and his fellow officers overthrew the monarchy.

"Today, a kind of historic boomerang is returning to Europe, in the form of illegal migrants, drug traffic and other 'delights' of Western-style democracy, imposed from the outside onto the Middle East and North Africa," Kharlamov wrote. "This boomerang is painfully hitting the heads and other parts of the European 'body.'"

© AFP 2021 / Vasily MAXIMOV
Keep Calm & Follow Moscow's Lead: UK Setting Up Ties With Libya's Tobruk Gov't
"Under these circumstances, the continent would do well to consider its own fate, without looking back to see what Washington wants." Europe, the journalist argued, should "facilitate the return in Libya of a secular regime. Even if it is authoritarian, it would still be better than the alternative – chaos." And this is possible, "since there is already a general in mind."

"There is only one problem: political will; the Europeans have lost it, and it's now hiding under the sofa in the dustiest corner," the analyst concluded.