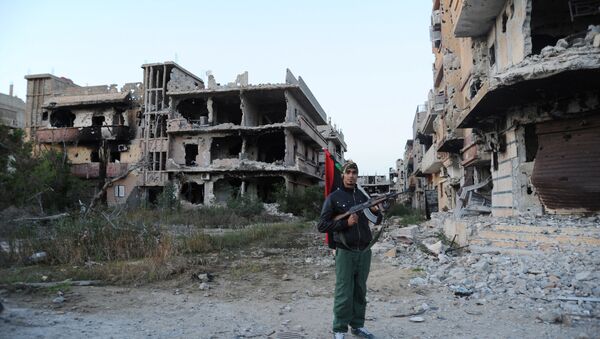 © AP Photo / Mohammed el-Shaiky, File
Subscribe
International
India
Africa
Commenting on the recent report in The Guardian that senior White House foreign policy official Sebastian Gorka has pushed for a plan to partition Libya into three areas, Libyan expert on regional issues Abu Bakr al Ansari suggested that the West "has no idea what to do with the country after the murder of Muammar Gaddafi."

Africa
Kremlin Could Play Power Broker in Libya as Civil War Dust Settles
The Guardian has recently revealed that senior White House foreign policy official, deputy assistant to President Trump Sebastian Gorka "has pushed a plan to partition Libya, and once drew a picture of how the country could be divided into three areas on a napkin in a meeting with a senior European diplomat."

"The map he drew on a napkin during the transition period cut Libya into three sections, apparently based on the old Ottoman provinces of Cyrenaica in the east, Tripolitania in the north-west and Fezzan in the south-west," the outlet elaborated.

Commenting on the report, Libyan expert on regional issues Abu Bakr al Ansari told Sputnik that it is aimed at "probing the possible reactions to the suggestion within the country, in the region and within the international community."

"The West does not know what to do with Libya after the murder of Muammar Gaddafi. The neighboring countries are using the situation to intimidate their own population by threatening a repetition of the Libyan scenario. Meanwhile the Libyans are living under the constant threat of interference in their internal affairs and the instigation of various revolutions," he told Sputnik.

Africa
Divide and Conquer: Trump's Deputy Aide Proposes to Split Libya Into Three Parts
In case this plan comes into force, the expert said, it will lead to a redrawing of the map across many of the region's countries.

"For example, Algeria and Chad could lay claims to Fezzan region in the south of Libya. However Tunisia, Sudan and Egypt will make challenges for other areas of the country. Hence the partition of Libya will bring a lot more problems than it could possibly solve. Besides, it won't satisfy either the Libyans or the populations of the neighboring countries as it will bring the risk of a new calamity to the region," he said.

Libya has been mired in a conflict between two competing governments since the murder of Muammar Gaddafi in 2011 as the result of the NATO-led intervention.

The UN-backed Libyan Government of National Accord (GNA) is based in Tripoli and is led by Fayez al-Sarraj.

It is rivaled by the Tobruk-based House of Representatives parliament, headed by Aguila Saleh Issa.