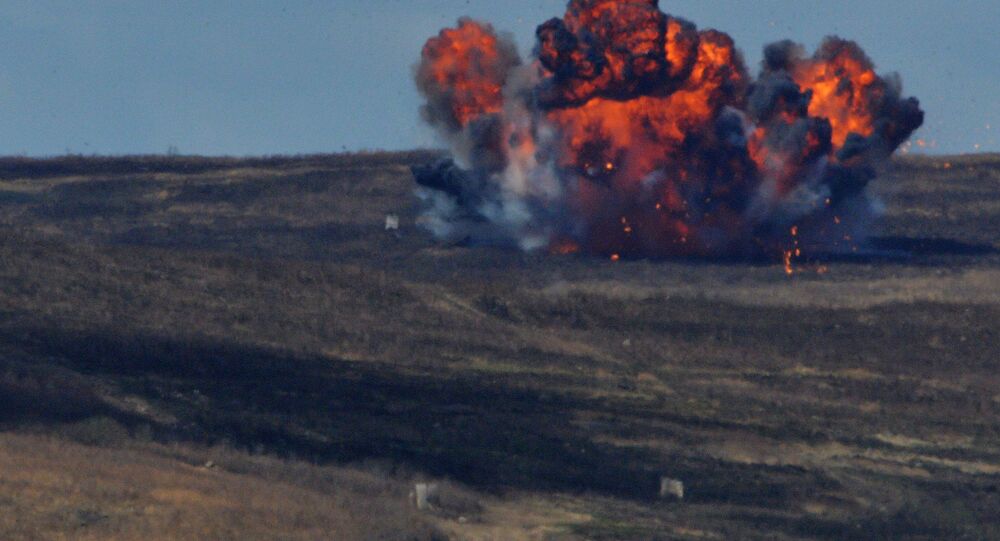 While the GBU-43/B Massive Ordnance Air Blast Bomb (MOAB) – the "Mother of All Bombs" – is believed to be the US' largest non-nuclear bomb, Russia's Aviation Thermobaric Bomb of Increased Power (ATBIP), nicknamed the "Father of All Bombs," outpaces the US munition in terms of its destructive power and the blast radius.

According to observers, the 22,000-pound munition — the GBU-43/B Massive Ordnance Air Blast Bomb — also referred to as the "Mother of All Bombs" (MOAB), has sent a strong message to the world.

"Why did America just drop the mother of all bombs?…  [The fact] that the [Trump] administration chose to speak publicly and plainly about the use of this weapon was clearly intended to send a message: Playtime is over," James Jay Carafano, the Heritage Foundation's vice president for foreign and defense policy studies, wrote for the Daily Signal.

© REUTERS / US Department of Defense
Who's Next: US Drops 'Mother of All Bombs' in Afghanistan Amid Rising Tensions With N Korea
Speaking to Sputnik on Thursday, Richard Weitz, Senior Fellow and Director of the Center for Political-Military Analysis at Hudson Institute, suggested that the show of force used was meant to demonstrate US military capabilities to Daesh and to North Korea.

However, Russian Senator Franz Klintsevich believes that the use of the MOAB in Afghanistan as well as the recent Tomahawk missile strike against Syria were signals to Russia.

"The use of a super-powerful non-nuclear bomb in Afghanistan, in my opinion, should be viewed in the context of the military-political strategy that the US has adopted after Donald Trump has taken office in the White House," Klintsevich told RIA Novosti.

"I think that this move falls within the same trend as the [previous] missile strike against Syria. In fact, in both cases, it is the show of force issue, and these so-called 'messages' are intended for the only addressee — Russia," the Russian Senator stressed.

But is the "language of force" appropriate toward Russia?

Klintsevich stressed that if Washington believes that it will manage to persuade Russia to change its policy using such "messages," it is "deeply mistaken."

Indeed, it seems that the recent blast of the GBU-43/B by the Pentagon has left Moscow unimpressed, and with good reason.

Russia has its own non-nuclear munition that dramatically exceeds the American "Mother of All Bombs" both in terms of the destructive power and the blast radius.

"Russia's Aviation Thermobaric Bomb of Increased Power [ATBIP]-though physically smaller than the GBU-43/B-has a much larger explosive yield," Dave Majumdar of the National Interest reported, "Based around thermobaric explosives, the ATBIP — sometimes called the 'Father of All Bombs' [FOAB] — has the destructive power equivalent to roughly 88,000lbs of TNT."

YouTube/JustInfortheTruth
US Decision to Drop MOAB Bomb in Afghanistan Unlikely to Improve Political Situation - NGO
Russian online newspaper Rossiyskaya Gazeta specifies that in contrast to the GBU-43, conventional ordnance filled with large number of explosives, the Russian bomb is a thermobaric weapon with the destructive power four times that of the MOAB.

"When the ATBIP is dropped on the target, a cloud of explosive dust is being formed, filling all the shelters. The dust explodes simultaneously destroying infrastructure and equipment and burning to ashes everything within the radius of 300 meters," the media outlet wrote.

For comparison's sake the blast radius of the GBU-43 is 140 meters.

Russia's "Father of All Bombs" was successfully field-tested in 2011, after being dropped by the Tupolev Tu-160 strategic bomber.

"The results of the tests of the aviation munition showed that it is comparable to a nuclear weapon in terms of efficiency and capabilities," Deputy Chief of the Russian General Staff Alexander Rukshin reported as cited by Rossiyskaya Gazeta, "At the same time, I want to emphasize that the explosion of this munition absolutely does not pollute the environment."

"Americans need to stop," Klintsevich believes, stressing that the use of force may lead "to unpredictable consequences."

US Hit Afghanistan With Giant Bomb to Show Off Military Might, Including to DPRK