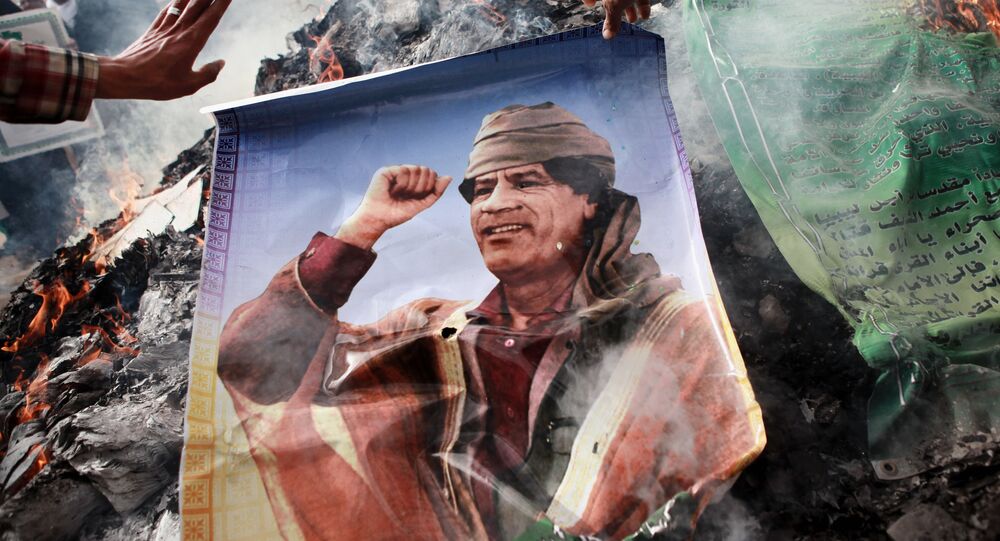 Last week marked the sixth anniversary of the start of the civil unrest referred to in Western countries as the 'Libyan Revolution', which culminated in the murder of Muammar Gaddafi and the destruction of Libyan statehood. Speaking to RIA Novosti, Gaddafi's cousin Ahmed Gaddaf al-Dam discussed the situation in Libya, and who was responsible.

Libya's descent into chaos began on February 17, 2011, when protests in the city of Benghazi escalated to a widespread rebellion, concentrated mostly in the eastern portion of the country. In March 2011, as government forces rallied and prepared to crush the revolt, French, British, US, Canadian and Italian forces and allies from Jordan, Qatar, the UAE and Sweden implemented a no-fly zone over Libyan airspace, and launched air strikes against Libyan Army forces.

© REUTERS / Ismail Zitouny
'Situation Volatile, Could Worsen': EU Ignores Cause of Libya Lawlessness
The NATO operation ended in October 2011 following the capture, torture and execution of longtime Libyan leader Muammar Gaddafi; the country has since descended into a state of chaos, leaving tens of thousands dead and millions displaced, with several factions, including Daesh and other terrorist groups, vying for control over pieces of the country.

Speaking to RIA Novosti about the condition Libya is in today, Ahmed Gaddaf al-Dam, Gaddafi's cousin and a former aide to the Libyan leader, said that he is convinced that the NATO mission to destroy his country has not yet been completed.

© AFP 2021 / PATRICK BAZ
A Libyan rebel flashes a V-sign in front of burning tank belonging to loyalist forces bombed by coalition air force in the town of Ajdabiya on March 26, 2011

The alliance, he recalled, had intervened in the country as a united front, but then began supporting disparate armed groups which opposed one another all across the country. All the while, "NATO itself was never divided, and sought only to manage the conflict. They did not want it to end. It became clear that the West's plan, which started off with coming to kill Gaddafi and to destroy Libya, has yet to be fully implemented. The West continues to nurture [various] groups to ensure that the conflict does not end for as long as possible."

© AP Photo / Petros Giannakouris
Over 380,000 Illegal Migrants Came to Europe in 2016 - Frontex
Not long before his death, Gaddafi warned Western powers that Libya would disintegrate if he was removed from power. Six years on, his predictions have turned into a grim reality, Gaddaf al-Dam noted.

"If the problem lay in the need for Gaddafi or Saddam Hussein to give up power, as some have claimed, then why is all this senseless destruction and killing still going on [now that they are gone]? In this war, fueled by pro-Western forces, there are no winners."

As for Gaddafi's predictions, Gaddaf al-Dam pointed out that the Libyan leader "was a historian and a revolutionary, with his own life experience. He had information about the threats to the Middle East. He warned about it back in the 1980s –all of this is documented. And now, unfortunately, it's clear that he has successfully predicted exactly what has come to pass in the Middle East."

Responsibility for the current chaos in Libya lies squarely on the shoulders of the Security Council, which approved the no-fly zone, and NATO, which implemented it, Gaddaf al-Dam said.

They shoulder the responsibility "for the violations which were committed in Libya – for the tremendous destruction of the country's infrastructure, for the deaths, for the displacement of a third of the country's population, for the prisons, where tens of thousands languish, for the wounded, for the stolen billions, the stolen antiquities, gold, uranium, but most importantly – for the humiliation of the dignity of Libyans, who are living as beggars across the planet."

© Sputnik / Sergey Guneev
As Relevant as Ever: Why Trump Needs to Take Putin's 2007 Munich Speech to Heart
Gaddaf al-Dam recalled that in 2011, the Libyan state had approximately $600 billion worth of assets inside and outside the country, including $200 billion in bank accounts abroad, along with tons of gold and silver. Six years on, all of this has been plundered. "During these six years, not a single brick has been laid. The streets of the capital have no electricity, the water supply has been turned off, wages are not paid." Schools are not functioning. "This all a time bomb, and poses a threat to the future."

Obama, Gaddaf al-Dam recalled, has acknowledged his mistake. So too did the UK's Foreign Affairs Committee of the House of Commons, and former Italian Prime Minister Silvio Berlusconi. Now, he said, "Libyans demand an apology. Those who make mistakes must fix them."

"First, the international community must apologize for the things they have done to Libyans, and then begin to correct the mistakes. Then we will extend our hands to one another to rebuild our homeland, and return our sons."

© REUTERS / Hani Amara
Libyan Rival Parties Agree to Hold Parliamentary, Presidential Vote in 2018 - Egyptian Army
The current US and EU-supported Libyan government, which supported the February 2011 'revolution', and who present themselves as the representatives of the entire Libyan people, must give up, must leave, Gaddaf al-Dam insisted. "And we will build a new Libyan government for all Libyans, without exceptions – under a new flag, which unites everyone, or just under the white flag of peace. It is crucial to create an impartial and neutral government, not the cabinet of supporters of the events of February 2011, as is happening now."

"It is necessary to revive the army, about 70,000 of whom are now living in Tunisia and Egypt, as well as the police and the judicial system," he noted. "The internally displaced persons must return home, and prisoners should be released. We need a general amnesty, and free elections under the auspices of the international community. All of this can be solved; we have the necessary knowledge and traditions."

Just as importantly, Gaddaf al-Dam stressed, "all of this can be done without external political and military intervention, which only exacerbates confrontation."

© AP Photo / Manu Brabo
Deployment of National Guard in Tripoli Might Destabilize Situation - State Dept
Asked whether he, as a politician, and the supporters of the old Gaddafi government could find support in Libya today, Gaddaf al-Dam said that the answer was 'yes'. "This is our country. Besides, we are not the ruling political party which collapsed, as happened in in Tunisia or Egypt. We are the social, political and military foundation of the Libyan state."

For now though, he added, "we are looking at the situation from the outside, because we do not want to be implicated in this catastrophe. We do not want to be puppets, implementing the plans of the imperialists, who want to turn Libya into a dumping ground for its waste, to appropriate our wealth and build their military bases here. We want peace for Libya – we want to heal the wounds of Libyans."

"No one can participate in the construction of a state if he does not take part in dialogue and the search for solutions," Gaddaf al-Dam noted. "We are an important component when it comes to the Libyan settlement. It's not possible to continue to ignore over 60% of Libyans. These people simply have not yet taken up arms, even though they were the real army, the police, the real political leaders, the lawyers and representatives of tribes who refused to betray themselves," he concluded.