The recapture of Mosul from Daesh (ISIS/ISIL) has become a matter of honor for Pentagon generals following the Russo-Syrian coalition's success in Aleppo. However, despite the optimistic prognoses of the US Secretary of Defense, the liberation of Mosul is likely to drag on for months, retired Colonel Mikhail Khodarenok writes for Gazeta.ru.

It appears that during the next phase of the Mosul offensive, the US-led  coalition would not only seek to deal a heavy blow to Daesh (ISIS/ISIL) in Iraq but also to restore the reputation of the Pentagon's generals following Russia's success in Aleppo, Gazeta.ru's military expert, retired Colonel Mikhail Khodarenok believes.

"Three months ago, when the operation to liberate Mosul from Daesh terrorists began, the outgoing US Secretary of Defense Ashton Carter said that it could be complete before 2017 begins. However, this has not happened yet and there is still a long way to go before the terrorists are defeated," Khodarenok noted in his recent op-ed. 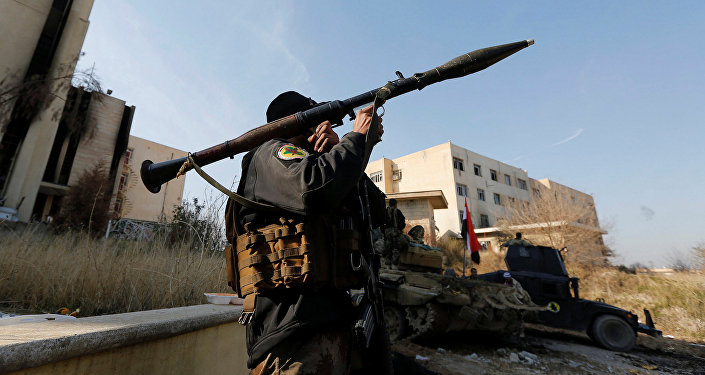 © REUTERS / Ahmed Saad
Iraqi Forces Liberate Campus of University of Mosul From Daesh Terrorists
However, this fact has not prevented Carter from giving reporters yet another prognosis: during a January press briefing, the US Secretary of Defense assumed that Mosul could be recaptured from terrorists before Barack Obama leaves office.

According to the retired colonel, the liberation of Mosul is meant to become the US' response to the success of the Syrian Arab Army (SAA) and Russian military forces in the Syrian city of Aleppo.

"The coalition's major efforts are now focused on the liberation of the eastern part of [Mosul], blocking Daesh's communications from the south and north-west, undermining the terrorist group's command system and reducing their combat capabilities through massive air strikes," the retired general noted.

The US Department of Defense reported Thursday that the Iraqi Counter-Terrorism Service (ICTS) has already retaken 70 to 80 percent of eastern Mosul.

According to Rudaw, on Friday the Iraqi forces managed to liberate two more eastern Mosul districts, Faisaliyah and Nasr, on the eastern edge of the Tigris.

Citing Iraqi Joint Command, the media outlet added that the 15th and 16th divisions of the Iraqi Army have also liberated the northern parts of the Hadbaa and Mudaraa districts in northern Mosul.

As of yet, terrorists have managed to resist the offensive, although the US-led coalition forces have provided considerable air and artillery support to Iraq's army.

© AP Photo / Militant video, File
Daesh Leader Baghdadi Sleeping in Suicide Vest - US Coalition
Furthermore, despite the fact that the total number of the coalition soldiers is three times that of the jihadists, the street fight in Mosul could drag on for months, especially in the western parts of the city, the military expert warned.

"I had a good chuckle when I heard Ash Carter say last week that ISIS' 'days are numbered'. In fact, its months are numbered. This whole idea that the battle will be over by the time that Trump is inaugurated is a fantasy. This is going to go on for a long time," a senior Centcom officer told Mark Perry of Politico.com in mid-December.

© AP Photo / Hadi Mizban
Iraqi Army soldiers celebrate as they hold a flag of the Islamic State group they captured during a military operation to regain control of a village outside Mosul, Iraq (File) 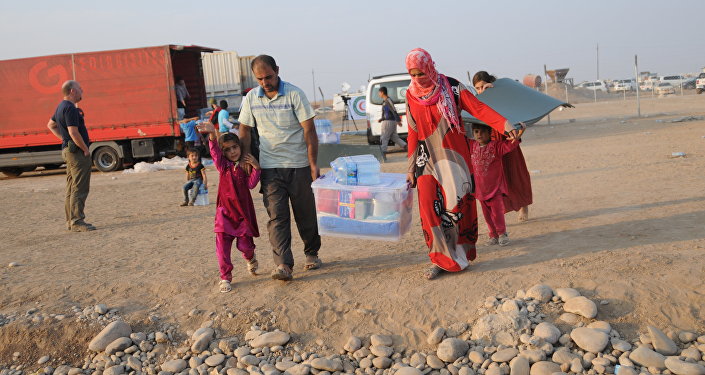 © Sputnik / HİKMET DURGUN
Over 144,500 Iraqis Displaced Amid Operation to Liberate Mosul From Daesh
Meanwhile, the Iraqi Armed Forces, including the elite "Golden Division," has suffered significant losses on the battle field. It is regarded as the most capable fighting force of the Iraq Army. Citing his source in the Pentagon, Perry emphasized that the battle for Mosul has been so intense that the Golden Division's veteran battalions have lost up to 50 percent of their fighters.

"If that rate stays constant, the division could become combat ineffective in a little over a month, and perhaps even sooner," the Centcom officer noted as cited by the journalist.

It appears that the terrorist group is well aware of the actual operational capabilities of the coalition forces, Khodarenok suggested. Apparently therefore, Daesh commanders have "easily" ceded the south-eastern part of Mosul and dispatched their forces to Palmyra, Deir ez-Zor and al-Bab in Syria, he noted.

To complicate matters further, the Mosul offensive has pushed Iraq to the brink of a humanitarian catastrophe, the military expert noted.

Moreover, between January 5 and 12, some 12,354 Iraqis have been forced to more, the UN official website says.

Hostilities in West of Iraq's Mosul Could Lead to Humanitarian Catastrophe