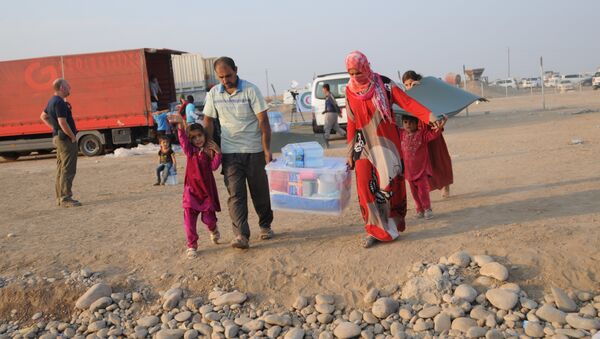 12,354 people have been displaced in the past week alone from their homes in Mosul, according to the UN International Organization for Migration (IOM).

MOSCOW (Sputnik) — Almost 144,600 Iraqis have fled from their homes in Mosul as a result of the ongoing military operation to retake the city from the Islamic State (ISIL or Daesh), the UN International Organization for Migration (IOM) revealed Friday.

According to IOM’s Emergency Tracking (DTM), 12,354 people have been displaced in the past week alone, the press release stated. The DTM further estimated that a total of 24,102 families remain displaced.

US-Led Coalition Launches Five Airstrikes Against Daesh in Mosul
Over 126,000 displaced persons are currently in camps and emergency sites operated by the government, IOM, and other UN agencies. The rest reside in host communities, and private or public buildings, the migration agency added.

The operation to liberate Mosul from IS terrorists, outlawed in many countries, including Russia, began on October 17, 2016. Iraqi troops have managed to advance in the eastern part of the city, but the western part — on the right bank of the Tigris River — remains under militant control.

The offensive is led by Kurdish Peshmerga fighters and Iraqi soldiers backed by the US-led anti-terror coalition.