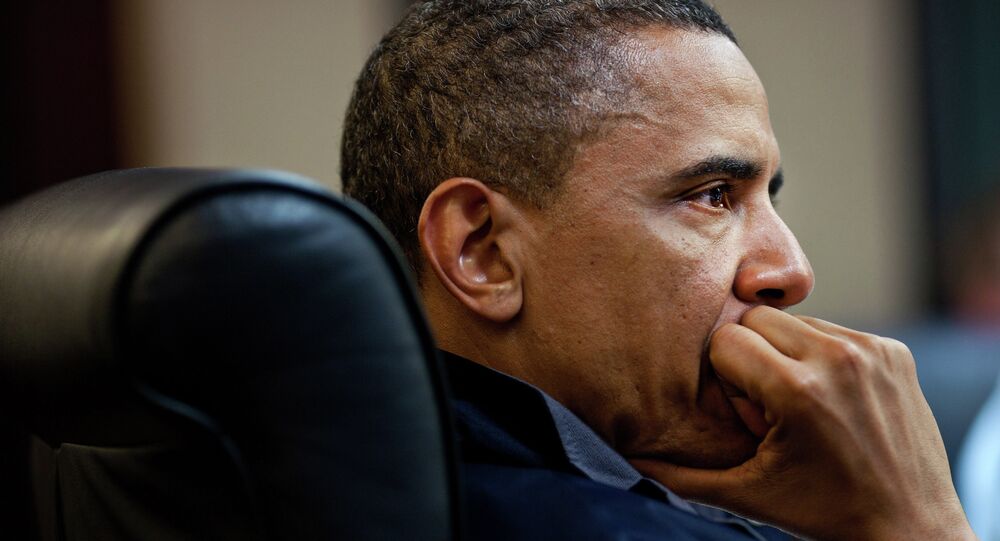 #WorstPresidentEver: US Twitter Users Deliver Their Verdict Upon Obama's Rule

Assessing Barack Obama's legacy some US Twitter users labeled the outgoing politician "the worst president ever" and denounced his attempts to deepen the rift between the United States and Russia.

© Photo : The White House
Last-Ditch Efforts: Obama's Anti-Russian Sanctions 'Will Come Off Like Dust'
The outgoing US President Barack Obama has taken a last-ditch effort to damage America's relations with Moscow by introducing anti-Russian sanctions over what the US mainstream media called "vote hacking."

Still it appears that the new sanctions are primarily directed against the Trump administration rather than the Russian government, as Vyacheslav Smirnov, director of the Scientific and Research Institute of Political Sociology remarked in his interview with Radio Sputnik.

Since the beginning of the last week the White House has expanded sanctions against Russia and adopted a series of laws apparently aimed at creating as many problems for Obama's successor as possible.

Obama's snap decisions have prompted a wave of criticism from US Twitter users, who jumped at the opportunity to point the finger at the president's embarrassing blunders, labeling him "the worst president ever."

Saw this morning that Obama trying to pass last minute laws to screw Trump up. #WorstPresidentEver

This #worstpresidentever #obama is determined to $crew us right up until his last day on office.
I hope that #voters have learned from this!

​Some users see Obama's so-called "retaliatory measures" against Moscow as nothing less than an attempt to start conflict with Russia.

​Others call attention to the fact that the Obama administration failed to present any evidence proving Moscow had a hand in the "vote hacking."

Obama issued sanctions on Russia in response to alleged hacking of election which there is no evidence of whatsoever. This is ridiculous. pic.twitter.com/q8zMwnRiv8

​They drew attention Obama's remark that no one could rig America's elections made during his October press conference with the Italian Prime Minister.

Obama: "We cannot have Russia rigging our elections. Only the DNC are allowed to do that."
Why no sanctions against the DNC?#FridayFeeling pic.twitter.com/LJi2SDse24

​"There is no serious person out there who would suggest that you could even rig America's elections, in part because they are so decentralized. There is no evidence that that has happened in the past, or that there are instances that that could happen this time," the US President said.

For its part WikiLeaks highlighted that the "hacking report" released Thursday didn't mention that it was WikiLeaks who leaked and published a collection of Democratic National Committee (DNC) emails and pinned the blame on Moscow.

​However, according to Twitter user Steph, Obama's moves are more about "punishing Americans for rejecting him & Hillary."

Obama's last minute aggressive behavior towards other nations is about punishing Americans for rejecting him & Hillary. Nothing more.

​Contrary to all expectations, Russian President Putin refrained from slapping reciprocal sanctions on American government officials, prompting analysts to admit that the Russian leader has once again "outmaneuvered" the White House.

​Meanwhile, the UK Russian Embassy tweet over Obama's latest move has stolen the show in the mainstream media.

President Obama expels 35 🇷🇺 diplomats in Cold War deja vu. As everybody, incl 🇺🇸 people, will be glad to see the last of this hapless Adm. pic.twitter.com/mleqA16H8D

"The Russian response to Barack Obama's announcement that he was expelling 35 diplomats over the alleged cyber-attack on the US election, was fast, and in some cases, rather amusing," The Independent remarked commenting on the matter.

According to Russian Foreign Ministry spokesperson Maria Zakharova, this time America was "slapped in the face" by its own government.

"Now, the whole world can see what a crushing blow President Barack Obama and his unskilled team delivered to Washington's reputation and leadership," Zakharova wrote on Facebook.

However, she believes that Washington and Moscow stand a good chance of resolving the deadlock in relations.

"It is necessary to resolve the deadlock in the US-Russian relations, which occurred due to the previous US administration, and there are all prerequisites for this," Zakharova told Sputnik Saturday.

"We, as the Foreign Ministry, can work with a team which represents the authority, meaning it has been approved. So we are waiting for the new administration to arrive at the White House, and then we will be ready to work with them," she stressed.