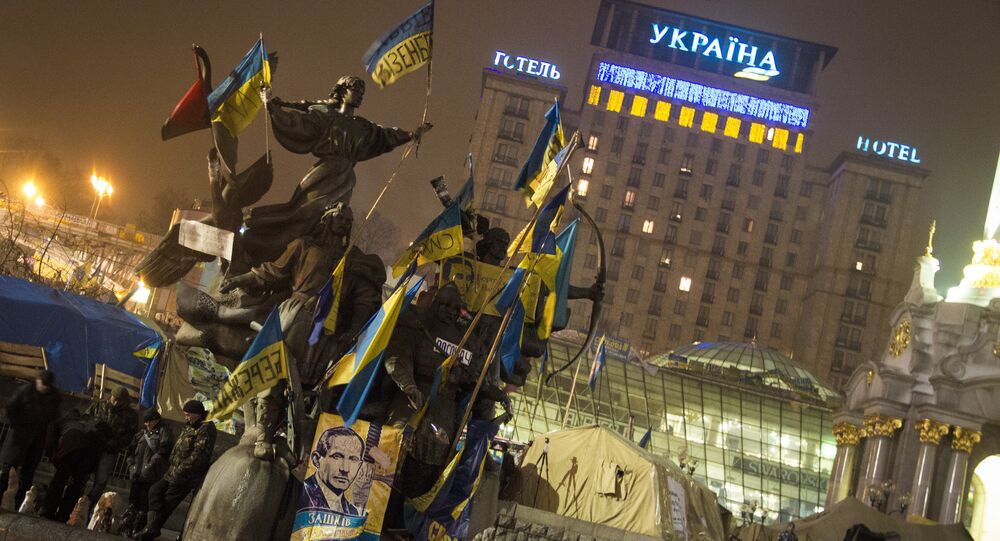 Following Ukraine's exodus of technocratic leaders, President Petro Poroshenko's power grab has marked the "abandonment of the principles of the Revolution of Dignity," British businessman Mohammad Zahoor writes, hinting at the possibility of a third Maidan Revolution.

Trouble is brewing in Ukraine following a string of resignations of "able reformist technocrats," such as Natalie Jaresko, Aivarus Abromavicius and Arseniy Yatsenyuk, Ukraine-based British businessman of Pakistani origin Mohammad Zahoor writes in his article for New Statesman.

"The international reformist technocrats who joined the government in December 2014 have all gone… This was not a coup d'etat, just a political shake-up, the end of a political coalition, the price for jump-starting the Ukrainian reform-process again, or so it was claimed. But what was the price for this re-boot? Nothing more than the abandonment of the principles of the Revolution of Dignity," Zahoor stresses.

© AFP 2021 / SERGEI SUPINSKY
Freedom? How West's Financial Aid Made Things Even Worse for Ukraine
Zahoor, the Chairman of ISTIL Group and publisher of Kyiv Post, bemoans the fact that "able, technocratic" leaders who have strong ties with the West have been replaced by "a less reformist, less competent cabinet" that comprises "Poroshenko loyalists, almost none of which speak any Western languages."

According to the businessman, Western analysts are expressing doubts over Volodomyr Groysman's appointment as the new Ukrainian prime minister. But much of this suspicion is not linked to Groysman, the former mayor of western Ukrainian city of Vinnytsia, but to the Ukrainian president.

"The current developments are very much the result of President Poroshenko's power grab, a political maneuver that began with the appointment of the ineffective General Prosecutor Shokin," Zahoor notes, adding that there has also been a return of the oligarchs, most notably Ihor Kolomoisky, to the Ukrainian politics.

Indeed, Kolomoisky, the Ukrainian tycoon and one of the main sponsors of the February 2014 coup d'état, still remains Poroshenko's ally with his Renaissance Party in the Ukrainian Parliament.

© REUTERS / Valentyn Ogirenko/Files
Doh! 'Maidan Godfather' Gets His Assets Frozen by London Court
Much in the same vein independent journalist David Stern wrote in his Op-Ed for Politico Europe in mid-April 2016.

"Ukraine got a new government Thursday, but the debilitating political crisis is likely only taking a short breather before the next round of confusion… The biggest absence is Natalie Jaresko, the American-born former finance minister, who had enormous credibility with the International Monetary Fund [IMF] and Western lenders crucial in supplying the financing to keep Ukraine's battered economy afloat," the journalist underscored.

He stressed that Groysman's new team has only a "few internationally known reformers," adding that the new government coalition in the Parliament is "a highly fragile creation."

But the question on everyone's lips is whether or not Groysman will be capable of carrying out highly unpopular radical economic reforms in Ukraine as well as of cracking down against corrupt Ukrainian oligarchs, let alone meeting the conditions of the Minsk agreement.

© Sputnik / Stringer
Ukraine's Trump Card? Why Kiev Should Stop Playing Games With Russia
Anyway, Kiev needs to act fast on the reforms in the wake of the resignation of key Western-backed technocrats, Reuters writes citing a top official from the European Bank for Reconstruction and Development (EBDR).

On May 10, an International Monetary Fund (IMF) team arrived in Kiev to take a look at the ongoing developments and make a crucial decision whether or not to release new tranches of Western aid to Ukraine.

Back in March 2015, the IMF approved a $17.5 billion loan program for Ukraine. As of yet the Fund has poured only $6.7 billion into the Ukrainian economy and taken a pause frustrated by Kiev's failure to take necessary political and economic measures.

However, according to Zahoor, "the hope that the current coalition will be able to reinvigorate the reform process is nothing if not naive, and it is no surprise that the Western governments can barely hide their skepticism."

Zahoor believes that it is highly unlikely that Arseniy Yatsenyuk will leave politics: he is still a faction leader of the influential People's Front with 81 votes of the current coalition.

Should the Poroshenko and Groysman government fail to deliver on their promises to the Ukrainian people, a third Maidan Revolution may erupt against the present leadership, the businessman predicts.

Lack of Kiev's Political Will Hinders Settlement of Conflict in Ukraine