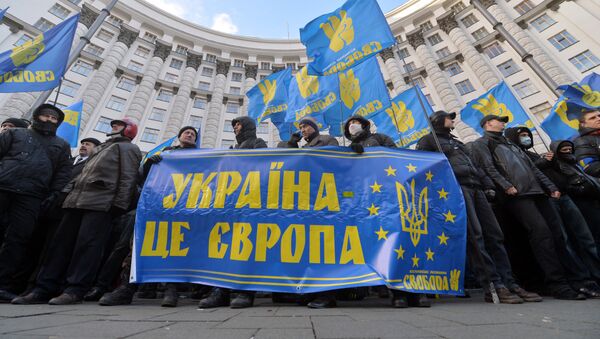 Since the fall of the USSR Western donors have poured billions of dollars into Ukraine; however, the country's corrupt elite is siphoning off the money to its own pockets instead of building a functioning state, Western experts stress. It seems as though the Western aid to Ukraine is only making things worse.

Disgraced Ukrainian Ex-PM Who Disappeared After Ouster Appears at Easter
Virtually unlimited access to Western assistance has 'freed' the Ukrainian political establishment from carrying out serious economic and political reforms in the country and only heightened its interest in maintaining the status quo, American scholars, political risk consultant Neil A. Abrams and Professor M. Steven Fish of the University of California at Berkeley noted.

Over the past 25 years the West has funneled billions of dollars in post-communist Ukraine in order to transform it into "a law governed state" and a "competitive market economy"; however, again and again the West's initiatives have been crashing on the rocks of corruption and asset-grabbing in Ukraine.

"Only in rare instances have reforms gone beyond artful pandering to Western donors. The reason is simple: Since 1991, when Ukraine gained independence from the Soviet Union, a powerful political and business establishment has wielded uninterrupted control of the Ukrainian state. Not even popular uprisings in 2004 and 2014 or changes of executive power in 1994, 2005, 2010 and 2014 managed to dislodge this elite," Abrams and Fish wrote in their article for the Washington Post.

Abrams and Fish called attention to the fact that the International Monetary Fund's loan tranches for Ukraine have been repeatedly siphoned off to pockets or "untouchable offshore accounts" of the country's oligarchs and top level government officials — both in 1999 and 2015.

"For every dollar of aid that flows into the country, $6.25 illicitly flows out, according to figures from the OECD and Global Financial Integrity," the scholars emphasized.

'No More Cookies': Washington Presses Kiev on Donbass Elections
They bemoaned the fact that the EuroMaidan has not changed the trend, and privatization of state-owned assets is no solution since they would most likely be sold for nothing to Ukraine's "government cronies."

Now the Western community has found itself on the horns of a dilemma: whether or not to continue to provide considerable financial assistance to Ukraine: the IMF is currently weighing the pros and cons of its $17.5 billion lending program.

The scholars asked whether the West should refrain from resuming its financial assistance to Kiev "until the coming to power of a truly new leadership."

Josh Cohen, a former US State Department project officer who worked on managing economic reform projects in the former Soviet Union, echoes the scholar's stance in his article "No reforms, no aid for Ukraine" for the European Council on Foreign Relation's recent Wider Europe Forum.

According to Cohen, it is hardly surprising that Petro Poroshenko's government has not succeeded in conducting reforms and fighting corruption.

"While Poroshenko's behavior is disappointing, it is not surprising — in many ways, putting an oligarch in charge of a country that desperately requires deoligarchization is akin to appointing an arsonist to head the local fire department," the former US State Department officer underscored.

Ukraine's Trump Card? Why Kiev Should Stop Playing Games With Russia
Cohen insists that it is time for the West to tell the Ukrainian leadership that enough is enough: the IMF should freeze its aid until Kiev meets the West's conditions.

For instance, the West should pressure Kiev into reforming its "hopelessly corrupt" Prosecutor Generals' Office (PGO) and appointing "truly independent reformers" to carry out necessary changes. The Ukrainian government should also create "a brand new Supreme Court with professional and responsible judges," Cohen noted, adding that that would require amending the country's Constitution.

"Some might argue that imposing detailed conditions for aid would undermine Ukraine's sovereignty," Cohen remarked, and added: "But in fact, imposing conditions is exactly what reformers want the West to do."

So who are those "professional and responsible judges," "truly independent reformers" and "truly new leadership"?

Interestingly enough, in his February article for Foreign Policy, entitled "Why Ukraine Must Outsource Its Fight Against Corruption" Cohen was much more frank.

According to the former US State Department official, Ukraine should "sacrifice a portion of its sovereignty" although it "would surely be a difficult pill for Kiev to swallow."

Josh Cohen noted that the most useful model for Ukraine is… Guatemala, a small and distant Central American country.

"Faced with its own endemic graft, Guatemala decided to sacrifice a portion of its sovereignty, outsourcing its fight against corruption to a hybrid international/domestic body called the International Commission Against Impunity in Guatemala (CICIG)," Cohen wrote stressing that Ukraine should do the same.

Doh! 'Maidan Godfather' Gets His Assets Frozen by London Court
The body is supposed to monitor the work of the Ukrainian government, investigate and prosecute the country's state officials for corruption.

However, since Ukraine's problems are apparently bigger than that of Guatemala, Kiev should cede bigger portion of its sovereignty to the West: the new international body must obtain more powers and have "a minimum mandate of five years that would be extended automatically, unless it were explicitly ended through legislation."

The leitmotif of the latest publications in the Western press is that the Ukrainian leadership is "hopeless" and "new blood," most likely foreign, should be poured into the veins of the Ukrainian government.

Remarkably, Ukrainian President Poroshenko has already made a number of steps in that direction: in 2014 he championed the adoption of the laws to allow foreigners to assume top level government positions. Furthermore, Poroshenko signed amendments to the law on admission and presence of foreign troops on the Ukrainian territory in June 2015.

So, does it mean the Ukrainian EuroMaidan movement and the US-backed February 2014 coup have resulted in the loss of sovereignty and independence? The case has all the earmarks of that.