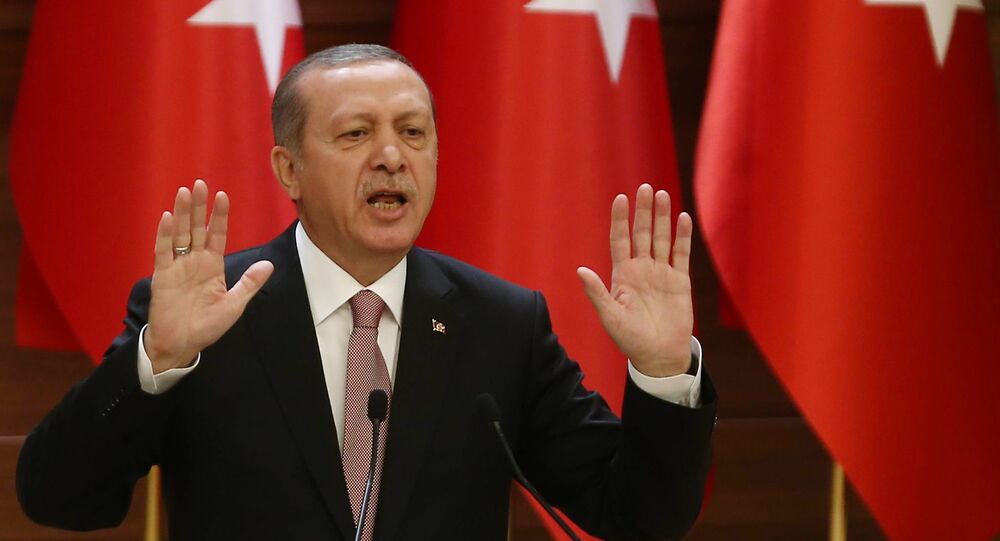 Turkish President Recep Tayyip Erdogan has a long and embarrassing history of backstabbing his political associates, trading partners and military allies, US academic James Petras writes, adding that we should question whether Ankara's "Pasha" would be replaced soon.

"Turkish President Recep Tayyip Erdoğan has a long and ignoble history of betraying political associates, trading partners and military allies; of pledging friendship and then bombing his 'friends' and murdering citizens; of negotiating 'in good faith' and then killing rivals; of playing democrat then behaving like an ordinary demagogic dictator," Professor Petras points out in his article for Information Clearing House.

According to Petras, the Turkish President's support for Daesh comes in a variety of forms. Erdogan is bombing the Syrian Kurdish fighters who resist the Islamist mercenaries. He instructed his country's air force to shoot down the Russian Su-24 bomber which was engaged in defending Damascus from a terrorist insurgency. Erdogan's family is involved up to eyeballs with Daesh in the smuggling of oil from Syria and Iraq. Ankara is providing medical assistance to wounded Daesh jihadis; additionally, it is training and arming terrorists in Turkish bases.

There is a mutually beneficial relationship between Erdogan and radical Sunni Islamists, the academic suggests.

"Erdogan uses ISIS (Daesh) operatives to terrorize his own domestic opposition, including terror bombing a gathering of Kurdish 'socialist youth' in the town of Suruc on July 20, 2015, which killed 33 and the massive bombing in Ankara on October 10 of a 'peace and justice' march, which killed over 100, targeting trade unionists, leaders of professional associations, community activists and members of a democratic Kurdish electoral party and wounded many hundreds," the professor narrates.

© AP Photo / Khalil Hamra
'Moderate' Islamism? Washington, Brussels Playing With Fire in Syria, Iraq
The US academic recalls that during the legislative election of 2015, Islamists joined forces with Erdogan's Justice and Development Party (AKP) party members to launch a series of attacks against the opposition parties, most notably the Kurdish People's Democratic Party (HDP), "to ensure that Erdogan secured a super-majority."

According to Professor Petras, Erdogan is using Islamic extremists to pursue both external and internal political objectives. "Erdogan has a decade-long strategic alliance with the militant Wahhabi terrorists who now make up ISIS (Daesh)," he underscores.

Over the past 40 years, Erdogan has transformed from a "Muslim democrat" to an "authoritarian Islamist ruler." During his long accent to power, Recep Erdogan has repeatedly betrayed his associates and suppressed former allies.

Incredible as it may seem, the bizarre mixture of Erdogan's Islamism and "brutal neo-liberalism" has attracted support from Brussels, Wall Street and London's financial sector, according to Petras. The Turkish leader adopted IMF's "stabilization and recovery" program by reducing wages, salaries and pensions and privatizing profitable public sector enterprises. By adhering to the IMF's unpopular measures, Erdogan has gained the favor of foreign investors.

© AP Photo / SANA
Underneath It All: The Real Reason Washington Wants Assad to Go
Apparently, therefore, the Western leaders turned a blind eye to Erdogan's illicit oil trade with Daesh as well as the smuggling of Iraqi and Syrian antiquities. Alas, through the illegal trade, Erdogan's family was fuelling Daesh terrorists.

Nothing hinted at any trouble as of early September 2015. But Moscow's military operation to take out Daesh came as a surprise to the Turkish leader.

Furthermore, Russia's military crackdown on Daesh's sources of funding dealt a heavy blow to Erdogan's illicit oil business, prompting the latter to retaliate against Moscow. On November 24, a Turkish F-16 shot down a Russian Su-24 bomber over Syrian territory.

Russian President Putin called Ankara's move a "stab in the back" from the accomplices of terrorism.

According to the US academic, by betraying Russia, Turkey's longstanding ally, the Turkish leader "bit his own tail." In response to Turkey's treacherous action, Russia imposed visa restrictions and economic sanctions on Ankara.

"By protecting his own family interests, Erdogan stabbed more allies in the back:  The Russians, as well as large sections of the Turkish capitalist class!" Professor Petras stresses.

"Erdogan's road to absolutist power is strewn with indiscriminant purges, terror and deceit; violence against environmental and liberal protestors in Gezi Park and moderate Gulen Islamists; jail sentences and firing of journalists and publishers, military officials and judges; repression of workers and capitalists; terror bombing against activists and democrats; and war against Kurds and Syrians," Professor Petras elaborates.

On the one hand the Turkish "Pasha" increases his own power, while on the other he violates the interests of the Turkish nation.

"Who knows under what circumstances Pasha Recep will be replaced?" Professor Petras asks rhetorically.