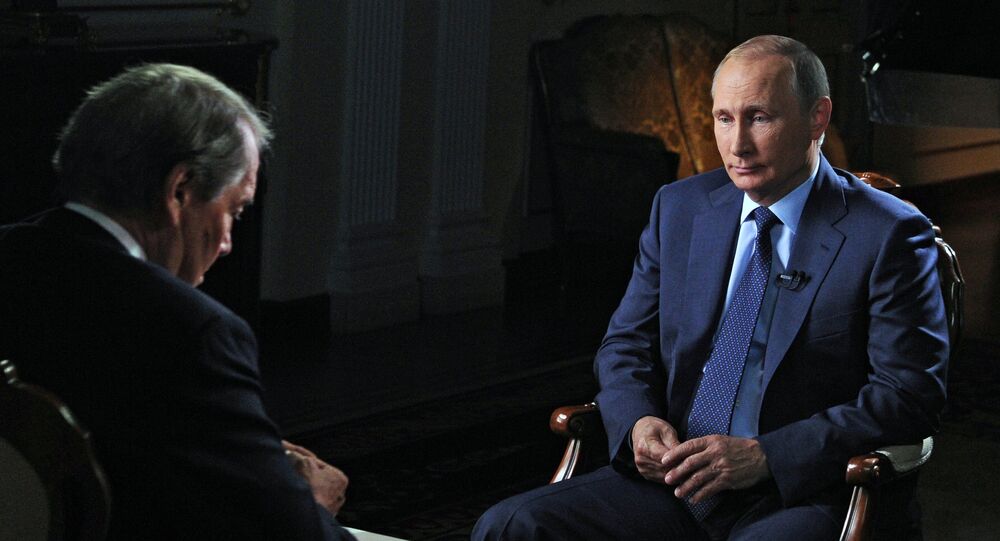 His love and pride for Russia, his pain over what is going on in Ukraine, his past as an intelligence officer and his attitude towards being called a czar – these are some of the issues brought up in Russian President Vladimir Putin's interview with American talk show host and journalist Charlie Rose.

Ahead of his much anticipated address at the 70th Session of the UN General Assembly in New York, Russian President Vladimir Putin sat down with American talk show host and journalist Charlie Rose to share his opinion on the today’s hottest news topics.

Putin on Ukraine: ‘It is absolutely unacceptable to address issues, including controversial ones, as well as domestic issues of the former Soviet Republics through the so-called color revolutions, through coups and unconstitutional means of toppling the current government’.

Of course, Russia’s closest neighbor, Ukraine, is part of the daily news agenda.

© Sputnik / Michael Klimentyev
60 Minutes of Putin: Syria’s Assad Combats Terrorism, While US-Backed Fighters Join ISIL
President Putin cast some light on why the Ukraine issue is such a huge problem for Russia.

“Ukraine is the closest country to us. We have always said that Ukraine is our sister country and it is true. It is not just a Slavic people, it is the closest people to Russia: we have similar languages, culture, common history, religion etc.”

He also revealed what he believes is completely unacceptable for Russia.

“Addressing issues, including controversial ones, as well as domestic issues of the former Soviet Republics through the so-called colored revolutions, through coups and unconstitutional means of toppling the current government. That is absolutely unacceptable. Our partners in the United States are not trying to hide the fact that they supported those opposed to President Yanukovych.”

Asked whether he believed the United States had something to do with the ousting of Yanukovych, causing him to flee to Russia, the president replied that he, in fact, knew this for sure, at the same time describing his sources.

“We know the ways the assistance was provided, we know how much they paid them, we know which territories and countries hosted training and how it was done, we know who the instructors were.”

“We know everything. Well, actually, our US partners are not keeping it a secret.”

Putin on the sovereignty of Ukraine: ‘At no time in the past, now or in the future has or will Russia take any part in actions aimed at overthrowing the legitimate government.’

© AFP 2020 / Jewel Samad
Touching Base: Putin and Obama Talk Ukraine, Iran Nuke Deal, Syrian Crisis
The Russian leader also stressed that Russia respects the sovereignty of Ukraine and Russia had not and would not take any part in any activities aimed at overthrowing the legitimate government of any country. He added that Russia would never resort to the use of the military force in such a case.

However, the president called on other countries to respect the sovereignty of other states, including Ukraine.

Putin on Russia’s military presence in Ukraine: ‘If we keep our troops on our territory on the border with some state, it is not a crime.’

“And if we keep our troops on our territory on the border with some state, you see it is a crime?”

Putin on his rating and popularity: ‘There is something that unites me and other citizens of Russia. It is love for our Motherland.’

The sufferings and hardships of the Second World War remain the unifying factor of the Russian nation.

© Sputnik / Vladimir Pirogov
12 Reasons Why US Does Not Want to Win Wars It Instigates Worldwide
“Yes, my family and my relatives as a whole suffered heavy losses during the Second World War. That is true. In my father's family there were five brothers and four of them were killed, I believe. On my mother's side the situation is much the same.”

“In general, Russia suffered heavily. No doubt, we cannot forget that and we must not forget, not to accuse anyone but to ensure that nothing of the kind ever happens again.”

Putin on democracy: ‘There can be no democracy without observing the law and everyone must observe it – that is the most basic and important thing that we all should remember.’

© Sputnik / Sergey Guneev
The West Is Moving Putin’s Way - Former British Ambassador to Russia
As for those tragic incidents where lives are lost, including those of journalists, unfortunately, it happens in all countries around the world, he said.

But if it occurs in Russia, the president stressed, the authorities take every step possible to ensure that the perpetrators are found, identified and punished.

There were a number of questions that made the president smile and answer light-heartedly.

The host's question on the disintegration of the Soviet Union and the possible recreation of a sphere of influence, which President Putin might think Russia deserves, made him smile.

“Your questions make me happy,” he responded. “Somebody is always suspecting Russia of having some ambitions, there are always those who are trying to misinterpret us or keep something back.”

“I did say that I see the collapse of the Soviet Union as a great tragedy of the 20th century. Do you know why? First of all, because 25 million Russian people suddenly turned out to be outside the borders of the Russian Federation.”

© Sputnik / Evgeny Biyatov
The President's Speech: Best Quotes of Vladimir Putin Ahead of UN General Assembly Address
“They used to live in one state; the Soviet Union has traditionally been called Russia, the Soviet Russia, and it was the great Russia. They used to live in one country and suddenly found themselves abroad. Can you imagine how many problems came about?”

“First, there were everyday issues, the separation of families, economic and social problems. The list is endless.”

“Do you think it is normal that 25 million people, Russian people, suddenly found themselves abroad?”

“The Russians have turned out to be the largest divided nation in the world nowadays. Is that not a problem? It is not a problem for you as it is for me.”

And then there were some personal questions, such as how he feels being called a czar.

The president light-heartedly answered that the title does not fit him, though he is used to being called many different things. In fact, it does not matter to him what people call him.

He also talked about his past as an intelligence officer, admitting that every stage of one’s life has an impact on the person.

“Whatever we do, all the knowledge, the experience, it stays with us, we carry it, use it in one way or another. In this sense, yes, you are right — there is no such thing as a former KGB man. Once a KGB man, always a KGB man.”

“Once, somebody from the CIA told me that the training you have is important, that you learn to be liked as well. Because you have to charm people, you have to seduce them,” Charlie Rose said.

“Well, if the CIA told you so, then it must be true. They are experts on that,” laughed the president.

President Putin refused to assess the President of the United States, saying he is not entitled to do that. This is up to the American people.

Finally he revealed what is most important to him.

“What is important is what you think you must do in the interests of the country, which put you in such position, such a position as the Head of the Russian State.”