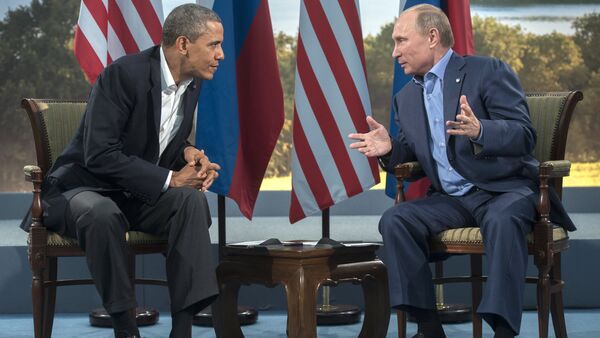 © Sputnik / Sergey Guneev
/
Go to the mediabank
Subscribe
International
India
Africa
Ahead of the scheduled bilateral meeting between the presidents of Russia and the US, former British ambassador to Russia Tony Brenton has opined that the Western policy, in fact, “does seem to be moving the way Putin wants”, at least with respect to two key areas of discord – Syria and Ukraine.

“Western policy does seem to be moving the way Putin wants,” the former diplomat suggested in an article he recently wrote for The Independent.

His opinion reflects the recently changed rhetoric of the US and the UK.

Washington's Claims Putin Sought Meeting With Obama 'Contradict Reality'
“The US and (as of Friday) the UK, having spent years demanding Assad’s instant departure, now concede that he might stay on in an 'interim' capacity, Brenton said.

He added, "the US Defense Secretary, after a year of refusing contact with his Russian [counterpart], opened such contact last week in order to “deconflict” the two countries’ actions on the ground.  Whatever the obfuscations around tomorrow’s meeting, Syria will be a key part of the agenda. The reality is simple", Brenton explains.

“As Putin says (and on this is to be believed), Russia’s overriding aim is to block the rise of Islamic fundamentalism, which is a direct domestic threat to [Russia] in the Caucasus and elsewhere.”

“They have seen the West bungle this, notably by the chaos left behind in Iraq and Libya. The West’s support for a moderate opposition in Syria is a delusion (didn’t the responsible US general tell Congress a few days ago that that opposition had “four or five” US-trained soldiers in the field?).”

60 Minutes of Putin: Assad Combats Terrorism, US-Backed Fighters Join ISIL
The only choice in Syria, he says, is between “the nasty (Assad) and the nasty and dangerous (Islamic State).”

The Russian president is bolstering the faltering Assad to prevent IS inheriting Syria. And the West, which is as threatened by IS as Russia, should join him.

Ukraine is also expected to be on the agenda.

“But here, too, it looks as though the debate is moving in Russia’s direction,” the diplomat says.

“In February this year, when the Minsk II Peace Agreement was signed as the basis for a ceasefire and political settlement, both the US and the UK were dismissive. The agreement, we quietly said, would rapidly collapse. Our policy remained to “change Putin’s calculus”, meaning to use sanctions to compel Russia to back down,” his article reads.

But this has not worked, he laments.

“With all its imperfections, Minsk has in fact helped to end the fighting, and is still very much in play.”

“And, while the sanctions have done some economic damage, they have not changed one jot Putin’s determination to retain Crimea and the whip hand in eastern Ukraine.”

Why Meeting Between Putin, Obama May be Breakthrough for World Politics
On the contrary, the diplomat says, they have cemented Russian public opinion firmly behind President Putin.

Although Russia is experiencing problems and its future is not that optimistic, he says, nevertheless, Vladimir Putin may recall Madeleine Albright’s description in 1998 of the US as the “indispensable nation”, vital to tackling the world’s problems”.

“And he may take some pleasure in his discussion with Barack Obama in noting that, for some of those problems – Iran, Syria, Ukraine – Russia, too, is indispensable."