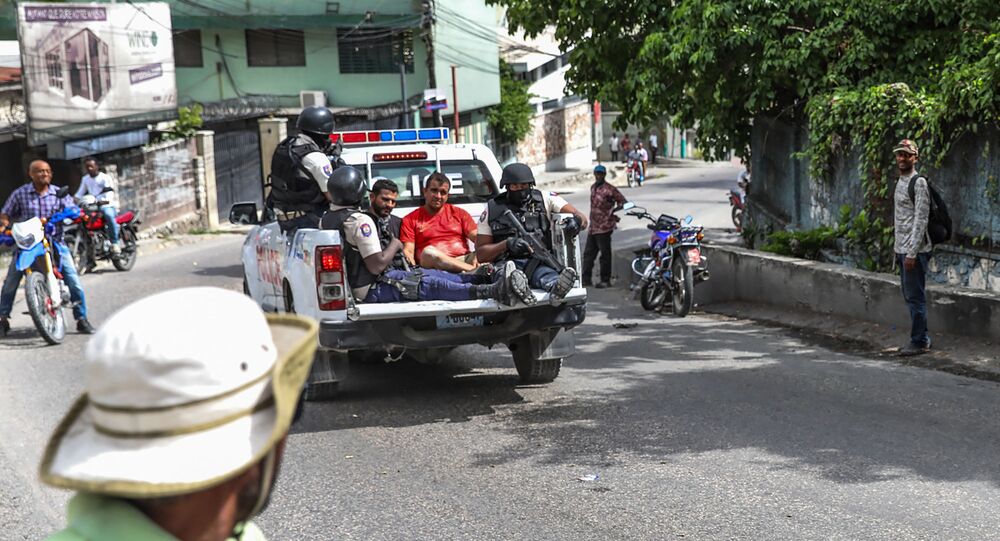 53-year-old Haitian President Jovenel Moise was gunned down at his residence outside Port-au-Prince on Wednesday, thrusting the instability-prone nation into further chaos. Police say they’ve identified a ‘commando team’ of 28 attackers, among them 26 Colombians and two Americans, who they say are responsible for the gangland-style killing.

Haitian law enforcement has released footage of suspected US and Colombian mercenaries being dragged into police headquarters after being captured with the help of local residents.

Video shows a large group of men, some of them covered in blood, being brought in face down by masked police and placed on the floor. On a table in front of them, police placed a haul of weapons and other equipment, ranging from shotguns and automatic rifles to walkie talkies, heavy duty sledgehammers, bolt cutters and Colombian passports.

Separate amateur footage shot earlier shows a large group of citizens walking some of the suspected killers through the streets, some of them tied up with rope and bloodied.

Two of the suspects were also shown being driven through the street in the back of a police pickup, surrounded by three heavily-armed cops.

President Jovenel Moise was shot down at his private residence in a suburb outside Port-au-Prince on 7 July. The brutal, gangland-style killing saw Moise hit 12 times with high-caliber rounds, with bullets striking him in the head, chest, and hips and blowing out his eye.

Moise’s wife, first lady Martine Marie Etienne Moise, was also heavily wounded in the attack, suffering gunshot wounds to her arms and thigh, and injuries to abdomen and hand. She is said to be in critical condition, and has been airlifted to a Miami, Florida hospital for treatment.

Police said Thursday that they’d identified 28 suspects. 17 of them have been apprehended, among them two Haitian-born US nationals James Solages and Joseph Vincent. Police say three other suspects were killed by police during attempts to apprehend them, and that eight others remain on the run.

On Thursday, Justice of the Peace Clement Noel told reporters that the two Americans testified that they were mere “translators,” and that the mercenaries planned to “arrest” Moise under the warrant of an investigating magistrate, not kill him. The nature of the “warrant” was not elaborated on. The captured Colombians reportedly include ex-military.

Who Was President Moise?

Moise’s killing put the already poverty-stricken and instability-prone Hispaniola Island-nation of Haiti under martial law. Acting Prime Minister Claude Joseph, a Moise appointee, was named the country’s de facto leader. The state of emergency is expected to last two weeks, during which time police have been given expanded powers to help them hunt down the remaining killers.

Moise was assassinated about two months ahead of Haiti’s much-awaited 26 September presidential and legislative elections, which were expected to coincide with a referendum to approve a new constitution.

© REUTERS / STRINGER
Dominican Republic Has No Data Any Assassins Crossed Over From Haiti
The former businessman-turned president was elected in November 2016 in a highly disputed election, with his conservative liberal center-right Haitian Tel Kale Party criticized for alleged large-scale corruption schemes involving the Clinton Global Initiative in the aftermath of Haiti’s devastating 2010 earthquake. Moise’s presidency plagued by mass protests for much of its tenure, particularly its final months, over its prioritisation of profit-generating enterprises serving foreign interests, and his authoritarian rule-by-decree style of governance. The US State Department and the United Nations backed Moise’s presidency to the hilt, and supported him in his spat with the country’s Superior Judicial Council about whether he should continue to be able to serve until February 2022 after his term formally expired in February 2021.
...
Reddit
Google+
Blogger
Pinterest
StumbleUpon
Telegram
WhatsApp
442

Haiti’s Moise Assassinated, and a History of Fascist Plots in the US