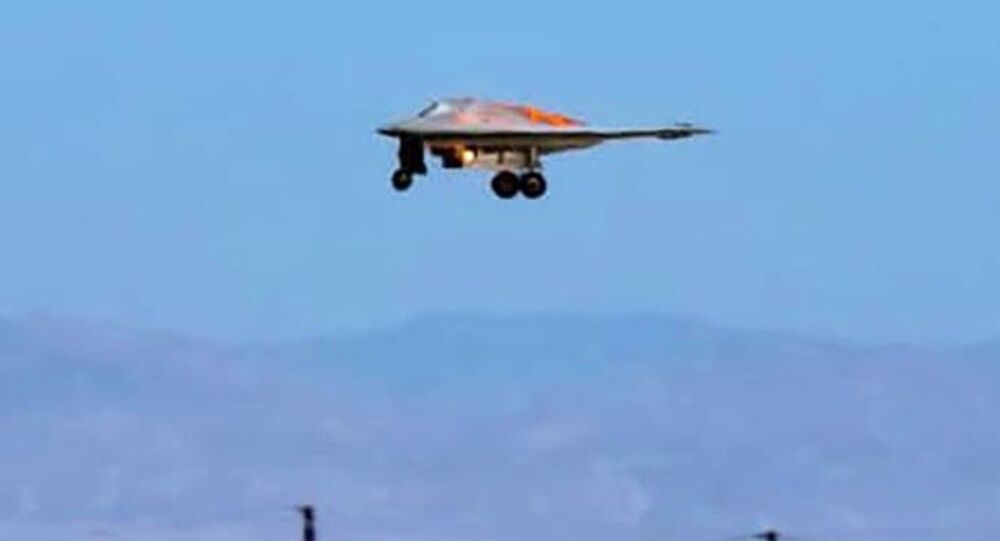 Few publicly available photographs exist of the mysterious RQ-170 Sentinel, developed by Lockheed Martin's Skunk Works as a stealth unmanned aerial vehicle (UAV) and nicknamed the "Beast of Kandahar” for its role in the US war in Afghanistan.

The Air Force's 432nd Wing at Creech Air Force Base in Nevada revealed the deployment of the mysterious, delta wing-shaped stealth drones earlier this week, alongside information relating to a visit to Creech by General Mark Kelly, commander of Air Combat Command, and Command Chief Master Sergeant David Wade.

Typically, details pertaining to Lockheed Martin’s advanced unmanned aircraft are scarce and highly classified, even a decade since their existence was revealed.

Remotely piloted aircraft (RPAs) are “meeting the needs of combatant commanders today – in both contested and non-contested environments," added Air Force Colonel Stephen Jones, the Wing's commander, in a statement.

"The wide array of mission sets the MQ-9 and RQ-170 are asked to perform remains our hallmark – we do not shy away from these tough tasks; we remain ready to take them on in all environments."

No further clarification was offered regarding where the RQ-170s had deployed or when.

To date, few details about Lockheed Martin’s futuristic tailless, flying wing aircraft have been released, with the "RQ" designation indicating it does not carry weapons.

One of the US Air Force's most secretive assets features bat-shaped wings, blended fuselage, a pointed nose, and a tricycle type landing gear, according to Airforce Technology.

For seizing real-time imagery or videos, an electro-optic camera was incorporated under the front fuselage section. The RQ-170 can be controlled either manually or through autonomous mode.

The RQ-170 Sentinel is fitted with an active electronically scanned array radar and is powered by a single General Electric TF34 turbofan engine.

The next-generation drones have and continue to operate overseas, yet according to the outlet, the service has always been tight-lipped regarding specific operational deployment and exploits of the unmanned aircraft.

Most information is said to have been obtained via the Freedom of Information Act (FOIA), coupled with reports based on anonymous sources.

Between 20 and 30 of the Sentinel drones are understood to be in service, with two units publicly known to operate RQ-170s, the 30th and 44th Reconnaissance Squadrons, assigned to the 432nd Wing's 732nd Operations Group.

The 44th Reconnaissance Squadron was activated at Creech Air Force Base, Nevada on 1 April 2015 to fly unmanned aerial vehicles in the reconnaissance role.

The US Air Force acknowledged in 2020 that the RQ-170 was at least one of the types that it flies.

There is credible information, according to the media outlet, that the US Air Force deployed these stealth drones for operations over four countries, Afghanistan, Pakistan, Iran, and South Korea.

The drones are also said to have been flown over areas of the Western Pacific from Andersen Air Force Base on Guam.

Nicknamed the "Beast of Kandahar” for its role in the US war in Afghanistan, more is known about the Sentinel after Iran shot one down in 2011.

The US lost the RQ-170 Sentinel over Iran in Dec 2011. Flying out of a US airbase in Afghanistan.

It’s not exactly clear how the drone came down, but it was intact and displayed on Iranian TV with the wing “glued” back on. Iran showed a reversed engineered mock-up in 2014. pic.twitter.com/vbqsAgkc3o

​The RQ-170 was deployed to Afghanistan by the Pentagon during Operation Enduring Freedom. Reports claimed it was used by the US Armed Forces to gather intelligence that led to the May 2011 killing of al-Qaeda founder, Osama bin Laden during the U.S. raid in Pakistan.

On 5 December 2011, an RQ-170 went down near the city of Kashmar in northeastern Iran. After originally denying the reports, then-President Barack Obama acknowledged that the downed aircraft was a US drone and asked Tehran to return it.

​Iran is said to have subsequently reverse-engineered the UAV to produce drones based on the captured RQ-170.