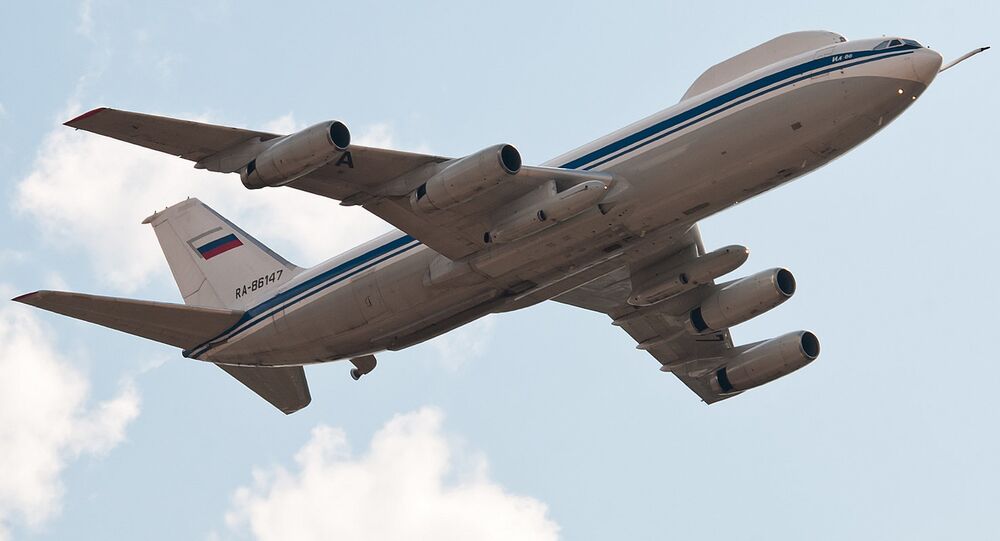 Russia and the US are the only two nations in the world to possess ‘Doomsday' planes, which earn their nickname from the fact they're designed to survive a nuclear war while acting as an airborne command post for top brass.

Thieves broke into a closed airfield, opened a cargo hatch, and stole radio equipment from an Ilyushin Il-80 airborne command and control aircraft in Russia’s Rostov region, a representative of the Directorate of Transport of the Russian Ministry of Internal Affairs has confirmed to Sputnik.

The robbery took place while the plane was undergoing maintenance.

Officials from the Beriev Taganrog Aviation Scientific Technical Complex, the Russian United Aircraft Corporation subsidiary facility where the plane was being repaired, called the police on 4 December after technicians discovered the theft of 39 radio station units and five components from five similar but dismantled units. Officials have not yet released any more details about the stolen equipment.

The Il-80 in question, a modification of the Soviet-era Ilyushin Il-86 wide-body passenger jet airliner, is one of four Il-80 mobile airborne command and control aircraft at Russia’s disposal. Nicknamed "Doomsday" planes for their apparent ability to survive nuclear war, the aircraft were designed to transport the country's high-ranking officials to safety while acting as an airborne command post.

According to media reports, an engineer working on the plane confirmed that all of its components were present when it was brought in for servicing in 2019, and its main entrance, cargo hatch, and three emergency hatches were sealed as of 26 November, the last time it was checked.

Investigators have confirmed that they found fingerprints and footprints thought to have been left by the radio robbers.

The targeted Il-80, tail number RA-86149, made its first flight in May of 1985. Most other information about the aircraft model is highly classified – the planes rarely appear in public and have only featured in Russia's annual Victory Day parade once on 9 May, 2010.

Russia’s "Doomsday" planes enable those onboard to take command of all branches of the Russian military, including its strategic nuclear forces, assuming they have the authorisation. The aircraft use both military and civilian satellite comms, are armed with serious defence systems, and are each equipped with a unique transmitting antenna at their rear to keep them in contact with submerged submarines. The Il-80 is completely windowless, presumably to shield the pilots from the blinding light of a nuclear explosion.

In 2016, Russia reportedly received its first next-generation airborne mobile command post – based on a modified Ilyushin Il-96-400 (a Soviet-designed long-haul wide body jetliner of the same kind that serves in Russia’s presidential aircraft fleet, as well as Cuba’s Cubana airline). However, according to other sources, the new plane is still in development.

Twitter/ѴѺҎ
‘Purely Coincidental’: Airborne Doomsday Planes Not Tied to Trump’s Coronavirus, STRATCOM Says
The US is the only other country that has so-called "Doomsday" planes: four Boeing E-4B Nightwatch airborne command posts. These aircraft cause a real stir whenever they take to the skies, and like the Il-80, are set to eventually receive a next-gen replacement.
...
Reddit
Google+
Blogger
Pinterest
StumbleUpon
Telegram
WhatsApp
771