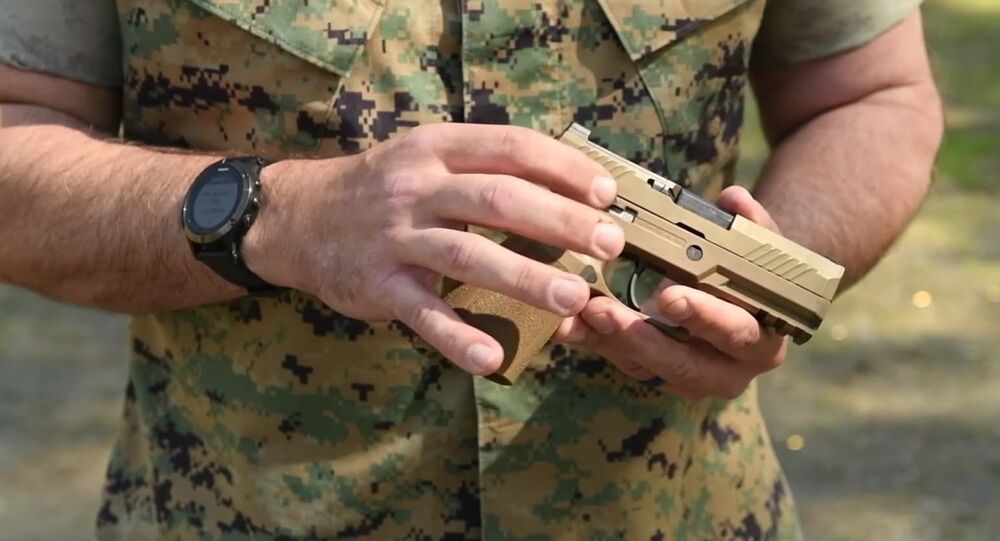 The adaptation by the US Marines of a Sig Sauer pistol is considered the first major service-wide sidearm replacement since the Reagan era. In the past, Marines received either the M9, M9A1, M45A1, or the M007, along with other versions.

The US Marine Corps will issue SIG Sauer M18 pistols to its agents, replacing all previous handguns that have been in service since the time of former US President Ronald Reagan’s administration, according to Marine Corps Systems Command officials in a Tuesday press release.

“All Marine Corps units with a pistol will receive an M18,” Brian Nelson, M18 project officer at MCSC, said in a statement.

The Marine is projecting the replacement, which began earlier in September, to be concluded by fiscal year 2022.

Formal Marksmanship Training Centers, Reconnaissance Battalions, Provost Marshall Offices, and Marine Corps Security Forces are said to become the first units that will receive the Sig Sauer pistols, according to the press release. The process will see replacing previous pistols, including the M9, M9A1, M45A1, and M007.

The M18 is has been praised by Pentagon officials as being less expensive, lighter, and having only one trigger pull, instead of two as in previous handguns, as well as possessing adjustable grips for different hand sizes.

SIG SAUER is proud to introduce the long-awaited P320-M18, the civilian version of the US Military's M18, the official sidearm of the U.S. Marine Corps. Click https://t.co/duIyVDUqMW for more information and to find a dealer! #M18 #P320M18 #MHS #SIG #SIGSAUER #NeverSettle pic.twitter.com/PdNWZsTZmA

“The M18 is unique in that it is a utility player capable of supporting a broad range of missions in which a handgun is required,” said Billy Epperson, Infantry Weapon Capabilities Integration officer at the Marine’s Combat Development and Integration. “Because of this versatility, the M18 will replace the four pistols in the Marine Corps inventory.”

Tom Vass, the military's project officer for the US-built M18, said that the adaptation of the weapon, based on the Sig Sauer Model P320, is important for improving Marine agent safety during missions.

“Overall, the adoption of the M18 by the Marine Corps is an extremely positive decision that will benefit the Corps and enhance Marines’ safety and effectiveness when conducting missions,” Vass said.

The replacement of older pistols is said to be part of an Army-led program fielded in 2017 that included adopting the M18, as well as the M17, a full-size version of the handgun.

In June, the US Air Force announced plans to provide all service members who are required to carry firearms with polymer-made M18 handguns. The Air Force purchased 125,000 M18s from Sig Sauer for $22.1 million, with delivery anticipated to have been completed by August.