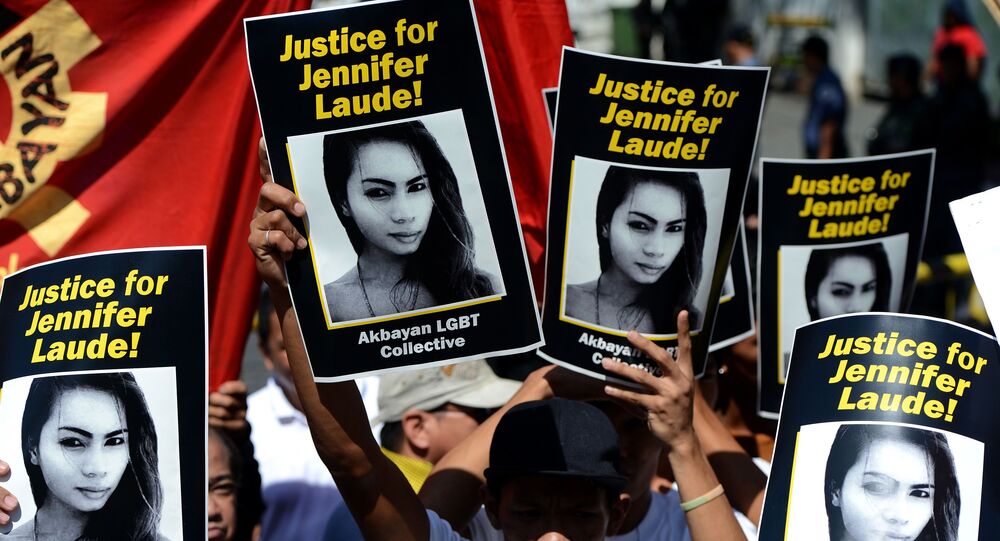 ‘Servility to Imperialist Interests’: Duterte Slammed for Pardoning US Marine Who Killed Filipina

In late 2015, Marine Private First Class Joseph Scott Pemberton was sentenced to between six to 10 years in prison for the October 2014 murder of a trans Filipina woman in a hotel in Olongapo, a port city about 125 km northwest of the capital, Manila.

Philippines President Rodrigo Duterte has granted US Marine Joseph Pemberton an absolute pardon for the killing of 26-year-old Philippines national Jennifer Laude (born Jeffrey Laude), with the move prompting a backlash from the victim’s family and local rights groups.

“The president has erased the remaining punishment against Pemberton…He can now go home because of the pardon,” Duterte spokesman Harry Roque told reporters in a statement.

The government’s announcement came after Olongapo City Regional Trial Court ordered Pemberton’s release late last week, citing good behaviour during time served. The Marine continued to be held despite the order due to an appeal by the Department of Justice. However, Duterte’s signature of the pardon order nullified the appeal.

In a statement, Virginia Suarez, legal counsel to Laude’s family, “strongly” denounced the decision to pardon Pemberton, calling it a “mockery of our judiciary and legal system” and “another injustice not only to Jennifer Laude and family but a grave injustice to the Filipino people”.

© REUTERS / Romeo Ranoco
FILE PHOTO: U.S. Marine Lance Corporal Joseph Scott Pemberton (C) is escorted by U.S. security officers into a court in Olongapo city, north of Manila December 1, 2015
© AFP 2020 / STR
Manila Vows to 'Call Up Washington' if Beijing Attacks Philippine Warships in South China Sea
The attorney suggested that there are already “too many” convicted Filipinos serving into their twilight years, but that the president chose to pardon an American instead. “Why give it to a foreigner, a US soldier who committed an atrocious crime?” she asked. The Laude family deserves “an apology from Pemberton,” and that “the entire Filipino people deserve an apology from Duterte,” Suarez said.

Edre Olalia, a representative of the National Union of Peoples’ Lawyers, echoed the sentiment, calling the pardon a “brazen and shameless sellout” of Manila’s sovereignty.

Karapatan, a local human rights group, similarly called Duterte’s decision to pardon Pemberton “a despicable and shameless mockery of justice and servility to US imperialist interests”. The group suggested that Laude’s murder was just the latest “violation” of the Philippines “by US military intervention in the country.”

© AP Photo / Bullit Marquez
Philippine's Duterte Reportedly Vows to Lob Grenade at Critics if Hauled Before International Court
Pemberton arrived in the Philippines as part of the contingent of US forces for joint training with Filipino troops in October 2014. He is said to have met Laude, a sex worker, in a dance club, and gone with her to a motel, where he choked and drowned her in a toilet bowl after discovering that Laude had a penis. Initially claiming that he attacked Laude in self-defence, the disgraced serviceman later admitted to choking her, but said he left her alive in the motel bathroom. However, he also reportedly told two fellow Marines back at base that he had “killed a he/she”.

Laude’s 2014 murder caused major protests in the Philippines against the defence agreement with the US, including over the fact that Pemberton was detained in US military custody before and during the trial, and has served his sentence at Camp Agunaldo, a Philippines military custodial centre in Quezon City, instead of a national penitentiary.