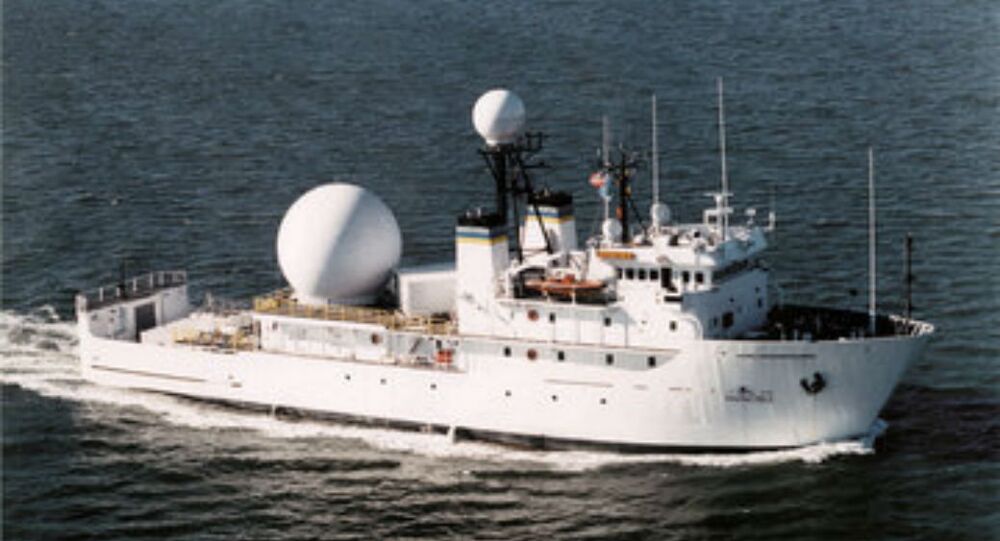 The US Military Logistics Ship that Carries a Secret

Under the aegis of the US Military Sealift Command, the white, mostly unmarked vessel is manned by 18 civilian contractors, does not appear to have any formal weapons systems, and boasts very little evidence of its presence overseas.

The US military has a vessel that little is written or said of, and whose activities it seems anxious to downplay, writes The National Interest magazine.

An outwardly inconspicuous 224-foot vessel with 2,800 ton displacement, the USNS Invincible is technically under the aegis of a branch of the US navy - the Military Sealift Command, responsible for providing sealift and ocean transportation for all US military services.

Indeed, Invincible, launched in 1986, and with no official homeport in the US, is little more than a white-painted hull maintained by 18 civilian contractors, writes David Axe, defense editor of The National Interest.

However, classed by Military Sealift Command as a “missile range instrumentation ship”, tasked with monitoring “missile launches” and collecting data, there is much more to it than meets the eye.

On board the vessel boasts the US Air Force’s sophisticated, dual X- and S-band radar called Gray Star.

Unusually, the Air Force’s radar operates on a shipborne platform, with Gray Star in fact replacing the earlier Cobra Gemini program on board the USNS Invincible, according to Defense and Security Monitor.

Originally, like other vessels of the Stalwart class of ocean surveillance ships, the Invincible was to patrol oceans searching for submarines via its large passive sonar array - the Surveillance Towed Array Sensor System (SURTASS).

In 2000 the vessel was reclassified to a AGM-24 after being refitted as a missile range instrumentation ship.

According to the outlet, in 2012 the US Air Force’s Intelligence, Surveillance and Reconnaissance Agency mentioned Gray Star among its sea-based systems that collect “scientific and technical data of foreign military capabilities and systems.”

The Air Force Intelligence, Surveillance and Reconnaissance Agency, writes the author, previously acknowledged that the Invincible is “typically” deployed to Central Command’s area, including the Persian Gulf and Indian Ocean, presumably on the lookout for Tehran’s missile tests.

Thus, in May 2012, as part of a convoy of US Navy and British vessels, the Invincible passed through the Strait of Hormuz into the Persian Gulf.

An official photo dated November 2012 shows sailors from the destroyer USS Jason Dunham somewhere in the Persian Gulf setting out to visit Invincible.

In its official history dated May 2013 the Military Sealift Command disclosed that the Invincible had been on a mission to the Mediterranean, yet already in July online ship-tracking showed the vessel was sailing in the Gulf in the vicinity of the US Fifth Fleet’s headquarters, around 50 miles northeast of Bahrain.

As the vessel later disappeared from ship-tracking sites, writes the magazine, there are strong indications it was deployed to the Persian Gulf.

In autumn 2014 the crew of the Invincible shipped a one-ton package to America via a commercial freighter, with its home address registered as Manama, Bahrain.

​Invincible’s presence in the Persian Gulf became impossible to deny when, three years later, fast-attack boats belonging to the Iranian Revolutionary Guard Corps swarmed the spy ship as she was transiting the Strait of Hormuz.

USNS Invincible was swarmed by Iranian small combat craft Saturday in the Strait of Hormuz. pic.twitter.com/T2yhnUW1YR

​In March 2017, the USNS Invincible made headlines after a close encounter with high-speed attack ships deployed by the Iranian Revolutionary Guard, ultimately compelling the US spy ship to alter her course in what the US claimed was an "unsafe and unprofessional interaction."

Iranian navy Commander Mehdi Hashemi blamed the US for the incident, calling it “unprofessional and unconventional” and warning Washington of consequences.

​In March 2020 ship-tracking websites registered the Invincible’s progress near a port in Oman, suggesting the elusive vessel is still continuing its spying missions in the Persian Gulf, concludes the publication.