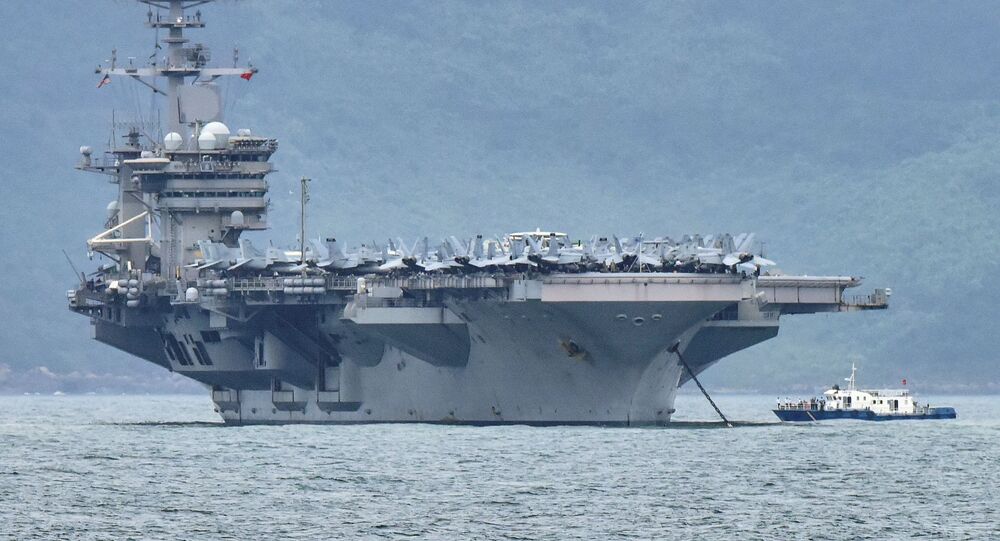 A US sailor on the aircraft carrier USS Theodore Roosevelt has died of the COVID-19 novel coronavirus, the Navy announced Monday. The warship has suffered almost 600 cases of the virus, and the struggle over how to protect the 4,000-person crew has become a national debate.

The sailor, whose name has been withheld until their next-of-kin have been informed, “was found unresponsive during a daily medical check” on the morning of April 9, the Navy announced Monday, USNI News reported. However, the Wall Street Journal noted the sailor held the rank of chief petty officer and was in their 40s.

“While Naval Base Guam emergency responders were notified, CPR was administered by fellow Sailors and onsite medical team in the house. The sailor was transferred to US Naval Hospital Guam where the Sailor was moved to the Intensive Care Unit (ICU). The sailor was declared deceased April 13,” the statement continues.

Temporarily housed on the western Pacific island of Guam while their ship is thoroughly sanitized, the Roosevelt’s crew was being given twice-daily medical checks by Navy specialists.

The huge warship arrived in Guam two weeks ago after several cases of COVID-19 were detected among the crew. With thousands of service members working and living in cramped conditions, the respiratory virus spread quickly, and Navy officials struggled to quarantine the crew. When the ship’s then-commander, Capt. Brett Crozier, sought help from Navy leaders, he was fired by then-acting Navy Secretary Thomas Modly, who also resigned during the affair after smearing Crozier and the Roosevelt’s crew.

“What we’ve learned, certainly in the Navy, is that with regard to COVID 19, we’re learning that stealth in the form of asymptomatic transmission is this adversary’s secret power,” Rear Adm. Bruce Gillingham, the surgeon general of the Navy, said during a Pentagon news conference on Friday. “We recognize despite really our best efforts, we’re going to have to learn how to operate with the virus.”

The New York Times uncovered over the weekend that the first sailors to come down with the novel coronavirus on the Roosevelt worked on the warship’s nuclear reactors. They were almost certainly infected during a call to port in Da Nang, Vietnam, two weeks prior to getting sick, which is how long the disease typically incubates.

“We mourn the loss of the sailor from USS Theodore Roosevelt who died today, and we stand alongside their family, loved ones, and shipmates as they grieve,” Chief of Naval Operations Adm. Mike Gilday said in a Monday statement. “My deepest sympathy goes out to the family, and we pledge our full support to the ship and crew as they continue their fight against the coronavirus. While our ships, submarines and aircraft are made of steel, Sailors are the real strength of our Navy.”

Three other US Navy aircraft carriers have also reported coronavirus cases among their crew, although none were underway like the Roosevelt. The USS Ronald Reagan is in Yokosuka, Japan, and the USS Carl Vinson is in Bremerton, Washington, both for repairs. The fourth ship, the USS Nimitz, is also in Bremerton, and still preparing to sail later this month.