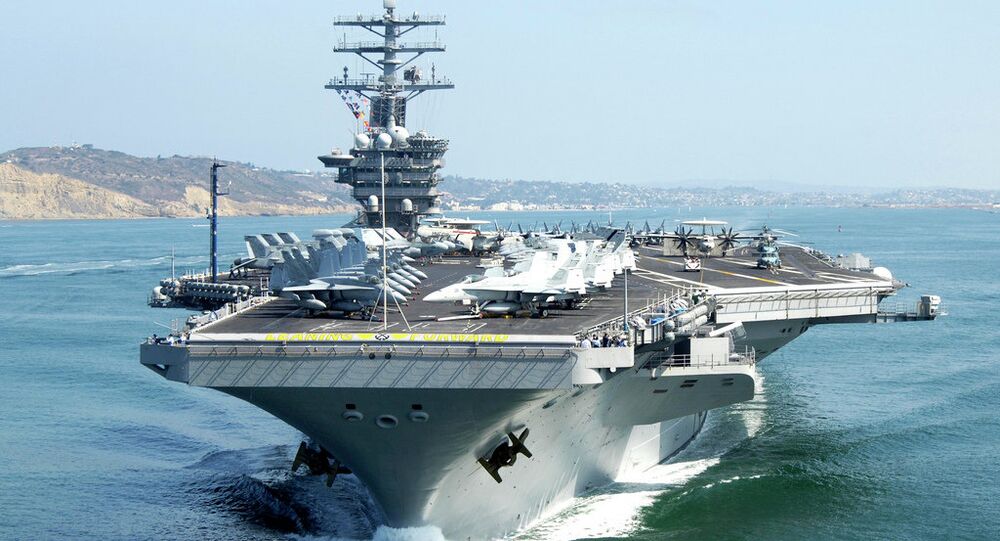 As roughly 10% of the USS Theodore Roosevelt’s crew has now tested positive for COVID-19, Pentagon leaders are questioning the wisdom of deploying another aircraft carrier. The USS Nimitz is scheduled to sail later this month, but at least one case has already been detected among her crew.

In Bremerton, Washington, thousands of US Navy sailors are preparing to put to sea: their ship, the aircraft carrier USS Nimitz, is scheduled to depart the West Coast port later this month. However, while Navy officials have been slowly bringing crew aboard the ship in an effort to segregate them from the general population and avoid an outbreak while at sea, some Pentagon leaders are questioning the wisdom of the move.

Vice Chairman of the Joint Chiefs of Staff Gen. John Hyten told reporters at a Pentagon press briefing on Thursday that there have been “a very small number of breakouts on the Nimitz,” but he cautioned that "it's not a huge breakout. It's not a big spike at this point.”

On Wednesday, Sputnik reported, along with other outlets, that two sailors assigned to the Nimitz had tested positive for the novel coronavirus, one of whom had been allowed to board the ship recently. However, the Navy clarified to Business Insider on Thursday that only one sailor had tested positive and that person had not been on the Nimitz yet; the second person, who had been aboard, produced two inconclusive tests.

However, while a positive test means it’s very likely the person has the coronavirus, a negative or inconclusive test does not mean the person does not, the US Centers for Disease Control and Prevention (CDC) have cautioned.

Yale medical professor Harlan Krumholz wrote in the New York Times last week, “If you have had likely exposures and symptoms suggest COVID-19 infection, you probably have it - even if your test is negative.”

Hyten seemed to bow to this wisdom on Thursday when he told reporters that other cases like that of the USS Theodore Roosevelt - a sister ship to the Nimitz that found more than 400 cases of coronavirus while at sea - are basically guaranteed to happen again.

“It’s not a good idea to think that the Teddy Roosevelt is a one-of-a-kind issue,” Hyten said. “We have too many ships at sea. ... To think that it will never happen again is not a good way to plan.”

Hyten also noted that 416 sailors on the Roosevelt had tested positive, while 3,190 had tested negative; the huge warship has more than 4,000 crew, as does the Nimitz. The Navy has followed the urgings of the Roosevelt’s former commanding officer, Capt. Brett Crozier, and quarantined 2,700 members of the crew on Guam, where the ship put into port after cases were first discovered. The cramped conditions aboard naval vessels, where every inch of space is used, make it impossible to observe social distancing guidelines, much less quarantine persons for weeks at a time.

“Clearly there are more cases to come,” James Stavridis, a retired US Navy admiral and former top NATO commander in Europe, told the Associated Press in an email. “The Navy and all the services have some hard choices ahead in terms of whether to pull units off the line to get them well or accept some level of casualties due to the coronavirus. I think it will be a case-by-case approach depending on the mission of the unit.”

The pandemic has affected the way the US Armed Forces work in many ways, from shutting down operations at dozens of military bases to canceling major war games and other drills. Deputy Secretary of Defense David Norquist noted at the Thursday Pentagon presser that the military will have to learn to function in the era of the coronavirus nonetheless, however.

“We’re going to need to change and adapt, because even over the coming months, the virus isn’t going to go away,” Norquist said. “We’re going to have to be able to operate in a COVID environment.”

In addition to the Roosevelt and Nimitz, the aircraft carriers USS Ronald Reagan and USS Carl Vinson have also had crew members test positive, although neither warship is at sea. However, the French aircraft carrier Charles de Gaulle detected at least 40 cases of COVID-19 while sailing in the eastern Mediterranean and is returning to Toulon early, the French Ministry of Defense announced on Wednesday.