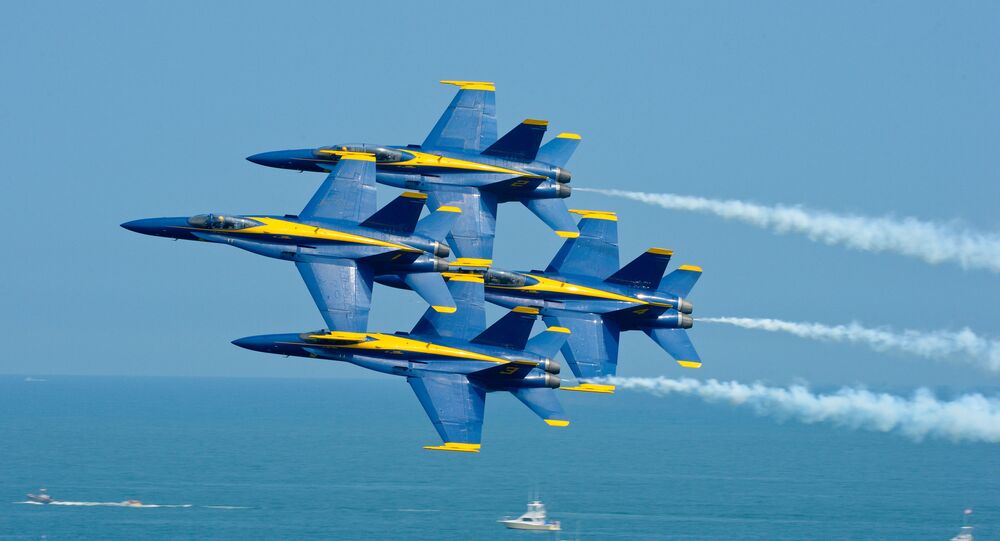 Four fighter jets in the US Navy’s aerial acrobatic team were called to an immediate “safety stand down” on August 14 after the No. 1 and No. 3 jets made momentary contact in mid-air while practicing their “Diamond 360” maneuver.

The move, which was being rehearsed for this past weekend’s Air and Water Show 2019 in Chicago, Illinois, calls for a total of four F/A-18 Super Hornets to come into close, wing-to-canopy proximity while flying along an arc.

"They fly very, very close together," Chief of Naval Air Training spokeswoman Lt. Michelle Tucker told Military.com. "No. 3 did make contact of the underside of No. 1's wing with his [glass cockpit] canopy."

Tucker clarified that in addition to the pilots being uninjured, an initial inspection of the F/A-18 Super Hornets found only a “minimal scratch” on one aircraft.

"The team trains diligently to operate in the safest possible manner," the spokeswoman asserted, "and they select only the best naval aviators and support personnel to fill their ranks."

Though the jets were replaced for the air show over the weekend, the involved pilots, Capt. Eric Doyle and Lt. James Cox, still performed.

Doyle is the commanding officer of the Blue Angels and flies jet No. 1.

"We and Capt. Doyle are confident in the team's capabilities," Tucker said prior to the weekend performance. "[Doyle] made the decision to execute the performance in Chicago this week as scheduled."

Eye-level with the diamond for the Low Break Cross. #ChiAirandWater pic.twitter.com/dqNZ8yZwBO

Aside from a number of weather-related delays, no aviation mishaps were reported from the actual Air and Water 2019 show, which was Blue Angels’ 21st performance of the year.