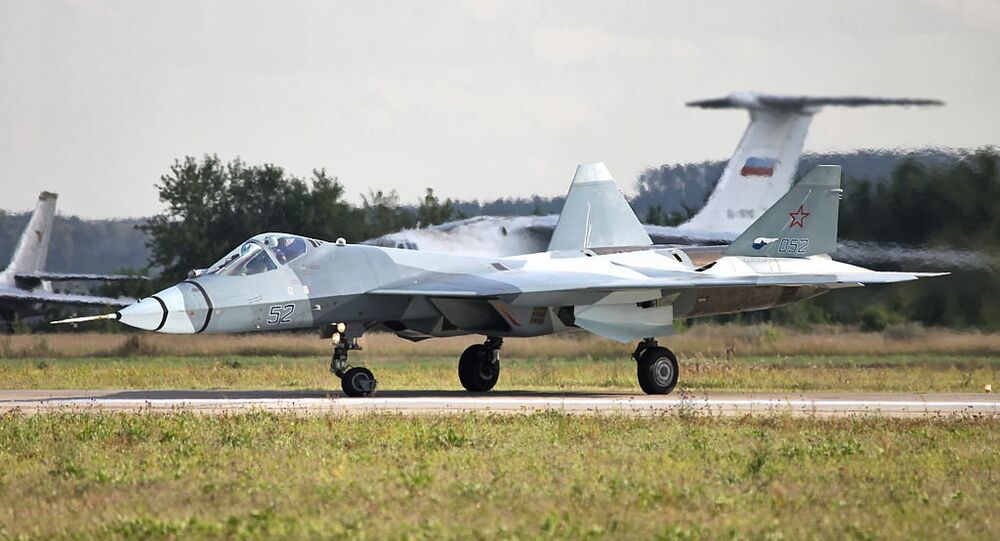 Despite Beijing having its own fifth-generation fighter, Russia may soon approve sales of the Su-57 to China - and other countries like Turkey, which has shown interest and recently lost access to the US’ F-35 over another Russian weapons deal.

Last week, Rostec director of international cooperation and regional policy Viktor Kladov was quoted by Jane's Defense Weekly as saying that in the coming weeks, Russian President Vladimir Putin may sign off on sales of the Su-57E, an export variant of Sukhoi's new Su-57 stealth fighter.

"China has recently taken delivery of 24 Su-35 aircraft, and in the next two years [China] will make a decision to either procure additional Su-35s, build the Su-35 in China or buy a fifth-generation fighter aircraft, which could be another opportunity for the Su-57E," Kladov said at a press conference at Langkawi International Maritime and Aerospace Exhibition in Malaysia. South Korea, Vietnam, India, Brazil and Turkey have also expressed interest in the plane, Asia Times reported.

Like the Su-35 Flanker-E, the Su-57 is built by Sukhoi, an aircraft design bureau that was rolled into the United Aircraft Corporation in 2006, along with other Russian plane makers. Russian Deputy Defense Minister Yuri Borisov said last July that Moscow wouldn't seek mass-production of the Su-57 until Russia's older fourth-generation jets begin to lag behind their competitors.

The first batch of Su-57s ordered included just a dozen jets, four of which were subsequently deployed to Syria. However, Sukhoi still has 10 different prototypes undergoing testing.

"The PAK FA already has an export passport," an anonymous source in the aviation industry told Sputnik Friday, referring to the plane using its internal testing designation. "The government is currently reviewing documents related to renaming the jet from T-50 to Su-57."

Alexander Pekarsh, the director of Sukhoi's Komsomolsk-on-Amur Aircraft Plant, said at a press conference in February that the factory was "working on two aircraft under the contract with the Defense Ministry," one that will be delivered this year and one next year, with the plane entering service with the Russian Aerospace Forces in 2020.

The plane is said to be comparable to the United States' F-22 and F-35 jets, both of which are built by Lockheed Martin. It has supercruise capability, stealth technology, actively phased radar and can conduct air superiority or ground attack missions. However, the Su-57 is purported to be only 40 percent of the cost of Lockheed's offering, weighing in at roughly $40 to $45 million per plane, compared to the American planes that cost well over $100 million, according to The Diplomat.

But the plane may not be up to snuff for Chinese aviators, for a variety of reasons.

Wang Yongqing, chief designer of China's Shenyang Aircraft Design Institute, wrote in Aerospace Knowledge magazine in February that while the Su-57's super-maneuverability and supercruise capabilities were impressive, these had been so emphasized at the expense of its stealth capabilities that it was questionable whether or not the jet could really be called "stealthy."

Xu Guangyu, a senior consultant at the China Arms Control and Disarmament Association, told the Global Times Sunday that if Beijing did buy the plane, it would likely do so simply to study other countries' strengths. Shenyang is presently working on the FC-31 or J-31, a fifth-generation stealth fighter with the potential to become China's staple carrier-borne fighter, and Chengdu Aerospace Corporation's J-20 Mighty Dragon has recently joined PLAAF ranks, so Beijing has no pressing need for the Su-57 specifically.

Further, nine of the 10 existing versions of the Su-57 make use of the aging Saturn AL-41F1S engine, which can't provide the plane with the thrust or fuel efficiency it needs, nor the low-observable and thrust vectoring capabilities of newer engines like Saturn's Izdeliye 30, which is still under development, The Diplomat's Franz-Stefan Gady observed Sunday.

Instead, other countries, like India, that don't have a fifth-generation jet in the works might be more interested in purchasing the Su-57 for warmaking purposes, Wang said.

Sputnik reported last May that that Turkish Foreign Minister Mevlut Cavusoglu had expressed interest in the Su-57 if Washington declined to sell Ankara F-35s — something it has now done as punishment for Turkey's purchase of Russian-made S-400 air defense systems.

"We have clearly warned Turkey that its potential acquisition of the S-400 will result in reassessment of Turkey's participation in the F-35 program, and risk other potential future arms transfers to Turkey, as well as lead to potential actions under Countering America's Adversaries through Sanctions Act (CAATSA) upon any government entities, private industry or individuals involved in such a transaction," a US State Department official told Sputnik Monday.

The Su-57E is expected to be unveiled this November at the Dubai Air Show, according to The Diplomat.