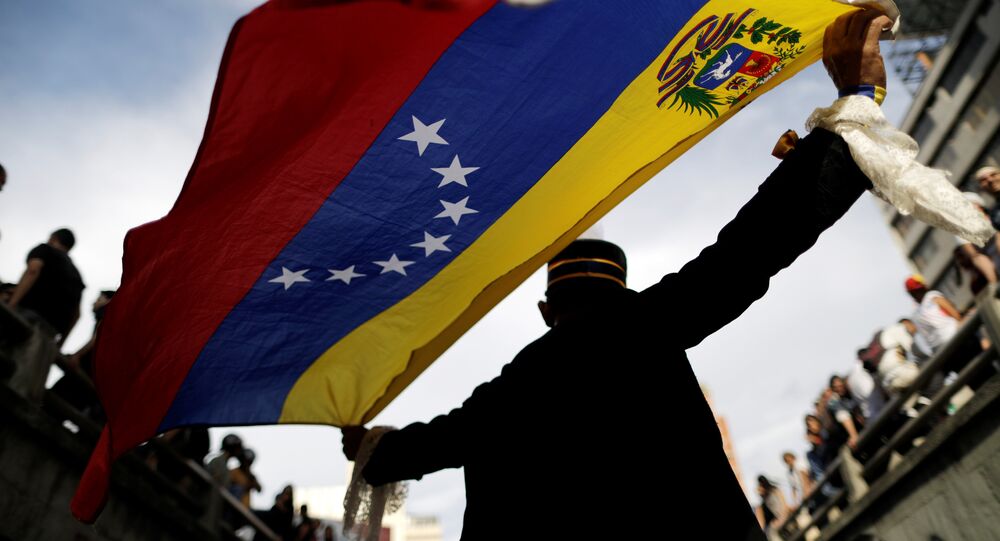 US Central Intelligence Agency Director Mike Pompeo has admitted the US is working to change the elected government of Venezuela, and collaborating with Colombia and Mexico to do so. While it's the first public acknowledgement of US meddling in the embattled country, Latin American political analysts likely won’t be surprized.

Speaking at a Q&A session at the Aspen Institute think tank's annual security forum, Pompeo said he was "very hopeful" of a "transition" in Venezuela.

Colombia and Mexico have been quick to refute Pompeo's allegations, both issuing eerily similar statements attesting to their mutual respect for international law and rejecting the existence of any plan or desire to overthrow President Nicolas Maduro's administration on either of their parts.

Despite their protestations, Pompeo's statement sparked understandable outcry in Caracas, with Maduro slamming the US, Colombia and Mexico alike.

"The director of the CIA has said the CIA and US government is working in direct collaboration with the Mexican and Colombian government to overthrow the government and intervene in our beloved Venezuela. I demand the governments of Mexico and Colombia properly clarify the declarations and I will make political and diplomatic decisions accordingly before this audacity," he said.

The exposure comes as both Maduro and Venezuela face mounting problems, with food shortages and soaring inflation — produced by the US ongoing official economic war against the country — producing much unrest, and protests sparked by the decision of the Supreme Court to absorb legislative powers from the opposition-controlled National Assembly raging since April. They have endured despite the Court reversing the ruling.

Opponents are also angry about Maduro's plan to press ahead with a vote for a Constitutional Assembly on July 30, claiming the rules of the Assembly ensure a majority for the United Socialist Party of Venezuela — in turn, Maduro claims it's the only way to restore harmony.

Critics may find Pompeo's statements ironic given the ongoing uproar in mainstream US discourse about Russia's interference in the 2016 Presidential election — allegations based on evidence-free claims issued by anonymous sources which have been refuted by cybersecurity experts and former intelligence professionals.

© REUTERS / Carlos Garcia Rawlins
US Advises Citizens in Venezuela to Gather Food, Water Ahead of Opposition Rally
Furthermore, few will surely be surprised by the revelation of US meddling in Venezuela — while the first public admission by US authorities that the CIA is actively working to undermine and topple the government of Venezuela, evidence indicates the US has worked to weaken the governments of both Maduro and his predecessor Hugo Chavez for some time — including bankrolling and organizing the 2002 coup that briefly removed the latter from power.

There's much to suggest the distribution of funds to opposition groups via organizations such as the National Endowment for Democracy has continued, while black propaganda about the state of affairs in Venezuela has reached fever pitch in the mainstream media the world over. In May 2016 unidentified US officials said they doubted Maduro would be able to complete his Presidential term, due to end after elections in late 2018.

US interference in the politics of sovereign nations the world over is arguably borderline non-newsworthy — particularly in Latin America. The US' first known foray into the southern Americas was Operation PBSuccess in 1953, which overthrew the democratically-elected, progressive government of Jacobo Arbenz.

The coup was motivated by Arbenz' nationalization program, which saw plantations owned by US fruit giant the United Fruit Company passed back into public hands. Washington feared the firm's vast profits would be dented, and Guatemala's social democratic reforms would spread across the continent, and set the CIA to work.

"The engine of American foreign policy has been fueled not by a devotion to any kind of morality, but rather by the necessity to serve other imperatives — making the world safe for American corporations, enhancing the finances of US defense contractors, preventing the rise of any society that might serve as a successful example of an alternative to the capitalist model and extending political and economic hegemony over as wide an area as possible," historian William Blum has observed.

Host photo agency
CIA-NSA Supported Brazilian Coup Back On, Rousseff Ousted Wednesday?
The result was a country fractured, which has been ruled by a series of vicious military dictatorships ever since — and rulers have routinely employed death-squads, torture, disappearances and mass executions totaling hundreds of thousands of victims.

Since then, the US has meddled — on occasion in seeming perpetuity — in many other countries in Latin America, including Haiti, El Salvador, Panama, Grenada, Brazil, Nicaragua, Chile, Dominican Republic and British Guiana. Nevertheless, their efforts are not always successful, as Cuba has palpably demonstrated.