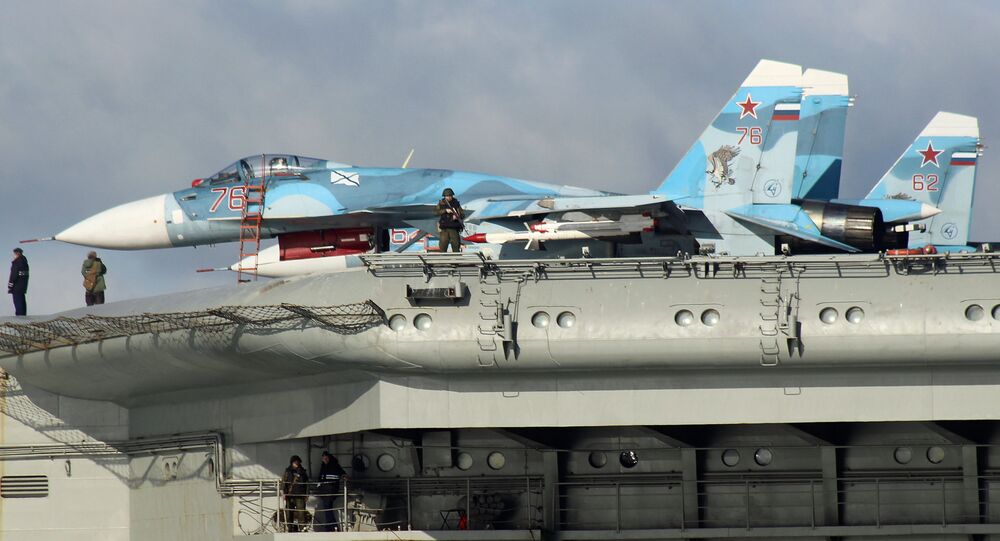 Russia has adopted a new Navy Policy Framework up to the year 2030. The document devotes considerable attention to creating high-precision long-range cruise missiles, hypersonic weapons, robotics, and more, but does not elaborate much on plans to build a new aircraft carrier. Military observer Vladimir Tuchkov explains why this may be a good thing.

The new policy framework, signed by President Putin and published on the Russian government's official web portal of legal documents on Thursday, includes a list of priorities in the sphere of naval construction.

The document confirms that the "foundation of the armament of submarines, surface ships and coastal defense forces up to the year 2025 consists of high-precision, long-range cruise missiles." After 2025, the document calls for the Navy to be equipped with hypersonic missiles and robotic systems, including unmanned underwater vehicles.

By 2030, the document says, Russia "must have, in all strategic directions, a powerful and balanced fleet, consisting of ships  designed to carry out tasks in local waters, distant sea regions and the world's oceans, as well as military aviation and coastal defense forces equipped with effective, high-precision weaponry," plus a developed system of bases and resupply points.

According to the strategy, the Navy's medium and long-term goals include a) the continued improvement and maintenance at a high level of Russia's fleet of nuclear strategic submarines, b) the development of traditional warships and their endowment with the functions of strategic non-nuclear deterrence, c) the formation of combat groups in various strategic directions based on the least favorable prognoses for the start of military operations against Russia, and finally d) a "buildup of the Navy's fighting potential through the construction and modernization of multipurpose nuclear and non-nuclear submarines, multipurpose ships, intended for solving tasks in near and distant sea zones and ocean areas, naval aviation, multipurpose ekranoplans [ground effect vehicles] as well as weaponry, military and special equipment for coastal defense forces."

© Sputnik / Ilya Bogachev
More Dangerous Than Shtorm? New Russian Aircraft Carrier Takes Shape
Regarding the prospects for the widely-discussed new Russian supercarrier, the new framework states that plans exist for such an aircraft-carrying platform to be built, without elaborating any further.

Intense discussion and planning for the construction of a new carrier platform has taken place within Russian military policy circles since the mid-2000s, but no actual project has ever gotten off the ground. In 2015, discussions moved further, after the St. Petersburg-based Krylov State Research Center and the Nevskoye Design Bureau presented Project 23000E Shtorm, the world's largest prospective supercarrier. The project has since been deemed the most probable successor to the Admiral Kuznetsov, the Russian Navy's sole aircraft carrier.

© Wikipedia / Artem Tkachenko
Model of the Project 23000E 'Shtorm' aircraft carrier
© Photo : Russian Defense Ministry
Why Russia is Prepared to Shell Out for a New Aircraft Carrier Design
Proponents of the new supercarrier insist that Russia – which borders two oceans and the two major seas (the Baltic and the Black), must develop and build new carriers in order to remain a major naval power.

Other observers argue that there are other strategic goals in the naval sphere that Russia must solve first, and that the country must first prepare the necessary material infrastructure before the construction of carriers can be considered a serious option.

Others still, including independent military observer Vladimir Tuchkov, say that there is an argument to be made that Russia can and should put off the construction of supercarriers altogether, if not for good, then at least for the foreseeable future.

For one thing, Tuchkov wrote, "from the point of view of modern naval strategy, the relevance of aircraft carriers is now being questioned even in the United States, the homeland of the world's cutting edge floating airfields."

Reason #1: Carriers Can Be Sunk

After all, "the carrier's aviation strike group, which in addition to the aircraft carrier itself, includes up to fifteen ships and escort vessels, is very slow to respond. The entire world can almost literally watch its deployment to the area where airstrikes will be carried out. This is quite justifiable, when we are talking about terrorizing a country unable to defend itself against air and space-based attack – a sort of traditional form of American gunboat diplomacy."

"But even leading American experts say that militarily developed countries like China or Russia are able to deal a powerful blow to carrier strike groups using modern anti-ship missiles before its aviation even has a chance to take off, thus instantaneously making the very idea of such an attack a moot point," the analyst added.

The reverse is also true regarding the prospective Russian carrier, Tuchkov noted, with the US having the necessary missiles to destroy any Russian supercarrier.

Just as significant, according to the observer, is the growing importance of surface ship and submarine-launched high-precision cruise missiles – especially because these systems now often have a longer range than carrier-based aviation.

There are also three other reasons why cruise missiles are a more effective tool against ground targets than carriers, Tuchkov noted. "First of all, the maximum deviation of missiles from their target has dropped to between 5-10 meters, or even less. Second, when striking targets via cruise missiles, there is no need [for aircraft] to enter the enemy's air defense zone. Third, strikes can be applied with the highest degree of secrecy, especially when carried out from submarines."

Given these facts, the analyst stressed that it was only natural to ask whether Russia today really needs to develop the kind of aircraft carrier technology that's so cherished by the US. After all, the construction of even one such ship would be an extremely expensive proposition, while a lone new carrier shared among Russia's four fleets simply wouldn't be enough.

Tuchkov noted that the construction of one carrier with a 100,000 ton displacement (i.e. the Shtorm) "would cost, by the most conservative estimates, about a trillion rubles, including research and development costs," equivalent to about $16.8 billion US.

© Sputnik / The Norwegian Armed Forces
Coincidence? Two Russian Heavy-Duty Warships Set Sail Amid NATO Growing Pressure
"But that's not all," the observer added. "To support the vessel during campaigns, it would be necessary to create an entire carrier strike group. And this, American experience has shown, requires about fifteen escort and service ships, ensuring anti-aircraft and anti-submarine defense, logistical support, reconnaissance and other necessary measures. For this we can add another 100 billion rubles ($1.6 billion US).

And that's not mentioning expenditures on the ship's air wing, the expert recalled. If the Defense Ministry foregoes the existing carrier-based MiG-29Ks and Su-33s, fourth-gen planes which will be reaching obsolesce by the year 2030, this leaves the option of a carrier-based version of the fifth-gen T-50 PAK FA.

However, to convert the aircraft for naval use, "it's not enough to attach a hook, fit it with folding wings and reinforce its anti-corrosion protection. It will be necessary to seriously modify the plane's avionics, since naval aviation has its own specificities. It will also be necessary to revise the composition of weapons, in turn requiring changes to weapons control systems, and to bring the system's location and early warning systems up to Navy standards."

"That is, this should result in a new project called PAK PA," (a Prospective Airborne Complex of Carrier-based Aviation). And this, according to Tuchkov, would bring the cost up another 500 billion rubles ($8.4 billion) – taking account of the estimated 6 billion ruble apiece cost of a standard T-50, and the Shtorm's prospective complement of 80 fighter planes.

Furthermore, the analyst noted, it's necessary to take account of the cost of creating a special dock and coastal infrastructure to actually build the new ship, given the fact that such huge ships have yet to be built in Russia, with all the Soviet Union's aircraft carrier-building infrastructure currently rotting in the Ukrainian city of Nikolaev. Taking these expenses into account, plus any inevitable additional costs, the cost of the ship rises to 2 trillion rubles ($33.6 billion). For the record, Russia's total military budget for 2016 was to $69.2 billion.

"With this money, it's possible to build…80 nuclear submarines of the latest, 4th generation, at 25 billion rubles apiece. The benefits from them would be much greater than from one aircraft carrier," Tuchkov argued.

© Photo : Oleg Kuleshov
The nuclear-powered submarine Severodvinsk, the first of the Yasen-class of attack subs.
© Sputnik / Ilya Bogachev
Without the French Accent: Russia Creating an Amphibious Assault Ship Superior to Mistral
As far as the Shtorm was concerned, the expert stressed that it was only natural that Russian military enterprises are currently trying to attach themselves to this "financially grandiose project."

Nevertheless, even so far as aircraft-carrying surface ships were concerned, there are arguably much more cost-effective solutions available – including the prospective attack helicopter-carrying Priboy-class amphibious assault ship, another Krylov Center design. These vessels, expected to be delivered to the Navy by 2025, will be equipped with Ka-52 Katran attack helicopters, an option that's significantly more cost-effective than the options for US-style carrier aviation, even if their range and operational capabilities are admittedly more limited.

Ultimately, Tuchkov wrote that he remains hopeful that talk of the potentially "financially ruinous" Shtorm project would subside under the weight of all of its potential problems – first and foremost its gargantuan expense.

Why Militants in Syria Can't Shoot Down Russian UAVs