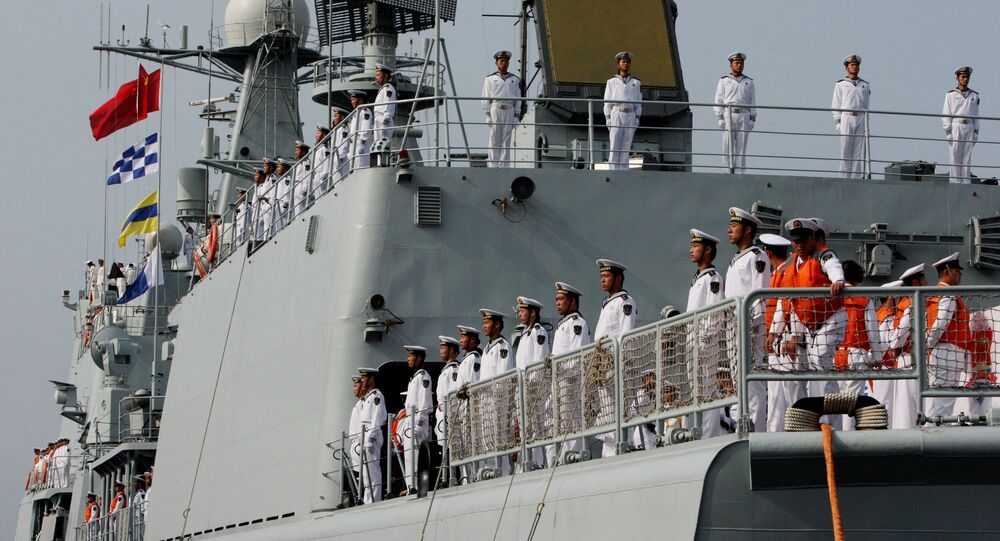 Next month's joint military exercises by Russia and China in the Baltic Sea are an important watershed in bilateral relations, military expert Vasiliy Kashin told Sputnik.

© AP Photo / Zha Chunming/Xinhua
Advanced Chinese Destroyer to Join Joint Naval Drill with Russia
On Monday, a fleet of Chinese naval ships left the port of Sanya in China's Hainan Province for the Baltic Sea, where they will carry out joint exercises with the Russian navy.

China's Type 052D destroyer, Changsha, the missile frigate Yuncheng and supply ship Luoma Lake will practice joint rescue efforts and protecting cargo vessels during the "Naval Interaction 2017" drills. The first phase will be held in the Baltic Sea in July, and the second in the Sea of Japan and Sea of Okhotsk in September.

"Chinese warships have visited the Baltics before. In October 2015, a similar group of Chinese ships (one 052C destroyer, one frigate, one transport ship), visited Poland on a five-day goodwill visit."

During last year's naval drills in the Far East, the two countries conducted search and rescue and defense operations such as defending anchored ships and releasing a captured vessel. They also practiced rocket and artillery strikes on naval and air targets.

In the final stage of the exercises, Russian and Chinese armed forces carried out a joint landing on a hypothetically captured island, using marines and air force paratroopers.

"In 2015, Russia and China also conducted naval exercises in two phases. However, that time the first stage of the exercises was held in the Eastern Mediterranean, which is somewhere all major powers have had a naval presence."

"This time, the exercises will be held in the Baltics, which is at the center of the current tensions between Russia and NATO. There are regular reports of military exercises, air interceptions and flights by reconnaissance aircraft."

"Since 2015, exercises held by Russia and China have come closer to potential 'hot spots' on the borders of the two countries. However, this process has occurred in parallel with the buildup by European allies of the US of their presence in Asia. In 2016, Britain and France took a much more active role in the Pacific Ocean and were critical of China's position with regard to disputes in the South China Sea," Kashin said.

© AFP 2020 / Greg WOOD
Why NATO's Increased Reconnaissance Activity 'Comes as No Surprise to Russia'
In December, the UK sent four of its Typhoon jet fighters to Japan to train with the Japanese Air Self-Defense Force. On their way back, the aircraft flew over the disputed South China Sea in an attempt to assert "freedom of navigation" rights there.

"In March 2017, France sent a Mistral-class assault ship to the western part of the Pacific for joint exercises with the United States, Japan and Britain. China was apparently not thrilled by European interference in disputes on the other side of the world, which played a role in the decision to send the Chinese fleet to the Baltic."

"It is important to note that China has a great ocean fleet which is designed to operate in remote areas of the world's oceans. The Chinese fleet is gradually mastering the Atlantic Ocean and exercises in the Baltics. Long voyages in the area will enable crews to become better acquainted with local conditions. It can be assumed that Chinese nuclear submarines are also going to appear in the wake of ships in the North Atlantic, which will liven up the naval situation even more," Kashin said.