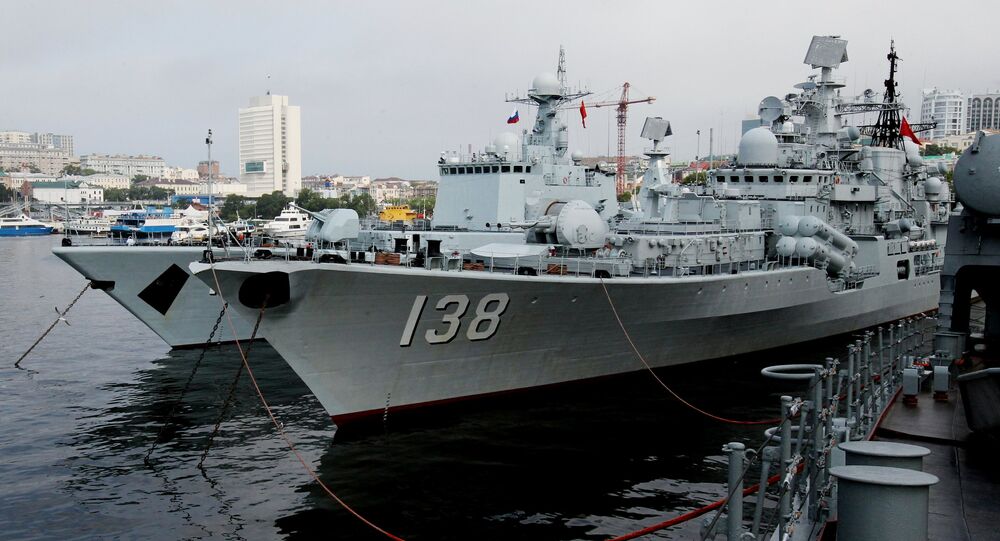 One of a Kind: Novelties of Sino-Russian Joint Naval Exercises

Russia and China have started the second phase of joint naval exercises from August 20-28 under the name of “Joint-Sea 2015 (II).”

The exercises will be held in Peter the Great Bay, near the Russian Far Eastern city of Vladivostok and in the Sea of Japan.

The main subject of the exercises will be “working out the joint protection of the sea and joint amphibious operations.” In light of the event there will also be open and vibrant cultural and sports activities to promote exchanges between the military vessels of the two countries.

© Photo : Press Service of the Russian Defense Ministry
What Do Russia-China Joint Naval Drills Really Mean?
Taking part in the drills from both sides are 23 warships, 2 submarines, 20 aircraft, 15 aircrafts, 8 helicopters, more than 400 marines and 40 armored vehicles.

This is the fourth joint naval drills between Russia and China. The drills “Joint-Sea 2015” have distinct features such as the fact that these drills will last for 10 days, making them the lengthiest exercises in the past 4 years.

© Sputnik / Vitaliy Belousov
Russian Troops Arrive in China for 'Unprecedented' Parade in Tiananmen Square
Another distinct feature of these drills is that the Chinese and Russian military will work for the first time on landing operations.

Moreover it is the first time that during the naval exercises, Chinese military units of surface-base, airborne troops, as well as the Chinese military aviation have traveled abroad altogether to take part in the event.

Five warplanes from a Chinese airfield crossed Russian airspace to fly to the area where the drills are taking place. This indicates a high degree of strategic mutual trust between the Chinese and Russian armed forces and simultaneously reflects specific joint operations during local wars.

Moscow and Beijing specifically stressed that the drills are not directed against other countries and aim to bolster "Chinese-Russian relations of comprehensive strategic interaction and partnership, deepen friendly military cooperation and strengthen combat capability to jointly confront threats in the sea," according to the Chinese Defense Ministry.