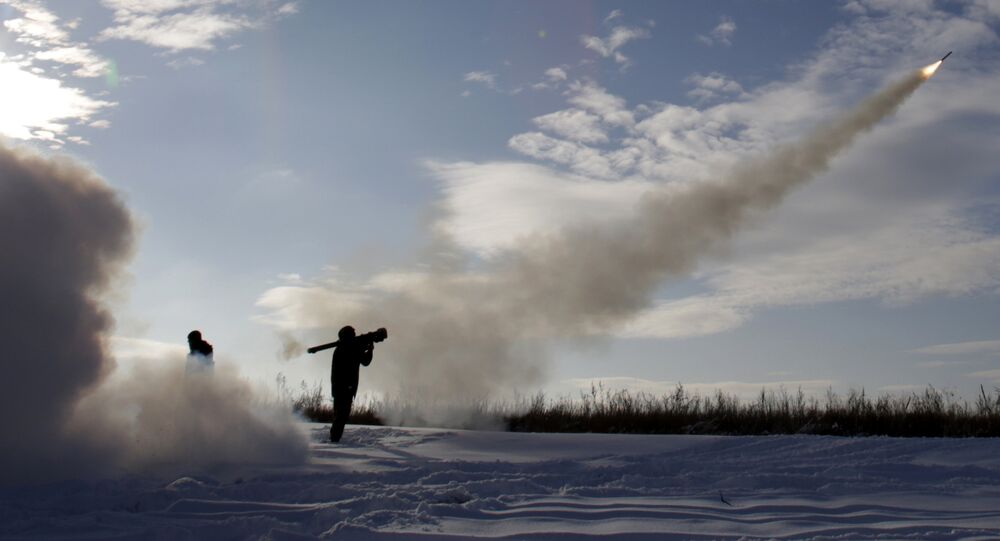 According to the Ministry, the drills included the use of aerosol maskirovka, concealed deployment, as well as joint movement of units over great distances. The press release highlighted that the units involved engaged in exercises during both day and night. The tactical exercises were held in intense conditions with the intensive use of simulated air targets.

© Sputnik / Kirill Kallinikov
Eagle Eye: Russia Restoring Its Early Missile Attack Warning System
This isn't the first time that Ukraine has held drills near the Russian border. In early December, the Ukrainian military held missile-firing exercises near Crimea, in violation of several international agreements. The Russian Defense Ministry summoned Ukraine's defense attaché in Moscow, serving him a note of protest regarding Kiev's illegal restriction of the use of airspace over the Black Sea during the drills. Kiev was forced to cancel the drills following a warning from Moscow that Russia could take steps to respond, up to and including shooting down any missile that crossed into the peninsula's airspace.

Russian concerns stemmed from the fact that Ukraine's military already has the unfortunate experience in accidentally shooting down civilian airliners. In 2001, a Ukrainian air defense S-200 missile battery shot down a Russian Tu-154 which was on route to Siberia from Israel over the Black Sea during a training exercise, killing all 78 passengers and crew onboard.

During December's drills, Moscow repeatedly called Kiev's missile launches in the Black Sea a 'provocation', and a threat to the safety of Russian civilian flights to Crimea. Russia informed the International Civil Aviation Organization, but so far has not received a response, Russian Transport Minister Maxim Sokolov told reporters Friday.

Ukraine's missile drills are just one component in a series of provocations against Russia and Crimea in recent weeks and months. In late November, Ukraine abducted two Russian servicemen. Two weeks before that, Russian security services caught several groups of saboteurs affiliated with Ukrainian military intelligence planning terrorist attacks on civilian and military infrastructure in Crimea, including the Russian Black Sea Fleet's home base in Sevastopol.

Before that, Kiev unofficially sanctioned a series of 'blockades' against Crimea, with ultranationalist 'activists' and Mejlis Tatar terrorists conducting water, food and energy blockades against the peninsula. The activists set up road blocks on roads to Crimea, blew up power lines, and even threatened to set up a 'naval blockade', which petered out after Russian border security warned that they would destroy any unsanctioned vessels in Russian territorial waters.

© Sputnik / Konstantin Chalabov
Going Out With a Bang: Here's Why Kiev Keeps Provoking Russia in Crimea
Amid the scandals, bewildered Russian observers and commentators suggested that the recent uptick in Kiev's provocations is connected to fears among its political elites that President-elect Trump could seek to de-escalate the conflict between Russia and the West over Ukraine. Another factor, analysts said, was the need to take ordinary Ukrainians' minds off the disastrous state of the country's economy.

The conflict between Russia and Western countries over Ukraine started in February 2014, when Ukraine's democratically elected president was overthrown in an EU and US-supported coup d'état, known as the Euromaidan Revolution. In March 2014, Crimean authorities, concerned by the expressly anti-Russian radicalism of the self-appointed authorities in Kiev, organized a referendum to determine the predominantly ethnically Russian peninsula's future status. 83% of voting-age Crimeans turned out for the referendum, with over 96% voting to break off from Ukraine and rejoin Russia. President Vladimir Putin and the Russian government agreed to Crimea's request to join the Russian Federation.