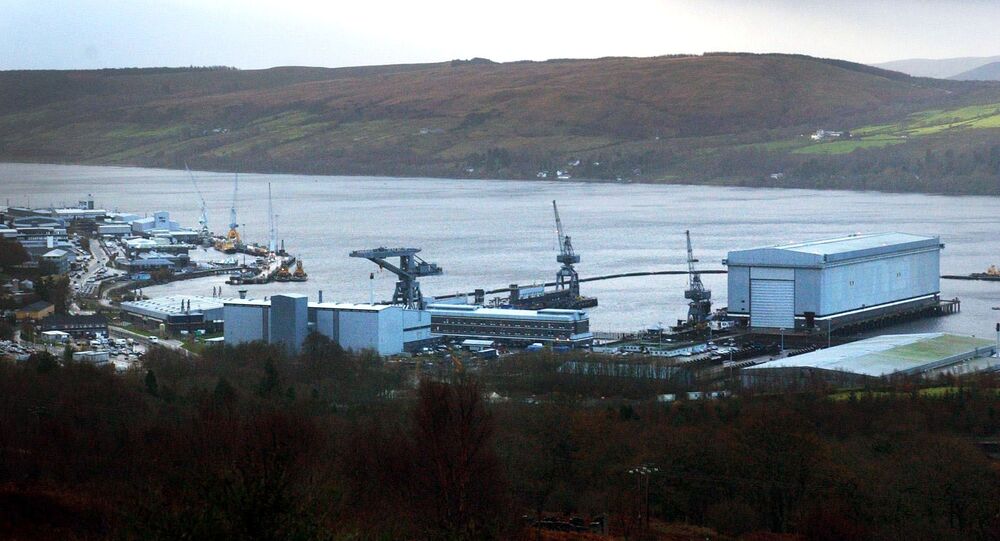 Commenting on the possible implications of the results of the Brexit referendum on Washington's military bases in the UK, former George W. Bush administration Under Secretary of Defense Dov S. Zakheim warned that the Pentagon will have to develop a 'Plan B' for its naval forces stationed in the country.

© Flickr / First Minister of Scotland
Scotland Agrees to Legislate for Second Independence Referendum
On Thursday, the United Kingdom held a referendum to determine whether or not the country should leave the EU. According to the final results, 51.9% of voters, or 17.4 million people, decided to support Brexit, while about 16.1 million opposed it. Total voter turnout was 72.2%.

Commenting on the referendum results from a military standpoint in a piece for The National Interest, Dov S. Zakheim, a former US official who served in the Defense Department in the Reagan and the George W. Bush administrations, warned that Brexit could have disastrous implications for US military interests, and should be taken very seriously.

The main problem, he suggested, was the threat of Scottish nationalism, and the impact another, successful referendum on independence from the UK might have on an important submarine base in that region.

In Zakheim's view, "there is no way of knowing what the economic ramifications of Brexit might ultimately turn out to be" at this point, given legal uncertainties and unknowns over the actual terms of withdrawal. However, "there is…a more immediate national security concern arising out of the Brexit vote, with ramifications for Britain, NATO and the United States."

That concern, the former official wrote, has to do with the fact that the independence-seeking Scottish National Party, "which both supports membership in the EU and opposes NATO membership, may well seek a new referendum prior to the completion of British negotiations with Brussels."

Ultimately, "should a referendum be held, and Scotland vote to leave the United Kingdom, the submarine base at Faslane may no longer be available to the Royal Navy, while the United States would find that it no longer would have access on an emergency basis to Faslane."

© AFP 2020 / MAURICE MCDONALD
A trident submarine at the Faslane Naval Base, Scotland, United Kingdom (file photo)
© Sputnik /
60% of Scots Would Vote for Scottish Independence Amid Brexit Results
A poll conducted for the Sunday Post revealed that nearly 60% of Scots would vote for independence from the United Kingdom if another referendum were held following Thursday's Brexit results.

In such a scenario, Zakheim noted, London would have to search for a new submarine base, "which could be a costly endeavor that could undermine other British defense programs, unless the cost of construction of a new base, for example at Devonport, is offset by the net savings for Westminster from breaking with Scotland."

At the same time, as far as the United States is concerned, the analyst warned that "until such a new base is completed, if construction is undertaken in the first place, Washington could no longer assume that, if needed, the US Navy could operate out of Faslane, as it did from the base at Holy Loch until 1992, when the Cold War was no more."

In Zakheim's view, with the "reemergence of an aggressive Russia, and the renewed importance of what during the Cold War was termed the Greenland-Iceland-UK Gap, which ran through Scotland, the inability to operate from Faslane would be a major cause for concern for Washington, London and, more generally, NATO."

As expected, the official didn't get into the details of Russia's so-called 'aggression', or mention the fact that it was Brussels and Washington, not Moscow, which initiated the political crisis in Ukraine, and NATO, not Russia, which is now building up its forces on Russia's borders.

© REUTERS / Ints Kalnins
The New Cold War - NATO Plans 40k Force, Bases on Russia's Border
In any case, hope (for Washington and for NATO) remains, according to the analyst. "Indeed, the Scots have said they would not insist that Britain depart from Faslane until 2020. Washington and London therefore have some time to consider how to mitigate the potential impact of Scottish independence on their common force posture."

In this case, Zakheim suggested, "one possibility could be the basing of British Tridents at King's Bay, Georgia, which houses the Atlantic Fleet's Trident Force. Doing so would facilitate the redeployment of additional American Tridents to the Third Fleet on the West Coast, as part of the much-heralded pivot to Asia," (effectively an attempt to surround an emerging China in the East and South China seas).

At the same time, the former official noted, Washington could attempt to buy off the Scots, in the event of a successful independence vote.

"Another possibility would be to pay the Scots for both British and American use of Faslane, much as Washington pays for some of its overseas bases elsewhere in the world." The sweeteners for Edinburgh, Zakheim argued, include low oil prices (Scotland is an oil-producing region), the loss of English subsidies, and the overall "negative economic impact of Scottish independence."

Ultimately, the analyst emphasized, "it is critical that the Pentagon and the [UK's] Ministry of Defense quickly begin the process of developing a Plan B for their respective forces should Scotland actually secede from the United Kingdom…Defense planners should recognize that for too long, policymakers in Brussels and London buried their heads in the sand regarding Brexit, assuming incorrectly that, at the end of the day, the British public would never vote to leave the European Union. The pundits and the polls validated those assumptions, and both were wrong."

© AP Photo / Dmitry Lovetsky
Super Stealthy: New-Look Russian Nuclear Sub to Join Pacific Fleet
In this vein, he added, "British and American military planners and their civilian overlords should [now] take heed of that reality when considering whether to believe those pundits and pollsters who will assert that Scotland could 'never' leave the United Kingdom."

Painting this apocalyptic picture, the analyst didn't go into just how many military bases all around the globe Washington actually needs to ensure its national security interests.

Head of Scottish Gov't to Approach EU, But Doesn't Want Border With England

60% of Scots Would Vote for Scottish Independence Amid Brexit Results

Okinawans Finally Snap After Decades of US Military Depravity

Trump's No Fool: Hillary's American Empire is the Real Danger