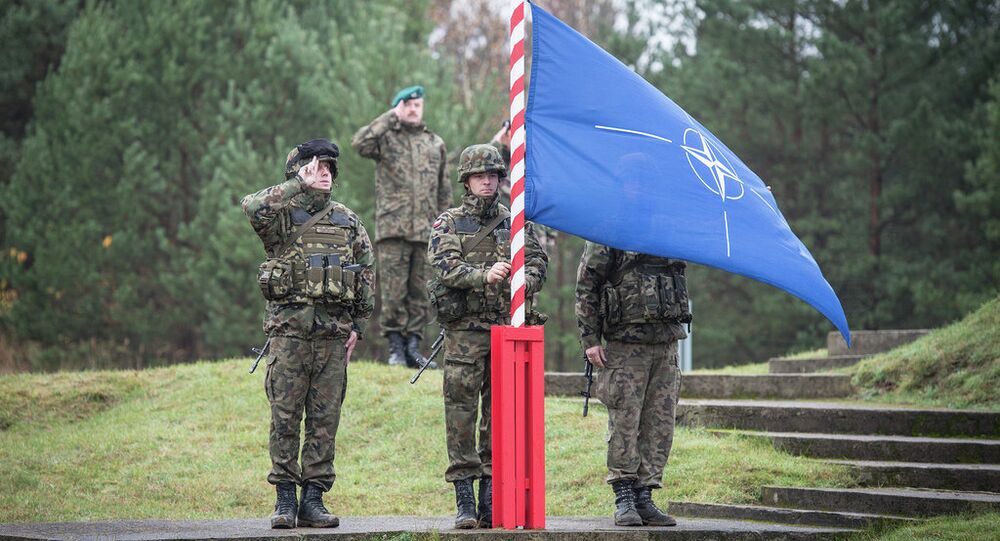 Despite the Pentagon's announcement that it has plans to quadruple its spending in Europe to contain an 'aggressive' Russia, Poland won't be getting new permanent NATO bases, according to US Deputy Ambassador to Poland John C. Law.

On Tuesday, US Defense Secretary Ashton Carter rolled out the Pentagon's plans for its 2017 budget, outlining $583 billion in spending. The budget proposes the quadrupling of US military spending for Europe from its current $789 million to $3.4 billion.

For its part, Polish media reacted to the announcement with the hope that Washington had made up its mind on stationing additional forces and equipment in Europe, and specifically, on the construction of new permanent NATO bases in Poland.

© Flickr / U.S. Army Europe Images
Pentagon's European Spending Spree: The Real Deal or Just Blowing Smoke?
Late last month, during a visit to NATO headquarters in Brussels, President Andrzej Duda said that he wanted to see "as permanent a presence as possible," so that the "potential attacker" knows that any attack on NATO member states would be a futile venture.

But the US has been looking to avoid further aggravating tensions with Moscow. For now, Washington continues to recognize that new NATO bases in Eastern Europe, including Poland, would be a breach of the 1997 NATO-Russia Founding Act, which prohibits the permanent stationing of 'significant forces' in former Warsaw Pact states.

On Wednesday, in an interview for Polish radio station RMF 24, John C. Law, the US Deputy Chief of Mission to Poland, reiterated that unfortunately for Warsaw, the Pentagon's planned spending increases do not mean that the US will be building new bases in Poland.

"It's not about the lack of will to ensure equal security for all; it's about the belief that there are other, more effective ways to ensure this security," the official said, responding to his interviewer's question about whether the new spending was a sign that Washington had decided to change course ahead of this summer's upcoming NATO summit.

Assuring listeners that Poland would get its fair share of the security to be provided by the Pentagon's spending spree, Law noted that the money would go to improving existing NATO infrastructure in the area, including the Lask Airbase in central Poland, where a detachment of US Air Force units has been permanently based since 2012. For instance, the deputy ambassador noted, the base's runway may be upgraded to accommodate more planes.

© CC BY 2.0 / USAFE AFAFRICA
US personnel at the Lask Air Base, Central Poland.
© AFP 2021 / US NAVY
Self-Defense, Huh? Poland Expects to Implement Missile Defense Agreement With US in 2016
"Secondly, funds are allocated for additional military exercises. Some people think that exercises are only symbolic, but they would be mistaken. They are not just symbolic, and will make our countries' armies work better as a team."

"The third area concerns the better distribution of the equipment needed for these exercises. The president mentioned yesterday that the equipment and supplies should be arranged closer to the areas where they would be needed in case of conflict…This would give us the opportunity to respond quickly, which is one of the components of the commitments we made during the [2014] NATO summit in Wales."

With his interviewer complaining that permanent bases would also have a symbolic importance for Poland, indicating "a kind of break from its status as a second-class member of the NATO alliance," Law responded by pointing out that today, as far as Washington is concerned, the strategic situation differs from the one which existed in the 1950s or 1960s, and that large permanent bases no longer make sense.

In this situation, Law said, "we believe that the best potential for deterrence is a rapid response capacity to provide quick, skillful, fast-moving forces wherever they are needed. Two weeks ago, without prior notice, we moved an American battalion equipped with Patriot missiles to western Poland to conduct exercises with Polish troops. This, in my opinion, is the best example of this capability to act quickly and transfer the necessary equipment."

Ultimately, the deputy ambassador noted, "one of the most important things that we must reaffirm in Warsaw, at the symbolic first summit in an Eastern European NATO state, is that we are following up on the direction taken at the Newport summit – in the direction of building such [rapid response] capabilities."

Understanding the Pentagon's Plans to Quadruple Its European Defense Budget

Poland Expects to Implement Missile Defense Agreement With US in 2016