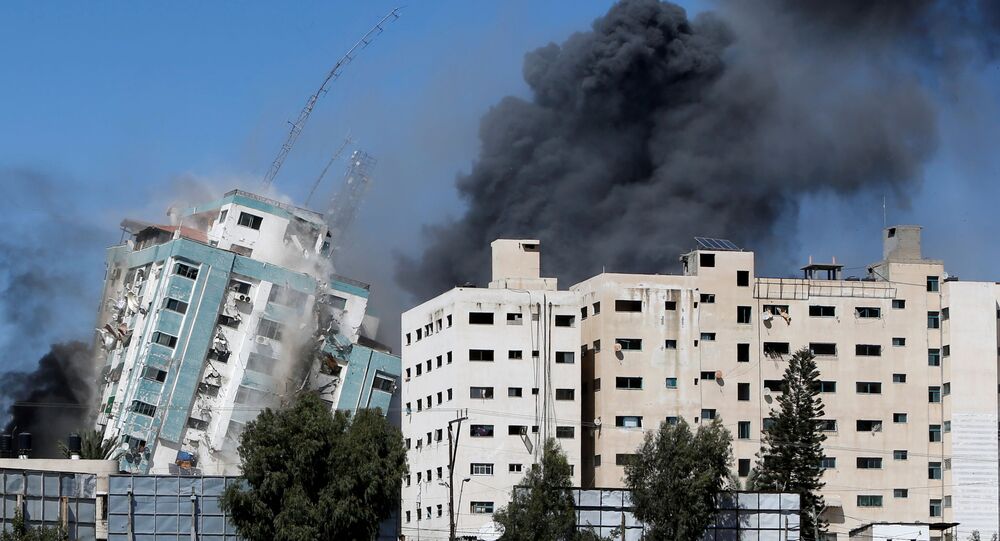 MOSCOW (Sputnik) - The International Federation of Journalists (IFJ) has demanded urgent action from the UN Security Council to stop the attacks on journalists in the Gaza Strip.

As armed hostilities between Israel and Palestine's Hamas continued throughout the week, among the buildings destroyed in Gaza by Israeli rockets was a high-rise that housed the offices of international media agencies, including The Associated Press and Al Jazeera.

"The International Federation of Journalists has called on the UN Security Council, which meets today, to take urgent action to stop the deliberate and systematic targeting of journalists in Gaza," the organization said on Sunday.

The purpose of attacking journalists was to "silence those reporting from on the ground in Gaza," the IFJ believes.

IFJ General Secretary Anthony Bellanger accused Israel of breaching its obligations under UN Security Council Resolution 1738, which requires that states provide protection to journalists in conflict environments. Meanwhile, more than 30 media workers have been attacked or detained in the Gaza Strip and internet services were blocked, according to the IFJ statement.

"This outrageous targeting of media must stop," Bellanger said as quoted in the release.

The organization said it has repeatedly asked the Israeli authorities to properly investigate attacks and targeted killings of Palestinian journalists, stressing that impunity will likely lead to more attacks in the future both in Israel and in Palestine.

© AFP 2021 / MOHAMMED ABED
A Palestinian man takes a photograph with his mobile phone of a building hit and destroyed during an Israeli Air strike in Gaza City, on May 15, 2021.

The Reporters Without Borders (RSF) non-governmental organization has also drawn attention to the targeting of media amid the Israel-Gaza hostilities. On Sunday, RSF called on International Criminal Court chief prosecutor Fatou Bensouda to include Israeli airstrikes on more than 20 media outlets in the Gaza Strip in her investigation into the situation in the West Bank and Gaza Strip.

"By intentionally destroying media outlets, the Israel Defence Forces are not only inflicting unacceptable material damage on news operations. They are also, more broadly, obstructing media coverage of a conflict that directly affects the civilian population. We call on the International Criminal Court’s prosecutor to determine whether these airstrikes constitute war crimes," RSF secretary-general Christophe Deloire said in a Sunday statement.

An emergency UN Security Council meeting was held on Sunday to discuss the ongoing hostilities between Israel and the Gaza Strip. Most of the countries participating in the virtual meeting were urging both sides to agree to a ceasefire.

The current escalation of the Israeli-Palestinian conflict started earlier this month, when unrest began in East Jerusalem over an Israeli court's decision to evict several Palestinian families from the area. The situation on the border between Israel and the Palestinian Gaza Strip has been deteriorating for the past week amid heavy rocket exchanges that have resulted in the death of nearly 200 Palestinians, including 58 children. Israel has reported 10 people killed and 50 others seriously injured, while the Palestinian Red Crescent says that more than 1,300 Palestinians have been injured amid tensions with Israel.