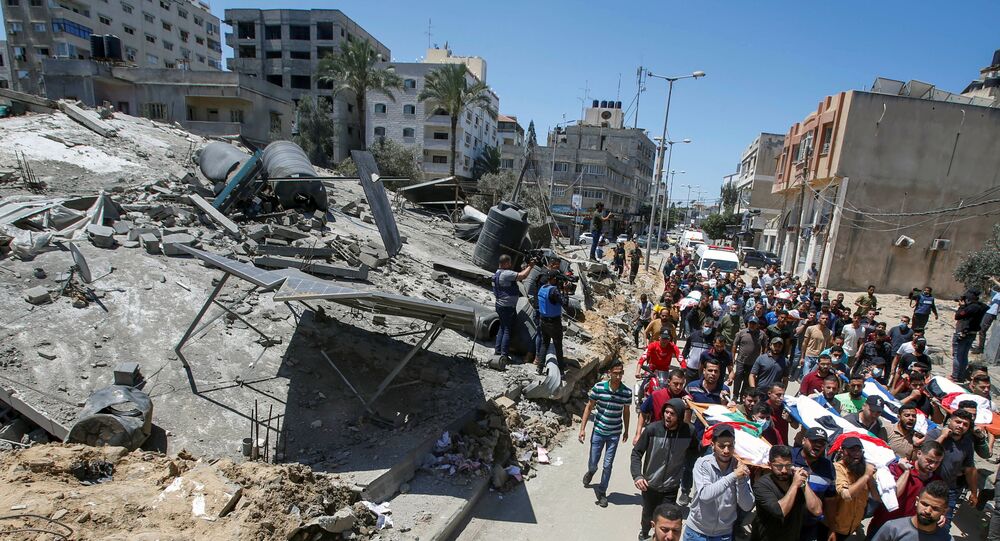 GAZA (Sputnik) - Power supply was cut off in Gaza City, the largest city in Palestine, as a result of Israeli strikes against the Gaza Strip, a source told Sputnik.

"The Israeli Air Force simultaneously launched a series of rocket attacks on the Gaza Strip, the cities of Gaza - Khan Yunis, the northern area, and Rafah; electricity was cut off in the city of Gaza amid the strikes," the source said.

There have been reports of the main office of the Hamas political bureau having been destroyed in Gaza, but this information has not been officially confirmed.

The Israeli strikes came after the resumption of rocket attacks from the Gaza Strip on the night from Saturday to Sunday.

Pictures of the destruction caused by the recent Israeli raids on the Rimal neighborhood of Gaza City pic.twitter.com/yH5xsfbyDb

People are screaming under the rubbles! #Gaza pic.twitter.com/FtklGWIMj3

A Palestinian family consisting of a man, a woman and 5 children are still under the rubble of their house after the bombing of Abu Al-Awf building on Al-Wehda Street in #Gaza City.#GazaUnderAttack #GenociedinGaza #GenocideInGaza pic.twitter.com/VFOkJ5Kxc4

According to Sputnik's sources, the Israeli forces targeted a high-rise building in Gaza on Saturday, after warning its residents in advance. Earlier, the Israel Defense Forces (IDF) said they had struck a 15-story building that housed a number of international media such as the Associated Press and Al-Jazeera. The IDF said the building was used by Hamas as their intelligence headquarters, among other things. The Israeli forces said sufficient time was given to people to leave the building before the attack.

BREAKING: The terrorist attacks from the Israeli government continue as an Israeli air raid bombs the offices of The Associated Press and Al Jazeera in Gaza City. #GazaUnderAttack #FreePalestine pic.twitter.com/C2ZE695EO6

On Saturday evening, the military wing of Palestine's Hamas, the Qassam Brigades, announced that the movement was going to stop airstrikes against Israel's Tel Aviv for two hours starting from 10 p.m. local time on Saturday (19:00 GMT).

The Qassam Brigades said after midnight that it had resumed strikes, launching rockets in the direction of Israel's Ashkelon, Ashdod and Beersheba, in response to the Israeli forces having destroyed residential buildings in the Gaza Strip.

The Israel Defense Forces (IDF) said on Twitter shortly after midnight that multiple rockets were fired from the Gaza Strip into Israel.