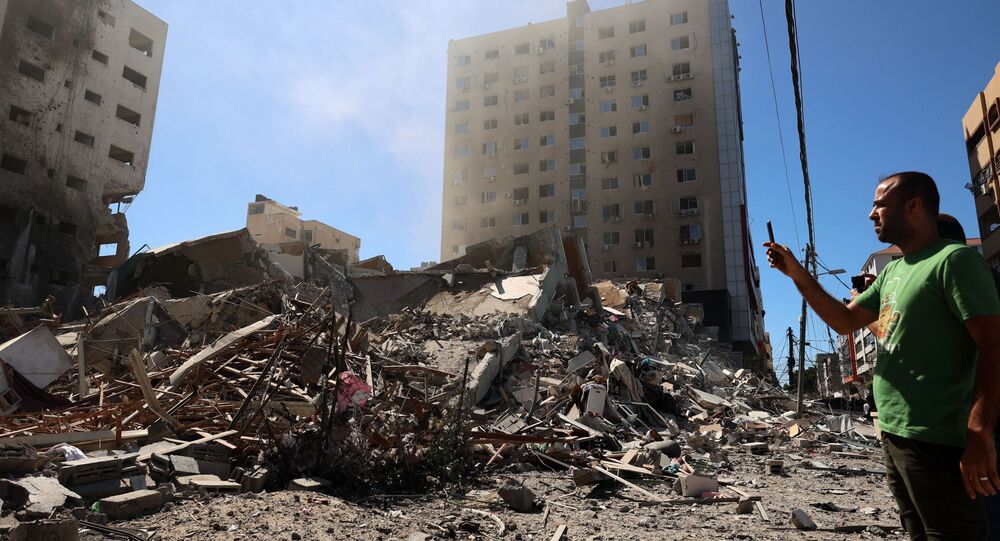 Amid unabated Israeli-Palestinian violence, US President Joe Biden, speaking with Prime Minister Benjamin Netanyahu on Sunday, “reaffirmed his strong support for Israel” to defend itself while also raising “concerns about the safety and security of journalists” as strikes destroyed a Gaza building used by international media outlets.

Despite public statements by Prime Minister Benjamin Netanyahu on Saturday that strikes targeting Gaza will continue “as long as necessary”, and warnings issued to Hamas that “it’s not over yet”, Israeli officials indicated on Sunday that a ceasefire might be in the pipeline, reported Jewish news site Walla.

Speaking ahead of Sunday’s security cabinet meeting, senior Israeli officials were cited as acknowledging that in response to growing international pressure, calls were being heard to start moving toward a ceasefire with Hamas and the Palestinian Islamic Jihad.

On Saturday, senior defence officials were reportedly urging Prime Minister Benjamin Netanyahu and Defence Minister Benny Gantz to start working toward a ceasefire. An end to the IDF operation was sought based on the understanding that the military had met most of its goals since the start of the operation on 10 May.

The anonymous officials added that other considerations prompting the shift in stance were the growing international pressure for an end to the violence and the deteriorating humanitarian situation in Gaza.

© AFP 2021 / MAHMUD HAMS
A thick column of smoke rises from the Jala Tower as it is destroyed in an Israeli airstrike in Gaza city controlled by the Palestinian Hamas movement, on May 15, 2021.

It was also reportedly added that as with previous agreements between Israel and the Gaza groups, the ceasefire would be mediated by Egypt.

While the security cabinet was expected to chiefly focus on updates and review the progress of the operation so far, it was added, according to the outlet, that one issue which is on the agenda is Israel altering its position on Egyptian proposals to open ceasefire talks.

An expansion of the operation would mean more ground operations in Gaza, says the report, which is a turn of events that very few within the Israeli government want, if any. Therefore, senior Israeli officials were suggested as considering indicating to Egyptian mediators that if Hamas has a ceasefire proposal, Israel is willing to listen.

A flurry of diplomatic activity has so far failed to achieve any breakthrough, with envoys from the US, UN and Egypt working to restore calm in the Middle East amid the spiralling violence. The UN Security Council was due to hold an emergency meeting later on Sunday to discuss the worst outbreak of violence in the region in years.

On Saturday, after issuing a warning to occupants to leave, an Israeli airstrike resulted in the collapse of a tower in Gaza City that housed offices of The Associated Press, Al Jazeera and other media outlets.

The IDF claimed that Hamas had been using offices of the press outlets in the tower “as human shields”.

We warned civilians in the building about our strike out of concern for their safety & gave them enough time to safely evacuate.

Hamas & Islamic Jihad used this time to take items out of the building. We were willing to pay that price to not harm any civilians.

​US President Joe Biden weighed in on the developments as he spoke to Israeli Prime Minister Benjamin Netanyahu and Palestinian Authority President Mahmoud Abbas on Saturday.

Today the President spoke with Israeli Prime Minister Netanyahu, reaffirmed his strong support for Israel’s right to defend itself against rocket attacks from Hamas and other terrorist groups in Gaza, and condemned these indiscriminate attacks against Israel. pic.twitter.com/baHWh1b6Q2

During his call with Netanyahu, Biden reiterated support for Israel’s right to self-defence against rocket attacks from the militant group Hamas in Gaza, according to a readout released by the White House.
However, he “raised concerns about the safety and security” of journalists.

"The president noted that this current period of conflict has tragically claimed the lives of Israeli and Palestinian civilians, including children. He raised concerns about the safety and security of journalists and reinforced the need to ensure their protection,” said a statement issued by the White House.

US Defense Secretary Lloyd Austin spoke with Defence Minister Benny Gantz to share “his view on the need to restore calm,” according to an US statement.

UN Secretary General António Guterres emphasised that “all sides that any indiscriminate targeting of civilian and media structures violates international law and must be avoided at all costs”, UN spokesperson Stephane Dujarric said in a statement on Saturday.

Since the conflagration erupted on 10 May, according to the latest reports, about 2,900 rockets have been fired from the Gaza Strip into Israeli territory.

​The number of Palestinians killed in Israeli airstrikes on the Gaza Strip has risen to 174, including 47 children, according to information released by the enclave's health ministry on Sunday.

Meanwhile, ten people died, about 50 suffered serious injuries and hundreds were injured in Israel in the recent violence, stated Maj. Gen. Ori Gordin, the head of the Home Front Command.

The escalation of the Israeli-Palestinian conflict started earlier this month, amid brewing unrest in East Jerusalem over an Israeli court's decision to evict several Palestinian families from the Sheikh Jarrah neighbourhood. Tensions further flared over a decision by Israel to restrict access to the Al-Aqsa mosque compound on the Temple Mount, one of the three most holy sites in Islam, at the start of the Islamic month of Ramadan.