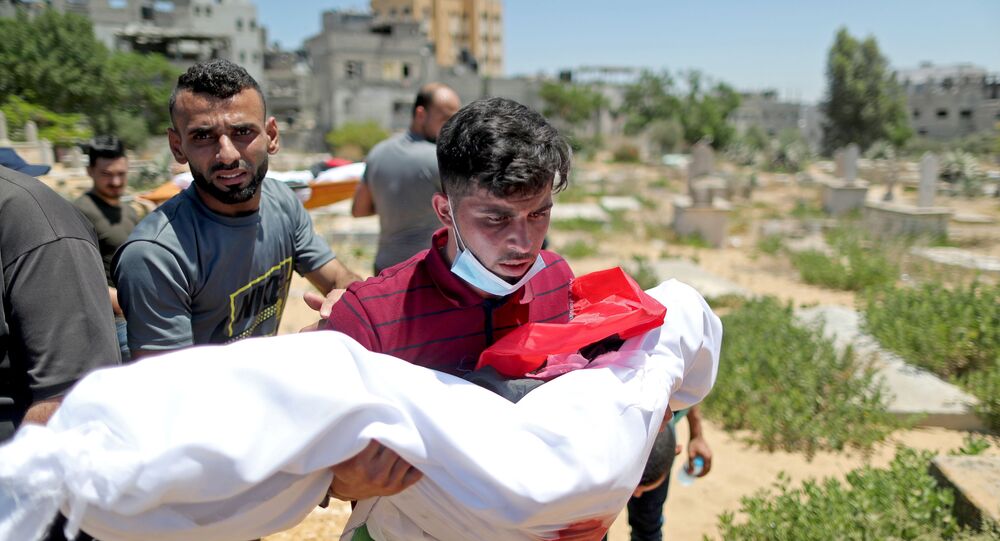 MOSCOW (Sputnik) - UN Secretary-General Antonio Guterres is "deeply disturbed" by the destruction of a high-rise building in Gaza City and the overall increase in the number of civilian casualties from the rocket attacks, his spokesman Stephane Dujarric said.

"The Secretary-General is dismayed by the increasing number of civilian casualties, including the death of ten members of the same family, including children, as a result of an Israeli airstrike last night in the al-Shati camp in Gaza, purportedly aimed at a Hamas leader," Dujarric said in a written response to questions on the Israeli airstrikes in Gaza, quoted by France 24 on Sunday.

© REUTERS / MOHAMMED SALEM
Israeli Forces Launch More Attacks, Causing Power Shutdown in Gaza City, Source Says
Earlier, a local source told Sputnik that the power supply was cut off in Gaza City, the largest city in Palestinian Authority, as a result of Israeli strikes. The source said that Israeli forces had launched a series of rocket attacks on several cities in the Gaza Strip, including Khan Yunis and Rafah. The Israeli strikes came after the resumption of rocket attacks from the Gaza Strip on the night from Saturday to Sunday.

According to Sputnik sources, the Israeli forces targeted a high-rise building in Gaza on Saturday, after warning its residents in advance. Earlier, the Israel Defense Forces (IDF) said they had struck a 15-story building that housed a number of international media such as the Associated Press and Al-Jazeera. The IDF said the building was used by Hamas as their intelligence headquarters, among other things. The Israeli forces said sufficient time was given to people to leave the building before the attack.

According to his spokesman, the UN Secretary General was "deeply disturbed by the destruction by an Israeli airstrike today of a high-rise building in Gaza City that housed the offices of several international media organizations as well as residential apartments."

© AFP 2021 / MOHAMMED ABED
A Palestinian man takes a photograph with his mobile phone of a building hit and destroyed during an Israeli Air strike in Gaza City, on May 15, 2021.

On Saturday evening, the military wing of Palestinian Hamas, the Qassam Brigades, announced that the movement was going to stop airstrikes for two hours starting from 10 pm local time on Saturday (19:00 GMT).

The Qassam Brigades said after midnight that it had resumed strikes, launching rockets in the direction of Israel's Ashkelon, Ashdod and Beersheba, in response to the Israeli forces having destroyed residential buildings in the Gaza Strip.

The IDF said on Twitter shortly after midnight that multiple rockets were fired from the Gaza Strip into Israel.

The Israeli army said on Saturday that more than of 2,500 rockets had been fired toward Israel from Gaza in the past days, with 430 of the projectiles having fallen within the Gaza Strip. The Israeli military says it has launched strikes against over 672 military targets in the Gaza Strip.