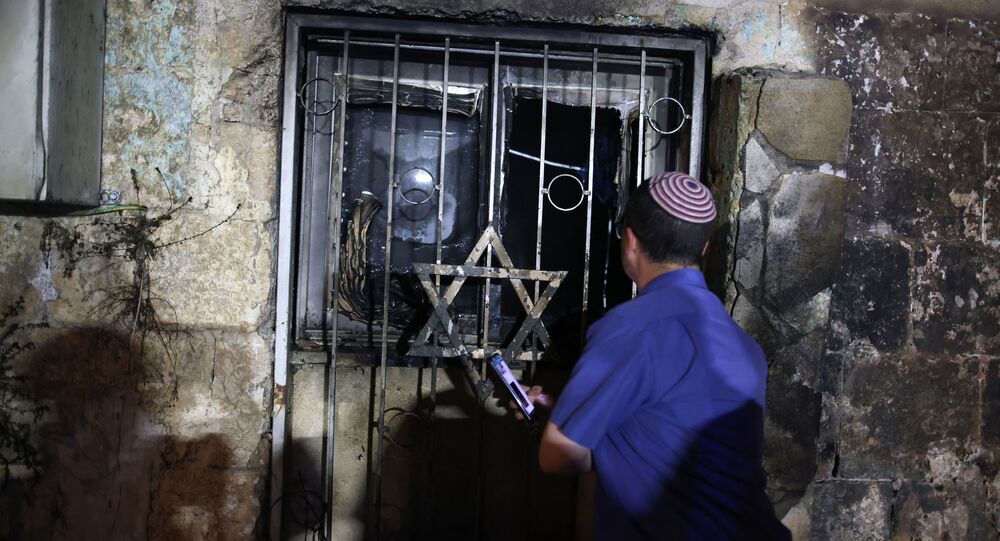 Israel and Gaza descended into the worst violence in years this week after a month of Palestinian protests-turned violent over the government’s move to restrict their ability to visit holy sites in Jerusalem for Ramadan, the delay of Palestinian Authority elections, and court rulings to evict Palestinian families from Jerusalem’s east.

A synagogue in the central Israeli city of Lod has been torched amid the spate of Jewish-Arab violence which has befallen much of the country.

Amateur footage of the aftermath of the destruction was filmed by a local resident and aired by Israel’s Channel 7, with the synagogue’s stone walls seen charred with black smoke, and much of the interior trashed. The synagogue is reportedly the fourth one in Lod city to have been attacked and torched.

Earlier Friday, Israeli border police reported that they had arrested 43 people overnight for disturbing order in Lod – where a state of emergency was declared this week amid violent clashes between Jewish and Palestinian Israelis. Most of the arrested were Arab Israelis, police said.

Police said in a statement that they would remain deployed in Lod over the weekend in a bid to “return order”.

Situated about 15 km southeast of Tel Aviv, Lod is home to about 77,000 people, 30 percent of them Arab Israelis. Before the formation of Israel in 1948 and the arrival of waves of Jewish immigrants, the majority of the city’s residents were Arabs.

© REUTERS / MOHAMMED SALEM
Gaza to Run Out of Fuel for Electricity Generators on Sunday, Israeli Official Says
The Netanyahu government used Israel's emergency powers for the first time since 1966 and the end of Israeli military administration over its Arab minority communities to declare a state of emergency in Lod on Tuesday following a meeting of top security and legal officials. Local security was beefed up using battalions of border police ordinarily assigned to the West Bank territories, with the state of emergency including a curfew.

Similar clashes have broken out between Arabs and Jews across other cities, with the prime minister vowing to stop the violence.

Violence in Israel proper also escalated into a military confrontation between the Israeli military and Palestinian militant groups in Gaza, with the militants firing hundreds of rockets into Israel, and Tel Aviv responding via massed airstrikes. As of Friday, 113 civilians and between 20 and 90 militants were killed in Gaza, six Palestinians died in East Jerusalem and the West Bank, and eight Israeli Jewish civilians perished across Israel.

On Friday, the Israeli military walked back earlier reports that Israeli troops had crossed into Gaza, and said that its operations were limited to air attacks on targets inside the isolated enclave.

© REUTERS / Ammar Awad
Jerusalem Protests Explained: Roots of the Ongoing Violence
This week’s violence in Israel and Gaza followed nearly a month of escalating tensions in Jerusalem over Israeli authorities’ 12 April decision to put up barriers around Al-Aqsa Mosque – one of the holiest sites of Islam, ahead of the Ramadan holiday, while leaving access to Jewish holy sites unobstructed. Tensions were ramped up further after Israel’s Supreme Court ruled to evict Palestinian families from their homes in an east Jerusalem neighbourhood.
...
Reddit
Google+
Blogger
Pinterest
StumbleUpon
Telegram
WhatsApp
346