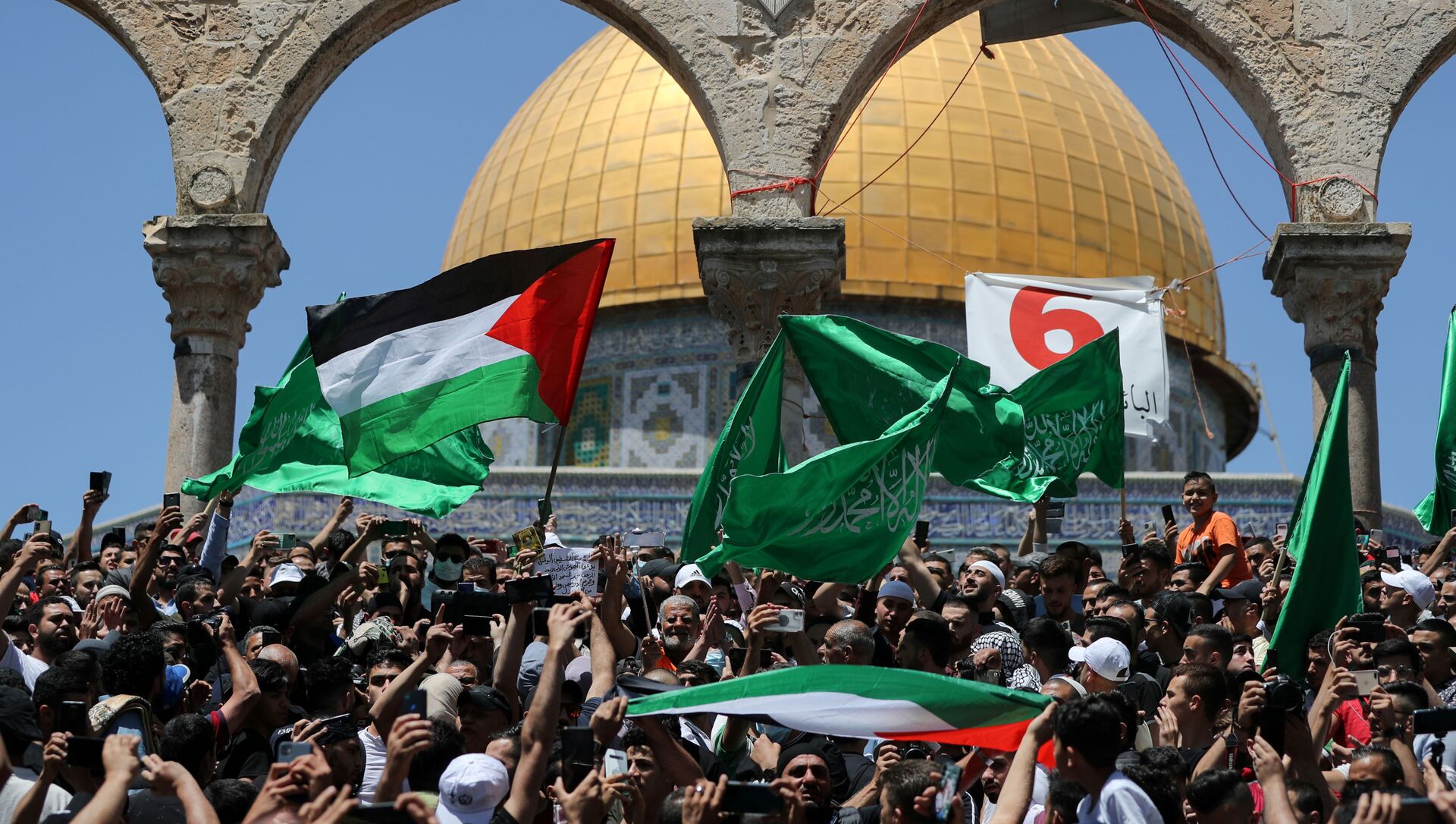 Tim Korso
All materials
Hundreds of Palestinians and 17 Israeli policemen were injured in the latest round of violence in Jerusalem on 7 May. The Friday clashes are the biggest so far in the string of violence that was sparked by recent events and the lasting legal woes between Palestinians and Israelis.

Palestinians have been protesting in Jerusalem (and beyond) for nearly a month now in what might become one of the biggest demonstrations against Israeli authorities since the year-long 2018 Great March of at the Gaza-Israeli border.

Unlike the Great March of Return, due to lasting issues that perpetuated the Israeli-Palestinian conflict, the clashes in Jerusalem were sparked by a combination of recent actions by the city's officials and legal battles that have relented for nearly five decades now. Here's how the latest spate of violence started in the Holy City and why it's been rumbling on for nearly a month.

Ramadan is one of the most important events in the Muslim calendar. In Jerusalem, during the month-long fasting and prayers, Muslims often visit Damascus Gate Plaza and the Al-Aqsa Mosque. However, this year they were denied this right. At the beginning of Ramadan on 12 April, Israel Police put up barriers around Damascus Gate Plaza preventing anyone from visiting the site. The police claimed that the barriers were not meant to restrict access to the plaza but to instead improve the flow of pedestrians into the Old City. 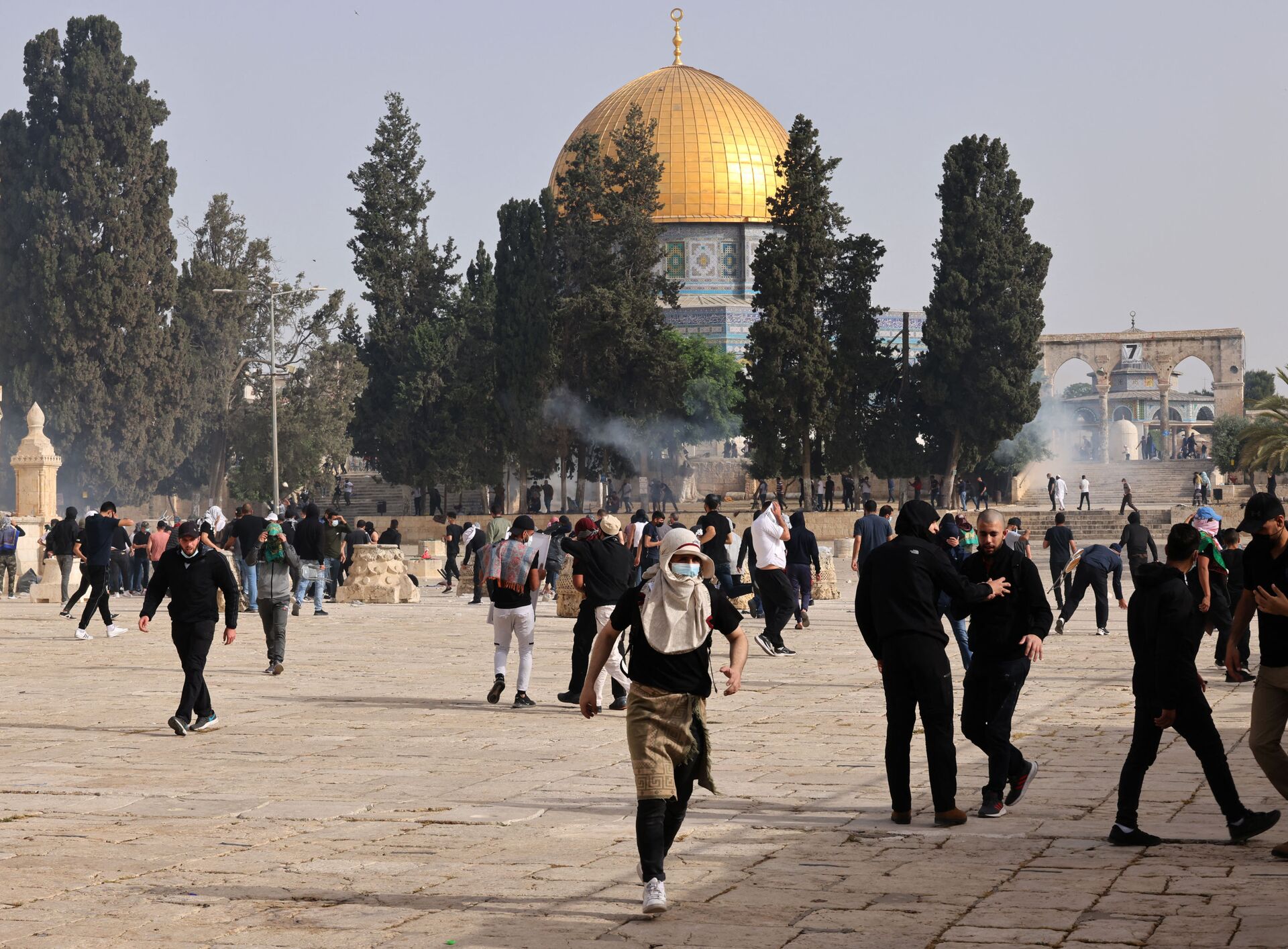 Palestinians run for cover from tear gas fired by Israeli security forces at Jerusalem's Al-Aqsa mosque compound on May 10, 2021, ahead of a planned march to commemorate Israel's takeover of Jerusalem in the 1967 Six-Day War.
© AFP 2022 / Aahmad Gharabli

The decision was not taken well by Palestinians living in Jerusalem: they thought the Israeli authorities were trying to humiliate them, especially as Haredi Jews were given unimpeded access to their holy sites in April despite the country's coronavirus restrictions. Hundreds of Palestinians gathered to protest the decision only to be dispersed by police using water cannons and stun grenades. A subsequent decision by Jerusalem authorities to limit the number of worshippers in one of the key Muslim mosques in Jerusalem, Al-Aqsa, to 10,000 people due to the ongoing pandemic only poured fuel on the flames.

On 25 April, Israeli Police chief Kobi Shabtai lifted some of the restrictions, such as removing the barriers from the Damascus Gate Plaza, but by that time the Palestinian protests in Jerusalem were already being fuelled by other issues: Tel-Aviv's purported role in delaying the much-anticipated Palestinian Authority general election, for example.

Since the creation of the state of Israel and the eviction of Palestinian families from the new country, the east Jerusalem neighbourhood of Sheikh Jarrah has been home to 28 Palestinian families, who had to abandon their previous settlements, since 1956. Their settlement there was supposed to be organised by the Jordanian government, which controlled the West Bank at the time, jointly with the UN.

However, the two failed to finalise the process of registering the Palestinians' rights for the land by 1967, when Tel Aviv seized control over east Jerusalem. Jordan said it transferred all the documents, which confirmed the families' claims to the land, to the Palestinian Authority. However, this did not prevent Tel Aviv from assigning ownership over the Sheikh Jarrah lands to the Israeli settlement associations.

The Palestinian families who live there have been waging a legal war to prove their ownership of the neighbourhood since the 1970s with mixed results as several groups of Jewish settlers tried to claim the lands for themselves via courts. The current Sheikh Jarrah Palestinian inhabitants have been facing eviction lawsuits since 1982, and over a dozen Palestinian families have either already been evicted or received eviction notices. However, four of them filed an appeal with Israel's Supreme Court in a final attempt to defend their right to stay in east Jerusalem.

The Supreme Court is set to issue a ruling on the case on 10 May, although prominent Israeli politicians have already urged to postpone the decision in the hope of reducing tensions in Jerusalem. It's unclear so far what side the Supreme Court will take, but the possibility of dozens of Palestinian families being evicted from their homes, where they lived for nearly a century, has perpetuated the protests in the city. They culminated in the biggest clash so far on the last Friday of Ramadan, which left over 400 Palestinians and 17 Israeli policemen injured. The clashes continue and it's possible that they will become even fiercer should the court rule to evict the Palestinians living in the Sheikh Jarrah neighbourhood, fuelling the protesters' claims that Tel Aviv mistreats Israel's Palestinian population.