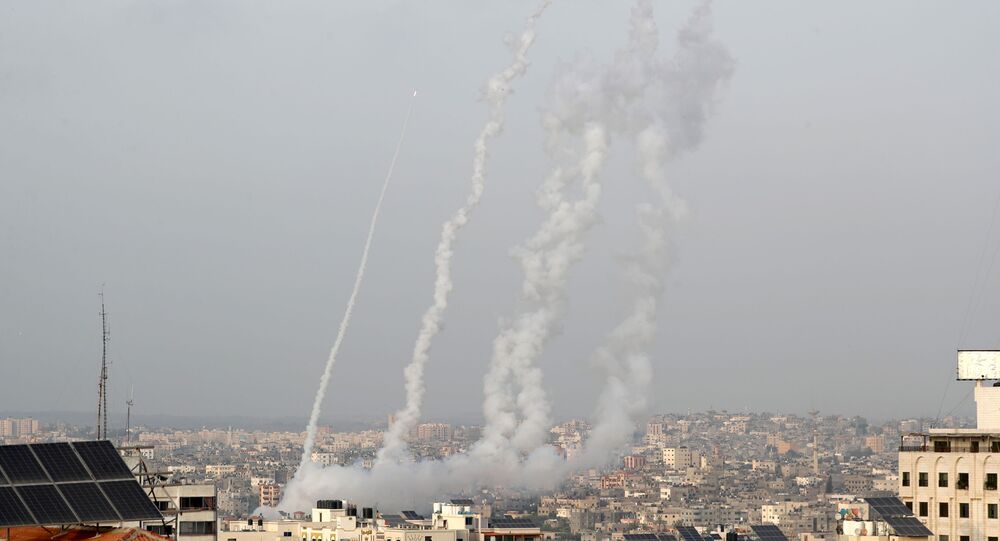 The rocket attack comes as tensions are running high in Israel in the wake of a court's decision to evict a Palestinian family from Jerusalem, triggering a series of clashes between Palestinians and the police.

A total of seven rockets have been fired from the Gaza Strip into Israel, setting off sirens in Jerusalem and Beit Shemesh and much of the country’s south, the Israel Defence Forces announced on Monday, as the nation commemorates Jerusalem Day, a public holiday marking the reunification of the city and the establishment of Israeli control over the Old City in the wake of the 1967 Six-Day War.

According to the military, one of the rockets was intercepted, while another projectile hit a civilian vehicle in the south, injuring one.

"The Al-Qassam Brigades launched a missile strike at the enemy in occupied Jerusalem in response to the crimes and aggression against the holy city, as well as the persecution of our people in Sheikh Jarrah and the Al-Aqsa Mosque", the groups' spokesperson Abu Obeida said.

He also warned that Israel had until 6 p.m. (15:00 GMT) to withdraw soldiers from the areas of the Al-Aqsa Mosque and Sheikh Jarrah in East Jerusalem.

Earlier in the day, the police and Palestinian protesters clashed outside the Al-Aqsa Mosque. The angery mob pelted stones at law enforcement officers, forcing them to resort to tear gas, rubber bullets, and stun grenades. The clash was the latest round of tensions in East Jerusalem that flared up after an Israeli court ruled in favour of Jewish settlers who claim land in Sheikh Jarrah neighbourhood, resulting in eviction of several Palestinian families.

Later on Monday, a flag parade was launched in the city as part of commemorative events for Jerusalem Day. Those celebrating, however, were denied access to the Temple Mount, which was cordoned off by the police as to avoid clashes.

A law enforcement representative told Sputnik that after the sirens went off, the police decided to wrap up the parade.