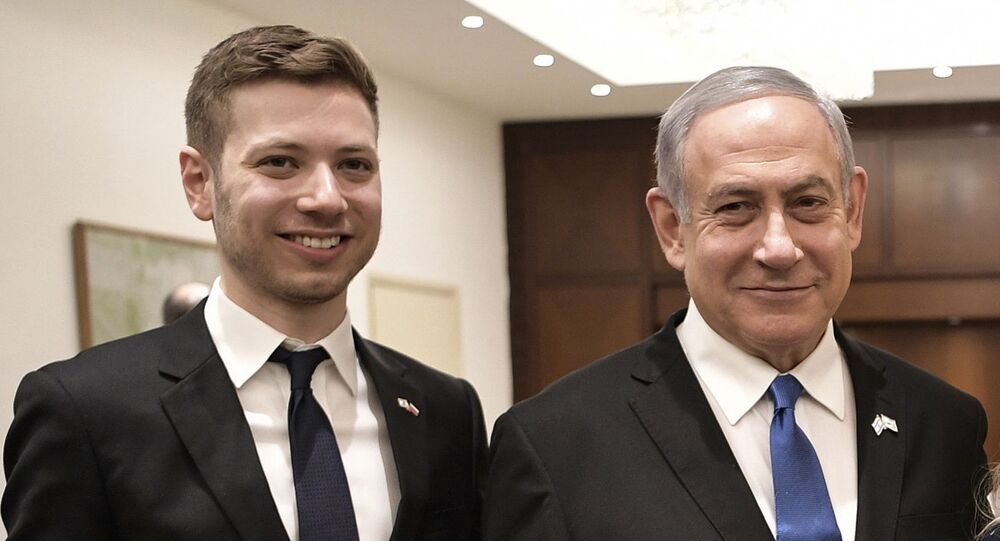 Five European powers have urged the Israeli government to "cease its policy of settlement expansion" across the West Bank as “threatening prospects for a peaceful resolution to the Israeli-Palestinian conflict". The statement came after the Israeli District Committee for Jerusalem published plans to approve over 500 housing units in the territory.

Yair Netanyahu went on Twitter on 6 May to rage against a statement by a group of European countries, including Germany, urging Israel to halt settlement-building in the occupied West Bank.

The son of Israeli prime minister Benjamin Netanyahu remarked that Berlin had better “mind its own business” and stop wasting taxpayer funds on “terrorists in the PA” (Palestinian Authority).

mind your own business in Deutschland. I heard the COVID situation is not good there (unlike in here 😉). Please stop spending your tax payer money on anarchist, communist ,anti Zionist NGOs in Israel, and on terrorists in the PA. Spend that money instead on vaccines for your >>

​The young man, known for vehemently defending his father on social media, added a reference to the coronavirus vaccination situation in Germany, which he claimed compared unfavourably to that of Israel.
He also sarcastically questioned Germany’s right to “preach” to the Jews about ethics.

>> citizens (I heard most of them didn’t got a COVID shot yet). And btw ,Germany preaching to the Jews about ethics? Hmmm

​The Twitter tirade by Yair Netanyahu came as the Foreign Ministers of Germany, the UK, France, Spain, and Italy on Thursday issued a statement calling on Israel to stop the construction of “illegal settlements” in occupied Palestinian territories.

"We urge the government of Israel to reverse its decision to advance the construction of 540 settlement units in the Har Homa E area of the occupied West Bank, and to cease its policy of settlement expansion across the Occupied Palestinian Territories," reads the joint statement.

"Settlements are illegal under international law, and threaten prospects for a peaceful resolution to the Israeli-Palestinian conflict. We call on both sides to refrain from any unilateral action and resume a credible and meaningful dialogue, to advance efforts for the two state solution and an end to the conflict."

The statement by European nations was released in the wake of plans revealed by the Israeli District Committee for Jerusalem on 3 May to approve the construction of 540 housing units to expand the Har Homa settlement between East Jerusalem and Bethlehem in the occupied West Bank.

The proposed units are to be built in the Palestinian neighbourhoods of Beit Safafa and Sharafat, thus linking the two major settlements of Har Homa and Givat Hamatos south of East Jerusalem, according to Israeli newspaper Haaretz.

In Sheikh Jarrah, a predominantly Palestinian neighbourhood in East Jerusalem, where evictions might take place, nightly clashes have continued throughout the past weeks, during Ramadan.

Dozens of Palestinians in Sheikh Jarrah may be removed from their homes in the coming weeks if the Supreme Court turns down their appeal against the pending eviction.

The neighbourhood, where a small Jewish community resided before 1948, has long been a focal point of Jewish-Arab tensions.

The current evictions are based, in part, on an Israeli law dated 1970 allowing Jews to reclaim East Jerusalem land owned by them before Israel’s 1948 War of Independence, which the Palestinians call the Nakba, or “disaster”.

After those events, Palestinian Arab neighbourhoods in the city’s south and east found themselves under Jordanian control, with areas in the north and west ruled by Israel.

© AFP 2021 / AHMAD GHARABLI
Israeli security looks on as they stand by a burning settlers car in the Sheikh Jarrah neighbourhood of Israeli-annexed east Jerusalem on May 6, 2021, amidst confrontations between Israeli security and Palestinian demonstrators in solidarity with local Palestinian families facing eviction as part of an ongoing effort by Jewish Israelis to take control of homes in the neighbourhood.

According to the Association for Human Rights in Israel, Some 358,000 Palestinians live in East Jerusalem, the portion of the city subsequently annexed by Israel from Jordan in 1967.

The area is also home to 225,000 Jewish Israelis, mostly populating newer neighbourhoods such as Gilo and Ramat Shlomo.

Jewish settlements in the Israeli-controlled West Bank are a major point of dispute between Israelis and Arabs. Up to 600,000 Israelis are now living in the occupied West Bank and East Jerusalem, and their settlements are not recognised by the UN as legal.