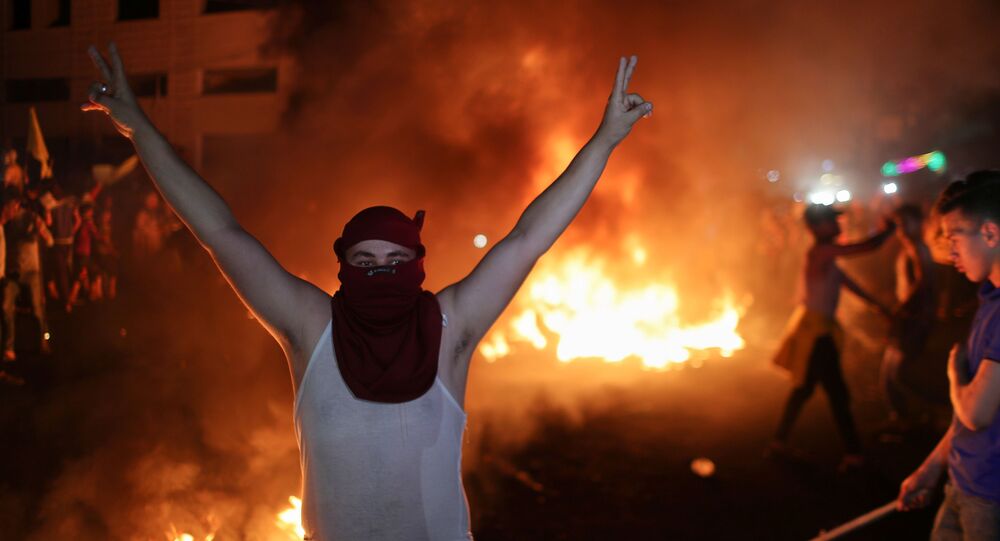 Saturday night in Israel saw a new wave of rocket attacks launched, according to the Israeli Defense Forces (IDF), from the Gaza Strip. It follows overnight fighting on Friday, as an estimated 36 rockets, according to the IDF, were fired towards southern Israel from Gaza, with Israelis conducting retaliatory strikes against alleged HAMAS targets.

New protests have broken out in Jerusalem and on the Gaza border amid several new launches of rockets from Gaza towards Israel on Saturday, with one of the rockets, according to the IDF, exploding near the Gaza-Israel security fence and another intercepted by the Iron Dome air defense system.

Israeli media reported that an estimated 700 Palestinians have been protesting near the closed Karni crossing between Israel and the Gaza Strip, with the IDF reportedly using flares and stun grenades to contain people without giving them a chance to get close to the security fence.

Video allegedly showing the IDF firing flares near the security fence was shared on Twitter.

IDF fired flares at the security fence in eastern #Gaza a short time ago. #Israel pic.twitter.com/djqiOOVyPa

Mass demonstrations were reported throughout the Gaza Strip, as thousands of Gazans hit the streets to express support for the Palestinians who live in Jerusalem. Photos and video said to have been taken in different parts of Gaza were shared on social media.

A mass rally in Beit Hanoun in the northern Gaza Strip in support of Jerusalem and the Al-Aqsa Mosque.

Palestinian youths protesting in Shejaiya neighborhood in Gaza in solidarity with Palestinians in the occupied city of #Jerusalem.#القدس_تنتفض pic.twitter.com/eYxYmwgExe

Around one hundred Palestinians were reported protesting near the Qalandiya checkpoint between Jerusalem and Ramallah, the de facto administrative capital of the Palestinian National Authority (PNA). According to The Times of Israel, citing a spokesperson for the border police, "rioters" were using firebombs, stones, and fireworks, while police were responding with "riot dispersal means".

Meanwhile, a new series of encounters between Palestinians and Israeli police has started at the Damascus Gate outside Jerusalem’s Old City. According to the Palestinian Red Crescent, six Palestinians were hurt during clashes at the gate. According to The Times of Israel, two police offciers were injured during a rock-throwing incident in East Jerusalem and one was hit in the face in the Old City.

​The surge in Israeli-Palestinian tensions takes place amid the holy month of Ramadan and was sparked by recent attacks against Jews and Arabs reported in local media.

Following the Friday overnight clashes between Palestinians and Israeli law enforcement officers and the barrage of rockets claimed by the IDF to have been launched from Gaza, Israeli Prime Minister Benjamin Netanyahu participated in a security meeting along with IDF Chief of Staff Aviv Kohavi, Defense Minister Benny Gantz, Minister of Public Security Amir Ohana and others. Netanyahu said after the meeting to “prepare for any scenario" in relation to Gaza.

PNA President Mahmoud Abbas is set to chair a meeting of Fatah’s Executive Committee on Sunday to discuss the ongoing dynamics.

“This meeting will discuss the dangerous events in Jerusalem, and to review the movement’s preparations for the electoral process, especially in the context of the Palestinian leadership’s insistence that there will be no elections without Jerusalem,” Fatah Central Committee member Sabri Saydam said, cited by The Times of Israel.

Palestinians are preparing for their first general elections in 15 years. The parliament elections in both the West Bank and the Gaza Strip are set to take place on May 22, with the presidential election scheduled for July 31.