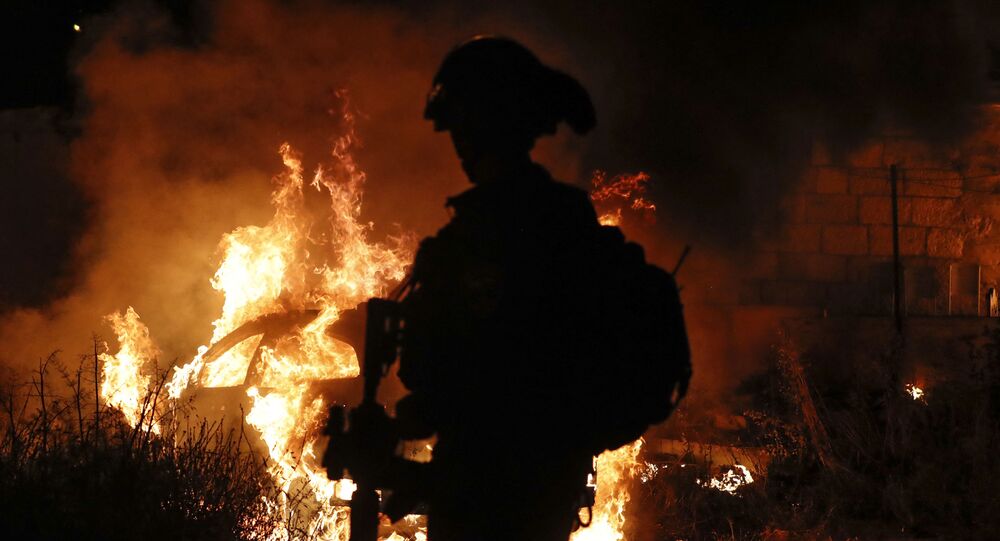 The recent weeks have seen provocations by both Jews and Arabs. The Israeli police are struggling to keep the flames low and a former Israeli army officer warns it takes only one wrong action for the situation to spiral out of control.

Jerusalem, a city which has gotten used to seeing tension and conflicts, has witnessed another surge of violent incidents in the past couple of weeks.

Mobs of young Arabs have been seen attacking Jewish civilians in the East of the city, as well as filming and then uploading videos of the assaults on social media networks. Some were caught on camera bashing cars, others were spotted attacking policemen.

For many Israelis, these and other similar incidents came out of the blue, but for Miri Eisin, a former deputy head of combat intelligence corps at the IDF, the events of the past weeks were hardly surprising, and she says they stemmed from a combination of factors.

© REUTERS / Khalil Hamra
Protests in Jerusalem and Rockets Fired From Gaza: Here's What's Going On in Israel
The first is the month of Ramadan and the tradition of Muslims to attend mass prayers at the Temple Mount, a holy site that houses the Al Aqsa mosque.

Typically, Israel, which controls access to the area and grants permits, eases restrictions to those who want to visit the holy site.

This time, however, that access was limited primarily because of the coronavirus and attempts of the Israeli authorities to prevent mass gatherings that could potentially put the health of the public at risk.

"While East Jerusalem residents are mostly vaccinated, those from the West Bank are not. Yet all of them still want to go to the Al Aqsa to pray and meet, and when this is prevented, it causes frustration and anger."

But anger is also there for a different reason. The Palestinians' international standing has been dealt a blow. Their cause has been largely neglected, especially after the Abraham Accords of October 2020 and a number of other normalisation pacts that bypassed the Palestinian Authority (PA).

A faltering economy has been a factor too. In the fourth quarter of 2020, the unemployment rate has reached 15 percent in the West Bank; 1.4 million people have been registered as living in poverty. Because of the coronavirus restrictions, Palestinians were prevented from demonstrating.

Now they are lashing out, and Israel is responding with force. Following the riots in Jerusalem, the Israeli police set up special units aimed at securing civilians.

Undercover Israeli police agents were documented beating up those who participated in riots as well as those who attacked Jewish passers-by. That, in its turn, says Eisin, caused a snowball effect.

"Israel views these [riots] from the prism of security, and it takes measures to handle them. But very often those measures turn into a catch-22, because when you bring more police officers, it eventually leads to more clashes."

The behaviour of Jewish radicals hasn't eased the tensions either. When the first assaults on religious Jews took place, ultra-right groups staged a number of rallies in the disputed city, determined to show who the boss in Jerusalem is. Palestinians viewed them as a pure provocation, incited by Hamas, Fatah and other factions. Clashes were an inevitable result.

© REUTERS / MOHAMMED SALEM
At Least 700 Palestinians Reportedly Protest on Gaza Border Amid Rocket Fire, Unrest in Jerusalem
Now, with  the fast of Ramadan coming to an end and with Jerusalem Day, that usually gathers Jewish groups from all over Israel fast approaching, the situation has turned explosive again.

Ceremonies that will mark Al-Quds day later today will not defuse tensions either, but Eisin says an escalation can still be contained.

"Everything depends on events that are hard to control. The Israeli police knows how to contain anger and not to make things worse. But it only takes one policemen, who will feel threatened and will start shooting for the situation to deteriorate."