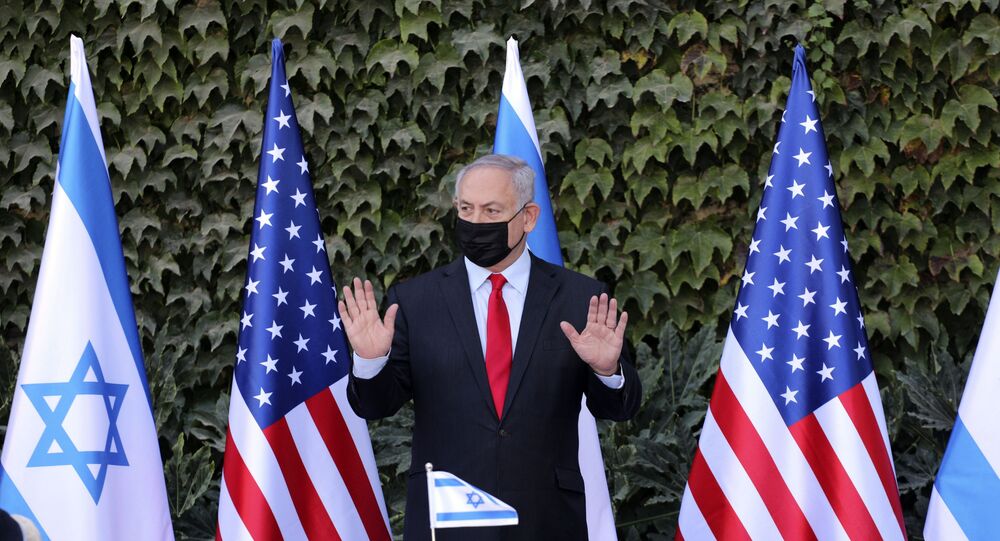 If Joe Biden gets elected, he is likely to change the approach to Iran and its nuclear programme, considered a threat to Israel. Netanyahu, in turn, might use this opportunity to present himself as the only leader that can defend the Jewish state from the Islamic Republic.

Prime Minister Benjamin Netanyahu is the latest Israeli politician to congratulate Joe Biden, after US networks announced he had become the nation's president-elect.

Congratulations @JoeBiden and @KamalaHarris. Joe, we've had a long & warm personal relationship for nearly 40 years, and I know you as a great friend of Israel. I look forward to working with both of you to further strengthen the special alliance between the U.S. and Israel.

​Even though the race for the White House is not officially over, Israeli media outlets have warned that if Trump ends up losing, his defeat will deal a severe blow to the Israeli PM.

Netanyahu will allegedly no longer have that intimate relationship that he had with Trump and it's unlikely he will have a shoulder to lean on when dealing with a number of pressing issues.

Thank you @realDonaldTrump for the friendship you have shown the state of Israel and me personally, for recognizing Jerusalem and the Golan, for standing up to Iran, for the historic peace accords and for bringing the American-Israeli alliance to unprecedented heights.

Although Biden has stated on a number of occasions that his support for Israel is "unshakeable", his policies in the region are likely to say otherwise.

© REUTERS / KEVIN LAMARQUE
No Reason for Panic: What Awaits US-Israel Relations if Biden is Elected?

On the Palestinian front, he is expected to resume assistance to the PA halted by Trump in 2018. He is purportedly set to re-open the mission in Washington that was shuttered by the current administration and he's likely to establish a consulate in East Jerusalem as compensation for the embassy the US is running in the West of the city.

With the Iranians, Biden and his administration is set to take a different approach from the hawkish line pursued by Trump. Heavy sanctions might be lifted and Washington might find itself sitting down with the Islamic Republic for talks, something that will eventually allow Tehran to keep building its nuclear reactors and something that's likely to keep Netanyahu on his toes.

And this is also something that might keep him in office. Over the years, the Israeli PM, touted in Israel as "Mr Defence", has been repeating the mantra that Tehran was working on developing weapons of mass destruction (allegations denied by the Iranians) and that he would do everything in his power to prevent them from achieving that goal.

Under Trump, he was given a lot of support. Washington didn't only walk away from the nuclear talks with Iran. It suffocated the Islamic Republic and its ally Hezbollah, a Shiite militia in Lebanon, with a number of sanctions that continue to be in place despite the coronavirus pandemic.

Now, with a Trump second term looking ever more unlikely, Netanyahu will need to fight the Iranians on his own and this is something he is likely to capitalise on if Israel ends up going to the polls again.

The prevailing mood in Israel is that another round of elections is just around the corner.

Cracks in the nation's governing coalition have existed since the moment of its inception at the end of April. The raging pandemic, which has already killed more than 2,600 people and that has caused an unprecedented economic crisis, only made the situation worse, with the Israeli media suggesting the issues will not be overcome.

Bibi's current chances of winning these elections, if they end up taking place, do not look good. A recent survey conducted by Israel's Channel 12 suggests that had elections been held today, the PM would only get 28 out of 120 seats in parliament, a stark drop from the 36 he received in March.

The prime minister's popularity is also in question. The same poll found that 32 percent of those asked still see him as fit for the position, but his challenger Naftali Bennett is getting closer, receiving the approval of 28 percent of respondents.

© REUTERS / Tom Brenner
Trump's Better for Israel, But Biden's Election Won't Be a 'Disaster', Ex-Diplomat Says
Very little could help to boost Netanyahu's ratings against the backdrop of three corruption cases and his alleged mishandling of the coronavirus pandemic.

But Netanyahu is known for the ability to reinvent himself and to use the defence card when needed.

He's done it in the past. In 1996, Netanyahu was elected because he promised to put an end to the raging Palestinian terror and in a lot of ways he achieved that goal.