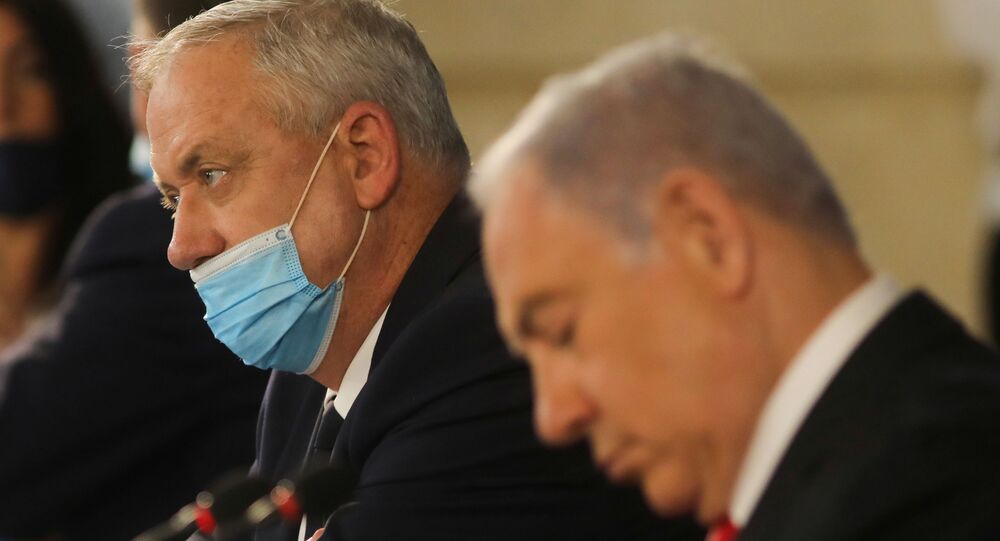 Cracks in Coalition: Will Israel Be Heading to Polls Again?

PM Netanyahu and his coalition partner Gantz don't see eye-to-eye on a number of important issues, including an upcoming annexation bill and how to handle the raging COVID pandemic, leading the Israeli media to believe the days of the country’s emergency government might be numbered.

One month after establishing an emergency government in Israel, which ended a nearly two-year political stalemate, it now seems that the coalition is starting to crack.

Created to respond to the dire economic situation caused by the outbreak of the pandemic, which has seen more than 21,000 people infected, the coalition is still struggling to stabilise the country's economy.

Before the eruption of COVID-19, the number of unemployed people in Israel stood at roughly 180,000. Now, however, estimates suggest that by August half a million Israelis will be jobless, with Welfare Minister Itzik Shmuli warning that many will be pushed below the poverty line if certain measures are not taken.

The government has already taken a number of steps to tackle the growing unemployment rate and narrow the gaps created between sections of society. These include giving incentives to employers to rehire workers forced to stay home during the lockdown and a decision to inject some $4 billion to keep the economy afloat.

That, however, was not enough. Throughout the entire coronavirus crisis and soon after the main restrictions were lifted, thousands took to the streets across Israel calling on the government to offer them better solutions.

But for the government to be able to do that, it would first need to overcome the obstacle of approving the country's budget, an issue causing major friction between Prime Minister Benjamin Netanyahu's Likud and his partners in the coalition, primarily the Blue and White alliance of Benny Gantz.

While the PM is pushing for the approval of a one-year budget, saying further planning cannot be done due to the unpredictability caused by COVID-19, Gantz finds these claims groundless and is demanding the Knesset approve a two-year budget.

Tensions have also been brewing around the use of a mass surveillance system, initially developed by Israel's internal secret service (Shabak), to track coronavirus patients.

The initiative, first implemented in March has drawn much criticism from the country's human rights groups and left-wing circles who voiced their concern over the idea of granting a body that typically spies on terrorists access to the sensitive information of ordinary citizens.

Netanyahu's push to continue using Shabak's services was also met with vehement objections by Gantz and his camp, causing the gap with Likud to widen.

Annexation as a Bone of Contention

Health issues, however, are not the only bone of contention between the coalition partners. A so-called annexation bill set to be voted on in early July is of major concern and could potentially dismantle the bloc.

In an attempt to keep his word to right-wing conservative voters, made in three election campaigns, Netanyahu is putting pressure to pass the bill. The legislation would see Israel chop off some 30 percent of the West Bank.

Gantz, who fears dire regional and international repercussions, doesn't see eye-to-eye with the prime minister, and is pushing for either a gradual or very limited annexation that would be carried out in full coordination with Jordan, the EU, and the US.

© REUTERS / Adina Valman/Knesset Spokesperson's Office/Handout
As Annexation Deadline Looms, Netanyahu Realises Bill Will Be Tough Nut to Crack
Reports suggest divisions were so deep that multiple meetings held between the two on the matter have resulted in an impasse, with Gantz even allegedly reluctant to see the maps Netanyahu was working on concerning the boundaries between Israeli and Palestinian territories under the annexation plan.

While on Monday, it seemed the two leaders had agreed on the main principles of annexation, reports have since emerged that Gantz has put forward several conditions, including giving Palestinians the ability to move freely between their territories, granting equal rights to those that will be absorbed by the state as a result of annexation, and providing the Palestinian leadership with carrots rather than sticks in the form of monetary benefits.

Netanyahu sees Gantz's demands as hesitation to move forward and believes that while the latter is dragging his feet, Israel might miss out on the historic opportunity which might be taken off the table after the US elections in November.

And while Gantz is hesitating, his party continues to sink in the polls. A recent survey has suggested that if elections were held today, Gantz's Blue and White would only receive 13 seats in Israel's 120-seat parliament, dropping from its current 15-seat level.

Netanyahu, on the contrary, seems to be gaining more popularity. The aforementioned survey predicted the PM's Likud would get 41 seats, despite his corruption charges and trial that kicked off in May.

These results would allow the prime minister to establish a more homogeneous coalition relying on religious parties rather than Blue and White, with its centrist views, a scenario that Netanyahu wanted all along.

Taken together this is why the Israeli media has begun to speculate, that encouraged by his growing ratings, the PM might want to take a risk and dismantle the coalition, pushing the country to another round of elections.