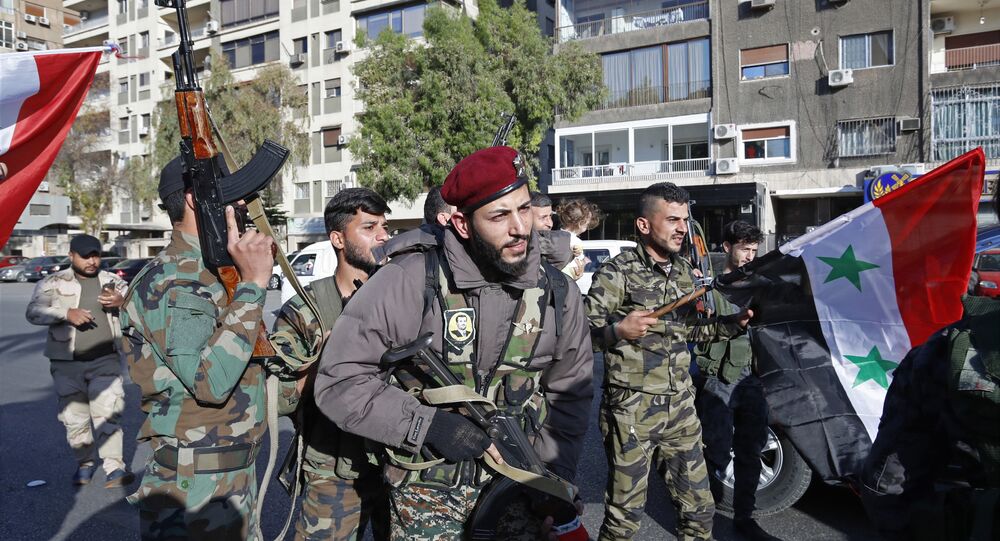 US is Methodically Ruining Syrian Economy But Damascus Has Tools to Avert the Pressure, Prof Says

Damascus is making an effort to stabilise the economic situation in the country hurt by the war, the COVID-19 outbreak and US sanctions. Economist and writer Dr. Ibrahim Alloush has explained what steps should be taken to bring Syria back on the peaceful and prosperous track.

On 21 October, President Bashar al-Assad exempted more low-wage earners from income tax, as Syrians are suffering from the steep rise in prices and the depreciation of the Syrian pound. The Syrian Arab Republic is struggling with an economic crisis caused by the coronavirus pandemic, the nine-year-long war, large-scale emigration, energy and food shortages, and a crumbling industrial base.

To make the situation even worse, the US and allied Kurdish militias have cut the Syrian people off from their oil and gas resources, while Washington slapped new sanctions under the Caesar Act on the Arab Republic this year. In addition to this, unidentified fighters set thousands of acres of crops and olive orchards on fire in the country.

Militias affiliated with foreign actors as well as Daesh* remnants are involved in burning up the Syrian crops of wheat and barley, says Dr. Ibrahim Alloush, economist and lecturer at the University of Damascus, adding that jihadists are openly bragging about this on Facebook.

"Most recently, millions of olive trees have been burnt down right before they were due for reaping on the coastline and elsewhere in the country, specifically in regions controlled by the Syrian state, especially where olive oil is a major source of livelihood for the inhabitants", the economist stresses.

Energy Shortages Due to Sanctions, Gas & Oil Grab by US

On the other hand, the country is facing severe energy shortages. Oil and gas are especially important, being used in such sectors as transportation, generating electricity, manufacturing, agriculture, etc., the academic says, emphasising the necessity to break the energy embargo as soon as possible to breathe new life into the country's economy.

However, the US and the Kurdish-dominated Syrian Democratic Forces (SDF) are currently controlling over 90% of Syria’s known oil wells, and more than half of its gas wells, which happen to be located east of the Euphrates in the energy-rich parts of the country such as Deir ez-Zor, Raqqa and Al-Hasakah.

"The US-induced scarcity of oil and gas in Syria, a country which was energy self-sufficient before the war, led to a general decrease in the amount of goods and services produced in the economy, electricity rationing, and price increases which wouldn’t have occurred otherwise", Alloush explains. "This is compounded by Western sanctions targeting the Syrian energy sector specifically, in addition to other sectors in the economy, which complicate efforts to make up local energy deficits through importation."

On the other hand, Western sanctions have also dealt a heavy blow to investments and financial transfers into Syria, he highlights.

"As a result, Syria’s Gross Domestic Product (GDP), estimated at 60 billion US dollars in 2010, has witnessed successive contractions in the early years of the war, with growth rates in the negative double-digits per year", he says. "Obviously, this has led to drastic decreases in the standard of living of Syrians as represented by GDP per capita, which is obtained by dividing GDP by the number of people residing in the country. Needless to say, poverty, in absolute and relative terms, malnourishment, and a general impoverishment of the population have been the natural outcomes of such a state of affairs."

US Efforts to Axe the Syrian Economy

The academic believes that what the people of Syria are witnessing now is an outcome of a decades-long policy rolled out by the US and its allies to tear the Syrian economy to tatters. He recollects that Washington adhered to this ploy in the late 1970s, with a gradual tightening of sanctions on Syria over the decades.

In the course of its latest phase, the Syrian infrastructure was deliberately and methodically deconstructed between 2011 and 2020 "with the elimination of the copious cash flow which tourism used to bring into the economy every year, with the looting and burning of factories, much of which were shipped off to Turkey, and with the general disorder that inflicted the economy due to foreign interventions", Alloush elaborates.

Predictably, this led to a contraction of the number of goods and services produced in the economy as well as a decrease in exports, tourism, and foreign direct investment, which substantially diminished foreign demand for Syrian Pounds.

"At the same time, government revenues decreased with a dwindling economic cycle, and government obligations (due to the war and its social effects) increased", he explains. "So the ratio of the amount of money circulating in the economy relative to the quantity of goods and services increased. This necessarily means inflation, i.e., a general and continuous rise in the price level, and with that, the Syrian pound started tumbling."

Ways to Revive the Syrian Economy

Although the situation looks dire, the country still can overcome the crisis by halting the depreciation of the Syrian Pound and runaway inflation in the first place, says the economist, adding that to this end "the quantity of goods and services produced in the economy needs to be increased".

"Every possible measure that can be taken to jump-start manufacturing, agriculture, internal tourism, and internal trade should be considered a matter of strategic priority", he stresses.

Meanwhile, the sanctions regime could actually become an opportunity for Syria "to build a base of self-sufficiency in certain areas of the Syrian economy in which the country is already endowed with resources to satisfy many basic needs", according to Alloush.

"Encouraging small businesses enterprises with government-sponsored exemptions, loans, and aid can elicit a historically well-established business-oriented culture in Syria", he says. "Drawing up plans to integrate different sectors of the economy so agriculture produces inputs for manufacturing, e.g., cotton for the textile industry, so manufacturing produces inputs for agriculture, e.g., phosphates for fertilizers, or so universities and researchers produce ideas and projects for improving productivity using local resources in all sectors of the economy that can be scrutinized and adopted by financial institutions, etc should all become daily practice if Syria is going to survive and flourish under the siege."

To kick off this process and reinvigorate the Syrian economy, Damascus needs investments and financial aid from its allies, says the economist, referring to Russia and Iran in the first place.

Last month, a delegation from Russia led by Deputy Prime Minister Yuri Borisov and Foreign Minister Sergei Lavrov visited Damascus to discuss the potential ways to circumvent US sanctions, deal with the energy and food shortages and start reviving the Arab Republic's economy. The countries' jointly defined economic tasks were discussed in detail by the co-chairs of the Intergovernmental Commission on Trade, Economic, Scientific and Technical Cooperation, Minister of Foreign Affairs and Expatriates of the Syrian Arab Republic Walid Muallem.

*Daesh (ISIS/ISIL) is a terrorist organization banned in Russia and many other countries.