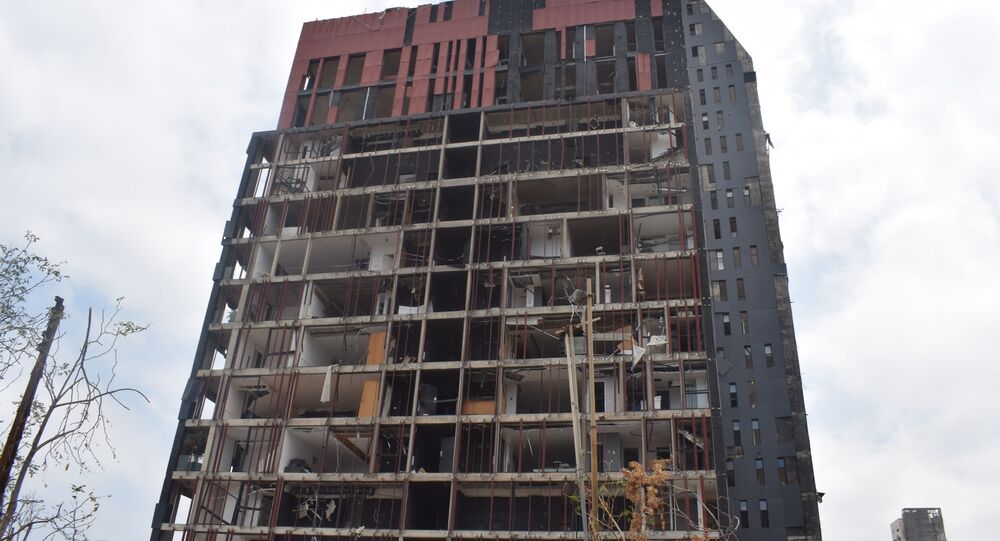 Beirut Resident: It's Painful to Look at What is Left of My House After Explosion

On 4 August, a powerful explosion ripped through the Lebanese capital of Beirut, killing dozens of people and injuring thousands, while also leaving the city in ruins.

It's been more than a week since the explosion at the port of Beirut, and the scale of the tragedy is becoming more evident.

According to the High Relief Commission, the explosion damaged or completely destroyed about 70,000 buildings, leaving 300,000 people homeless. Many of them were forced to temporarily settle with their relatives in other Lebanese cities as there is simply no one else to help them.

Before resigning earlier this week, the Lebanese government approved a series of measures to help the victims of the explosion, including providing temporary shelter for those in need and helping to rebuild damaged and destroyed homes. However, due to a large number of domestic problems, the package of measures is advancing sluggishly.

Nadin Nader who lives in the Mar Michael district of downtown Beirut has revealed what happened to her house.

"Our house was almost completely destroyed after the explosion. Thank God, at least our children and we are alive and well", she said.

Nadin pointed out that her family has not received any help from the state. They're staying with relatives in the Bsalim area, which was not affected by the explosion.

"Before everything happened, my eldest daughter had a stomachache, my husband and I took her to the doctor – as if the Lord was trying to warn and save us. My youngest son and daughter stayed at home with our foreign housekeeper. We saw the explosion when we already were in the car. Like everyone else, we didn't understand what was happening, we thought it was a bombing. We immediately rushed home – it was badly damaged. We saw our housekeeper under shards of glass – she died of blood loss. But the children, thank God, were barely hurt. She covered them with herself", Nadin said.

Mayor of Beirut Jamal Itany explained that Beirut Municipality was counting the houses that are capable of being restored so that they don't waste time on buildings that cannot be rebuilt. According to him, the municipality has provided accommodation to resettle the victims, but few are seeking help.

"We are ready to help everyone who has ended up homeless after the disaster. The city has a number of new buildings that we are ready to use as temporary housing for the victims. Moreover, a number of municipalities closest to Beirut have come up with a similar proposal. The victims have where to turn to, and there is someone to help. However, very few people turn to the municipality for help: many are afraid to leave even destroyed houses, fearing looters", he said.

In turn, Simon al-Ashkar from another downtown area of Beirut, Al-Jamiz, said that his house wasn't even visited.

"I don't have another house, and now I don't have this either. The explosion damaged the walls and broke all the windows. I myself miraculously survived: the glass collapsed right on me. But, thank God, I'm alive, my children took me to their place. But it's painful to look at what is left of my house. And I'm not sure that the state will provide at least some kind of assistance: no one even came to estimate the damage. But we are not used to relying on officials: they only demand that we pay taxes, but don't help in return when needed", he said.

Meanwhile, the Lebanese Army has announced a constant patrol of the affected areas to avoid vandalism or looting.

The explosion of more than 2,000 tonnes of ammonium nitrate at the port of Beirut on 4 August, which is believed to be the cause of the blast, left at least 170 people dead and thousands injured. According to the authorities, 300,000 residents became homeless after the explosion.