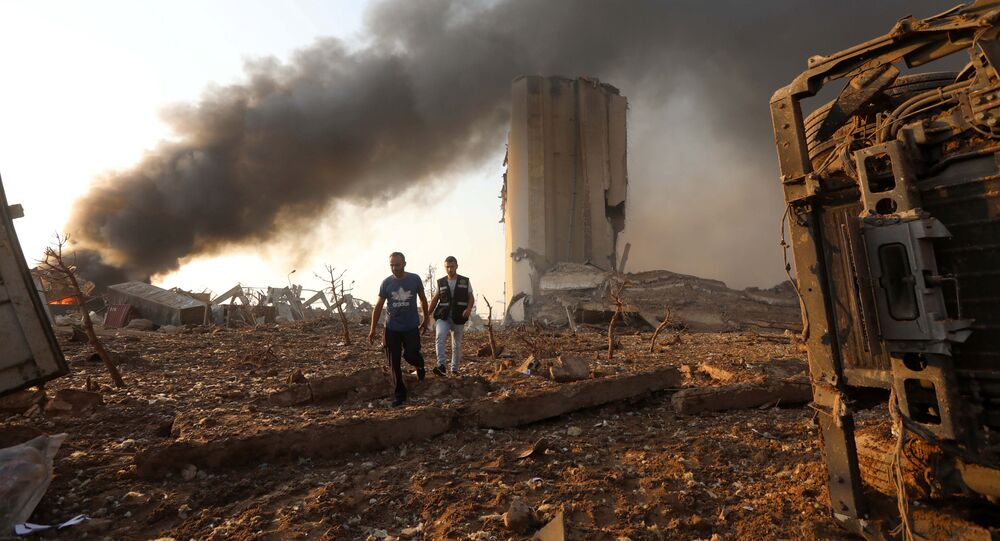 On 11 August a public vigil was held for more than 200 people who died as a result of the explosion that also injured more than 4,000 and left as many as 300,000 homeless. The damage from the blast is estimated at $3 billion.

A new video depicts the disastrous aftermath at a hospital in Lebanon's capital Beirut after a powerful blast ripped through the city. The Saint George Hospital has 230 cameras that recorded the incident from different angles.

The chilling footage shows severe destruction - knocked out windows, splintered wood and concrete. At one point in the video a nurse miraculously survives when the room she's in collapses following the blast wave that hit the hospital. Seventeen people died in the clinic as a result of the explosion, including patients, medical staff, and visitors.

CCTV obtained exclusively by Sky News shows multiple angles inside the Beirut hospital as it was hit by the blast.

​Professor Georges Juvelekian was holding a consultation in the hospital at the time of the explosion. He said he would have bled to death if a colleague had not assisted him.

"We should be proud of what we've done. What this hospital did in eight hours evacuating over 300 patients to safety despite the lack of power and glass everywhere and unsafe environment and lack of resources is a miracle by itself and speaks to the greatness of these people", said Professor Juvelekian.

On 11 August a public vigil was held for more than 200 victims of the blast. Despite the Lebanese authorities meeting the demands of the angry public and the whole government resigning, demonstrations have continued in the capital. Protesters blame the authorities for mismanagement and corruption which led to the tragedy.

The powerful blast was caused by 2,750 tonnes of ammonium nitrate – a chemical compound used in agriculture as a fertiliser, and also as part of an explosive – stored unsafely at a warehouse in the port since 2014. Prime Minister Hassan Diab, who took office in January, refused to take responsibility for the incident and blamed it on his predecessors and the corrupt political elite.

However, according to Reuters, which cited obtained documents, the country's security officials warned Mr Diab as well as Lebanon's president last month that the chemical compound was highly dangerous and could destroy the capital, if it explodes.