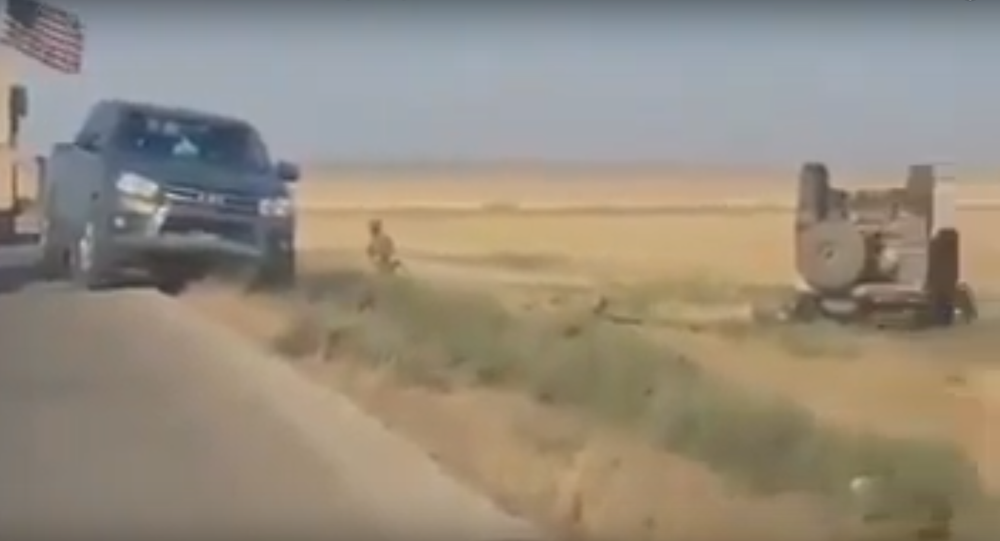 The Syrian Arab News Agency has obtained footage of the scene of the accident where a Combined Joint Task Force Operation Inherent Resolve servicemember died on Tuesday.

The footage shows a US MRAP truck, laying upside down in a field about 10-15 meters off the road, with one vehicle beside it and more vehicles, one of them flying the American flag, stationary on the road.

At least one other soldier is reported to have been severely injured in the incident, and was transported to nearby US medical facilities.

The incident reportedly took place Tuesday evening in the Tell Tamir area, a small town in western al-Hasakaha governorate located at the strategic M4 Aleppo-Mosul highway and near a major roadway between the city of al-Hasakah and the Turkish city of Diyarbakir.

US coalition forces in Syria confirmed in a statement early Wednesday that a serviceman had been killed, indicating that “initial reports indicate the incident was not due to enemy contact.”

The traffic accident comes a week after multiple explosions rocked ammunition facilities and a regional headquarters of the US-backed Kurdish Syrian Democratic Forces (SDF) outside the city of al-Hasakah, with as many as 10 militiamen reportedly wounded in the attacks. No group claimed responsibility, although Kurdish reports from on the ground suspect a Turkish drone may have been involved in the strikes. The SDF is fighting Turkish-backed militants in northern al-Hasakah province, with both sides, as well as Syrian and US forces, also fighting Daesh remnants in the region.

© AP Photo / Spc. Zoe Garbarino
US Serviceman Dies in Syria Presumably Not as Result of Combat Operations
Control of the oil and gas-rich territories of northern Syria is divided between multiple competing factions, with US President Donald Trump announcing his plans to “keep” Syria’s oil in late 2019 after pulling troops back from the Syrian-Turkish border. The Damascus government has demanded that all foreign forces which haven’t been invited into Syria by its internationally recognized government to leave immediately.

US military convoys driving through Al-Hasakah and the neighbouring region of Deir ez-Zor have regularly faced standoffs with local civilians and Syrian troops, with locals often parking vehicles, setting up road blocks or forming human chains to try to prevent coalition vehicles from driving through their communities. Most of these incidents transpire without incident, with coalition forces turning around and searching for another way to reach their destination.