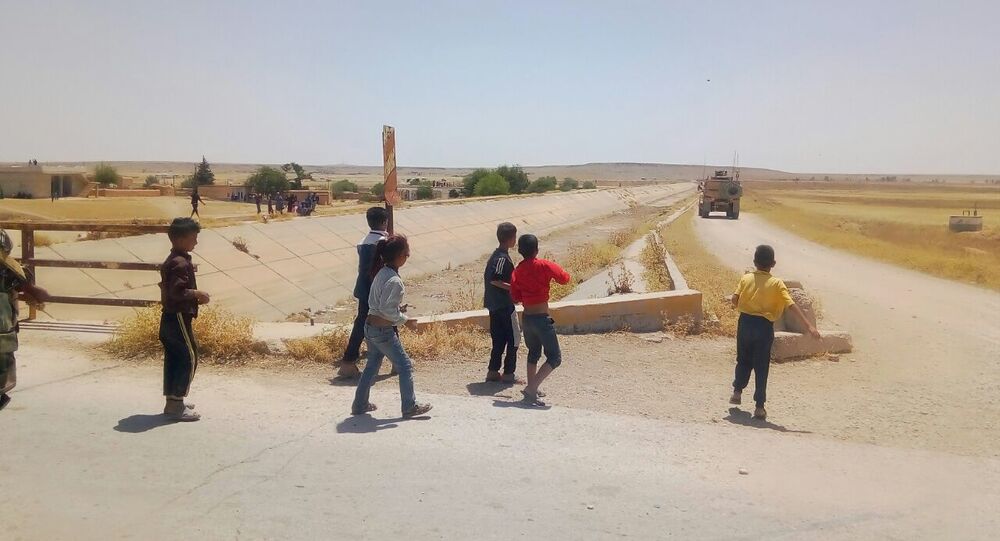 US forces remain in Syria despite having no legal basis such an invitation from the government or UN Security Council mandate to carry out operations there. Washington continues to ignore demands by Damascus and members of the international community to withdraw its troops illegally stationed there.

Four armoured US military vehicles were stopped by Syrian Army forces while attempting to cross a checkpoint on the M4 highway in the province of Al-Hasakah near the suburbs of Tall Tamer. The American military convoy was travelling towards the village of Derdara as it tried to cross a sliver of territory in the country's northeast controlled by the Syrian Army, and was forced to turn back.

But as the convoy was turning to drive away from the checkpoint, locals poured out from their homes to express their discontent with the presence of US forces. Videos and photos, shot by a local Sputnik correspondent, show how around a dozen children living near the checkpoint started pelting the leaving American military transport with stones.

According to the accounts of one of the Syrian soldiers, guarding the checkpoint, the US troops tried to negotiate a passage to Derdara, but were forced to turn around and go back in the direction of Tell Beydar. It's unclear what the US mission was, but over the last year they have mainly been tasked with guarding oil fields in the country's east, largely controlled by the Kurdish militia.

This is not the first time an American military convoy has faced opposition and disdain from Syrian citizens during their operations in the country. Such incidents often happen in Al-Hasakah Province, where Damascus has an "enclave" of territory along the M4 highway in the middle of Kurdish-controlled territory.

One such incident took place near the city of Quamishly, where a US military convoy was confronted by residents on 14 February 2020 and started shooting at locals as it retreated, reportedly killing a 14-year-old boy and wounding one man. A representative of the US-led coalition, operating in Syria, claimed that the American forces were just exercising their right to self-defence because they were allegedly attacked by local residents.

However, both the US and the entire US-led coalition's forces are stationed and operate in Syria without any legal basis. They never received a UN Security Council mandate to do so and were not invited by the Syrian government, which demands the immediate withdrawal of illegally stationed troops from its territory. The continuing presence of US forces in Syria has also been condemned by some members of the international community, such as Russia and Iran.

Watch Troops Force Another US Convoy to Turn Around, Go Back Where It Came From in Northeast Syria