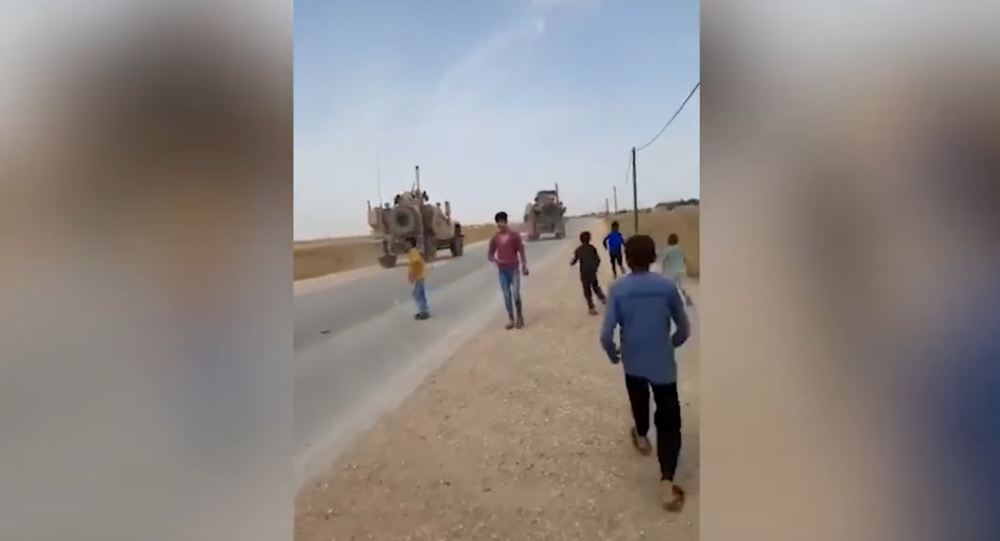 The eastern Syrian provinces of al-Hasakah and Deir ez-Zor remain a major source of tensions between Damascus and Washington amid the ongoing tense standoff between Syrian forces, local civilians and US troops and their allies.

Children and teens in the villages of al-Qahira and al-Dushaisha in the al-Hasakah countryside have intercepted a convoy of US military vehicles, pelting it with stones.

Video of the incident provided by the Syrian Arab News Agency (SANA) shows more than a dozen children, some as young as 5-6 years old, picking up stones and throwing them at the tan trucks, one of them flying an American flag, and running after them as they drive down the road honking their horns.

A SANA correspondent said the children forced the vehicles to head back in the direction they came from, although it is not clear from the video if this is the case. The Pentagon has not commented on the incident.

The occurrence was just the latest in a series of dozens of similar incidents reported in rural al-Hasakah communities in recent months, with locals, occasionally flanked by armed Syrian army personnel, setting up roadblocks using makeshift barriers or vehicles and attempting to stop US convoys from driving through. The confrontations usually end without incident, with convoy vehicles often turning around and heading back in the direction they came from.

Things have occasionally turned violent, however. In early May, US servicemen reportedly opened fire on a civilian vehicle near the Conoco gas field, killing one person. On Wednesday, Syrian media reported that several US troops and members of the predominantly Kurdish Syrian Democratic Forces militia were attacked and injured in a village straddling the administrative border between al-Hasakah and Deir ez-Zor. No group claimed responsibility for the ambush, but the area is known to be a hotbed for Daesh (ISIS)* remnants and Turkish-backed militants who took part in last year’s abortive Turkish invasion of northern Syria.

The Syrian government has repeatedly demanded that all uninvited forces leave its territory immediately, and vowed to eventually bring all occupied territories back under the central government’s control.