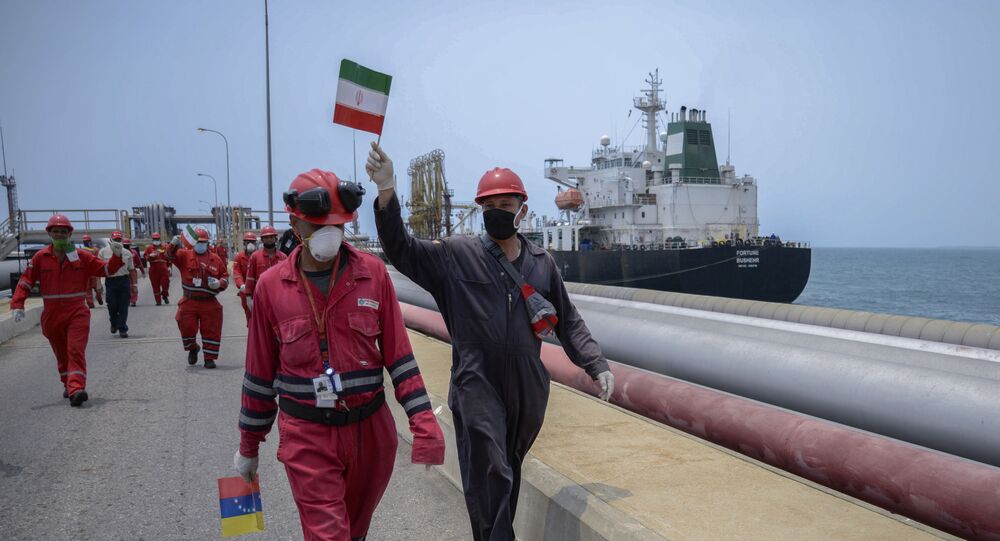 Major General Hossein Salami, the chief commander of Iran’s Islamic Revolutionary Guard Corps (IRGC) has praised the Islamic Republic's resolve to send fuel tankers to Venezuela in the face of US threats to take action against Tehran and Caracas.

"We showcased our might, and our biggest display of power was the imposition of our will [on the enemies] and the sailing of [oil tankers] through high seas from the Persian Gulf towards Venezuela", Salami told reporters on Wednesday.

He also argued that currently, Iran is "witnessing the rapid decline of our big enemies, particularly the US".

The remarks come after Iranian Foreign Ministry spokesman Abbas Mousavi indicated Tehran’s willingness to go ahead with its oil shipments to Venezuela if "Caracas demands more [such] supplies from Iran", which Mousavi added is practicing "its free trade rights with Venezuela".

Mousavi spoke after the five Iranian tankers, the Clavel, the Faxon, the Fortune, the Forest, and the Petunia, in May delivered more than a million barrels of oil to Venezuela, hit by a serious fuel shortage caused by US sanctions.

The statement followed The Wall Street Journal citing unnamed US officials as saying last month that the Trump administration is considering new sanctions and "other legal steps to disrupt Iranian oil exports to Venezuela", in response to what Washington sees as Tehran's attempts "to make inroads into Latin America".

While the White House did not confirm the report, Mousavi, for his part, warned that the US may "suffer repercussions that arise out of any unthinking measure [that it could take]" against Venezuelan-bound Iranian fuel tankers.

"Should the Americans take any measure against our vessels’ free and legal movement around, they would face our decisive response", Mousavi said at the time.

The warning came after Iran denied what it described as "baseless" allegations by US Special Representative for Venezuela Elliott Abrams who asserted that Tehran is supplying Caracas with equipment needed to restart the South American country's refineries in exchange for gold from Venezuelan reserves.

Tehran also blamed Washington for trying to destroy the Venezuelan economy, suggesting that Abrams’ allegations were made to justify the US slapping new sanctions on both countries.

Iran, Venezuela Under US Sanctions

Washington started introducing harsh economic sanctions against the Venezuelan economy, which is in the grip of the ongoing crisis, back in 2018 in an effort to oust democratically elected President Nicolas Maduro.

As far as Iran is concerned, the US reinstated its restrictive measures against the Islamic Republic in May 2018, when President Trump announced Washington's unilateral withdrawal from the 2015 Iran nuclear deal, also known as the Joint Comprehensive Plan of Action (JCPOA). Exactly a year later, Tehran said that it began suspending some of its JCPOA-related obligations.