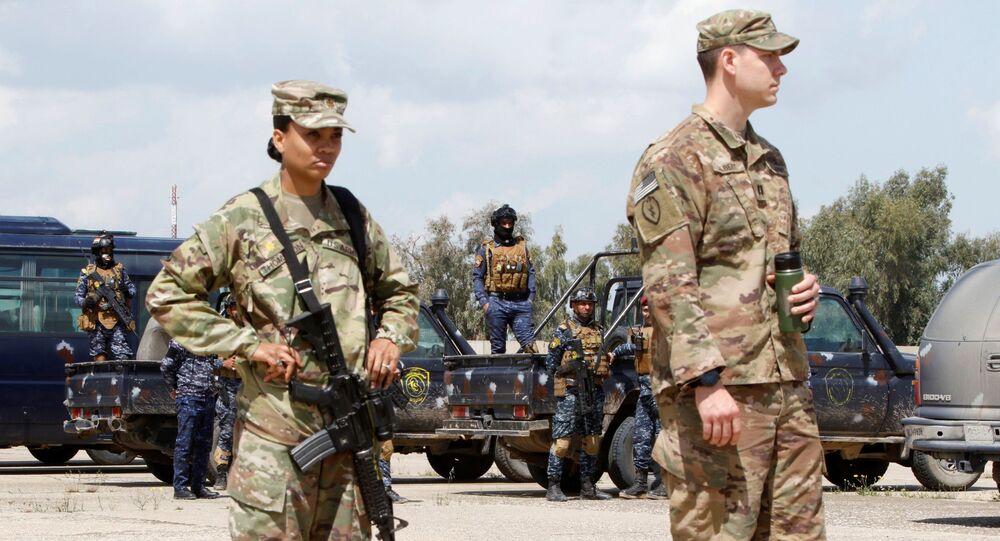 On Sunday, the US-led coalition officially handed over the K1 Air Base in northern Iraq’s Kirkuk province to the Iraqi Army in a pre-planned move that they said was unrelated to recent attacks by Shiite militias against Iraqi bases hosting foreign troops.

The US-led international coalition’s headquarters in the northern Iraqi province of Nineveh near the Syrian border has been transferred to Iraq’s army, the country’s Baghdad Al Youm news outlet reports.

According to Baghdad Al Youm, the coalition forces transferred the Nineveh headquarters on Monday as part of the process of withdrawing foreign troops from some Iraqi provinces.

At the same time, the news outlet says, the US forces are rapidly completing the construction of a base near the city of Erbil in Iraqi Kurdistan, which may become one of the largest military bases in the Middle East.

The Monday handover came after Brig. Gen. Vincent Barker, the sustainment director of the combined Joint Task Force – Operation Inherent Resolve (CJTF-OIR), said late last week that the coalition had transferred the K1 Air Base in the northern province of Kirkuk to the Iraqi Armed Forces.

© REUTERS / ABDULLAH RASHID
Iraqi Army officers wear protective masks, following an outbreak of coronavirus disease (COVID-19), as they walk with U.S. officers before a handover ceremony of U.S.-led coalition forces to Iraqi Security Forces as part of a drawdown of coalition troops at the Nineveh presidential palace, in Nineveh, Iraq March 30, 2020

Barker described the base as a “critical location for the coalition, the ISF [Iraqi Security Forces] and Iraqi Counter Terrorism Service in the fight to find and destroy ISIS [Daesh*] safe havens in the rugged Hamrin Mountains”.

“It will continue to be a key location in our partnered efforts to eliminate the evils of Daesh. Today’s transfer was coordinated with the government of Iraq and is possible thanks to the efforts and successes of our ISF partners", Barker said on Sunday.

The coalition, in turn, referred to a successful campaign against Daesh conducted by the Iraqi military as the reason behind the transfer of K1, adding that the move was pre-planned and unrelated to the spread of COVID-19 in the Middle Eastern country or recent attacks by Shiite militias against Iraqi bases hosting foreign troops.

This followed US forces formally handing over control of the Qayyarah Air Base in Nineveh province to the ISF on Thursday in what Barker described as “another milestone for the anti-ISIS international military coalition and our Iraqi Security Forces partners”.

“The Qayyarah base served as a strategic launching point for the ISF and coalition during the Battle of Mosul. The base serves as a hub for the Iraqi Air Force, who continue to deliver lethal strikes on Daesh bed-down locations”, he pointed out.

The developments come after the coalition reportedly announced earlier this month that they are departing from several of their smaller bases in Iraq after several recent rocket attacks against them, and that these bases remain under Iraqi control as the coalition will continue its “advising partnership for the permanent defeat of Daesh from other Iraqi military bases”.

This was preceded by two rocket attacks hitting coalition troops near Baghdad, killing two American soldiers and a British servicewoman. The attacks prompted massive strikes against local Shia militants by the US-led coalition.

The strikes against the coalition forces came after the US had announced that it would move air and missile defence systems into Iraq to defend against ballistic missile and drone threats. Washington blamed the attacks on Iranian-backed militants, but Tehran has rejected the accusations.

Iraq warned the US and other foreign forces against using attacks on the coalition troops as a pretext for unauthorised military action in the country. The US command claimed they had consulted with Iraqi authorities about the "defensive" strikes, but it was not clear if Baghdad had approved them.